In the year 2018, Aquasharks is not a word that would turn many heads apart from the occasional hardcore adult LEGO fan. For the younger crowd, Aquasharks is an underwater LEGO theme from the 90’s that had some imaginative set designs and play features like magnets (which, admittedly, were everywhere back then). As opposed to some other themes from the same years, this particular one doesn’t seem to get much love from the online LEGO community, but luckily Jonas Obermaier is here to give it five minutes of glory… perhaps this time we won’t forget about it again? 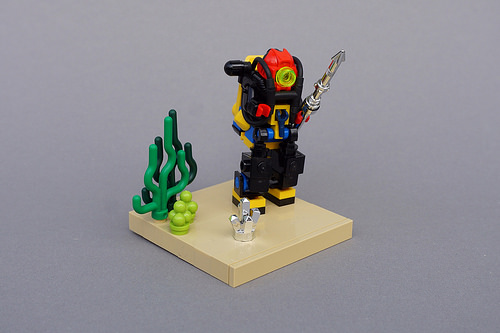 The build is technically a hardsuit, but the heavy use of minifig parts (the core of the top half is based on the Aquasharks SCUBA gear) blurs the line between a heavily modified minifig and a compact mecha. With the builder’s skills in minifig design, this is hardly surprising. All sorts of small colourful parts capture the motif of the Aquasharks prints, and with enough imagination, the dark blue minifig hand in the center of the torso could look like a shark symbol!