This article is the third and final installment in a series. Read about the LEGO Grumman E-1 Tracer Part 1 and Part 2 here.

In the last four weeks, I have been building a LEGO scale model of a Grumman E-1 Tracer aircraft. Part 1 described how I planned the build, and part 2 dealt with how I built some of the difficult bits; in this, the third and final part, I explain how I built the last bits, and present the finished model. 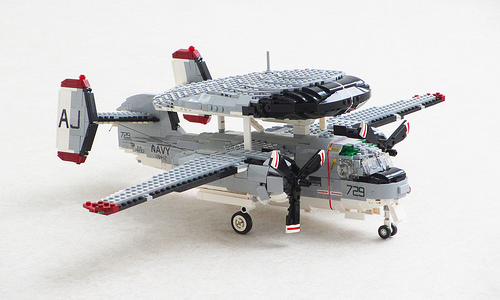 For weeks this build seemed to progress really slowly. I know that for some builders September means building huge spaceships. It took me most of this month to build just the radome, the nose, the wings and the engine nacelles. When I started building the fuselage, however, it felt like I had reached the home stretch. All of a sudden things went really quickly. Building the final parts wasn’t necessarily easy, but certainly easier. It was great to see the collection of separate sections come together into something that looked like an aircraft. The anticipation of seeing the end result motivated me. So, here it is.

Although there is hardly a straight line on the fuselage, fortunately for about two-thirds of the length its width is pretty much constant. Getting the shape right was now mainly a matter of giving the top and bottom the proper curvature. 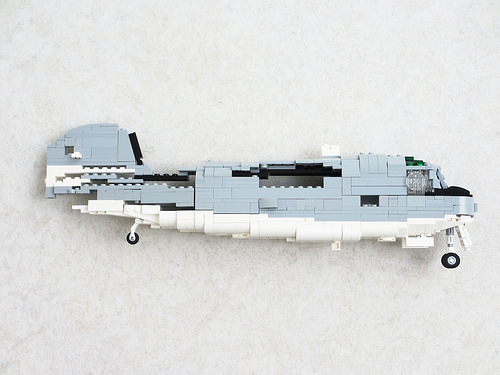 Building curves isn’t all that hard, as long as you take small steps. For the bottom, I used steps of a single plate at a time. I made the curve shallower as I got near the lowest part of the fuselage by increasing the distances between the steps. The plan I described in part 1 — creating drawings on graph paper based on reference photos — really helped with this. I did the same on top. After building a few more bits and bobs (the supports for the radome and the propellers), I turned my attention to the tail and aft fuselage. Each half of the oddly cranked tailfin is attached to a single tile with a clip. This is not particularly sturdy, but there was really no room for anything else. A white click hinge connects both halves and keeps them at the proper angle. 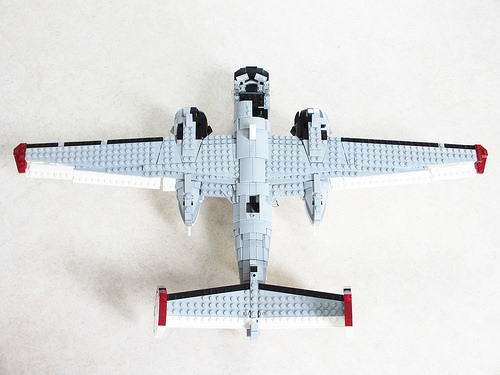 The aft fuselage sides taper, which I did by mounting them at an angle using plate hinges. I built the sections that covered the upper and lower holes separately. I then built the internal structure to hold everything together. Building things from the outside in is a bit awkward. It means taking things apart and putting them back together loads of times, but ultimately it’s the outside that matters.

I had now reached a major milestone. I could put the whole thing together for the first time! It is tail-heavy, but so is the real aircraft. The engineers at Grumman fitted the Tracer with a little tailwheel to keep it from tipping over. I added a few lights to the tail, a little piece of string to represent a wire antenna, and the small antenna mast on top of the radome. This was a moment to take take a step back and look the whole thing over, to see whether I missed anything.

All that was left to do was to apply some stickers. This is not to everyone’s liking, I am sure, but in the sixties US Navy aircraft tended to have fairly bright markings. These don’t always lend themselves well to being brick-built. Of course, I do what I can using LEGO, but I do use stickers for text and things such as warning arrows and the “star-and-bar” national markings. I make most of them using a computer graphics program, matching their backgrounds to the colour of the LEGO. I then print them with an inkjet printer on thin paper, cut them and attach them with thin adhesive tape. This is a fiddly job, taking an hour or two, but it adds a lot to the look of the model. 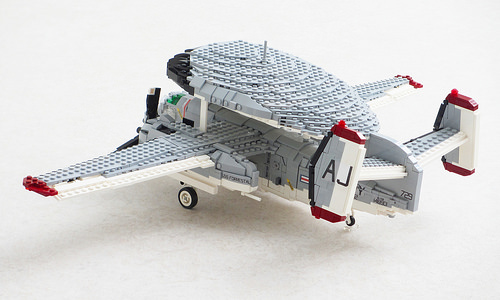 Building this comparatively tiny thing may have taken me four weeks, but it is certainly one of the more interesting shapes in my LEGO aircraft collection.

Read Part 1 and Part 2 of this series here.

Check out more of Ralph’s creations, such as the LEGO Antarctic LC-130 Hercules that actually went to the South Pole, the A-3B Skywarrior, or the US Marine Corps Sikorsky UH-34D Seahorse helicopter.