The war in Vietnam was the first in which helicopters weren’t mainly used for resupply missions or as flying ambulances, but were a central element in newly developed tactics. In ‘Search & Destroy’ missions, helicopters flew troops into countryside controlled by Communist insurgents in order to, well, seek them out and destroy them. The troops would then be helicoptered to another location to repeat the procedure. I will spare you the details, but the insurgents had their own ideas about this and things often didn’t work out all that well. 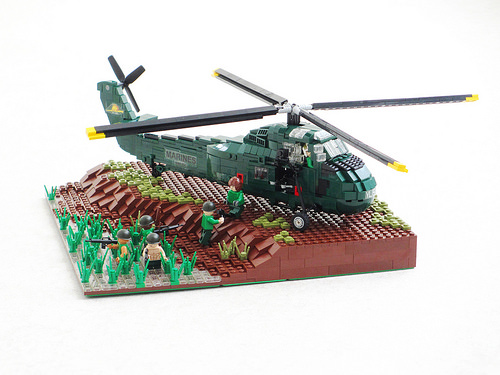 My latest model represents a US Marine Corps Sikorsky UH-34D Seahorse helicopter on just such a mission, picking up troops from a rice paddy somewhere in South Vietnam. The helicopter most people will associate with the war in Vietnam is the UH-1 Huey. Consequently, there already are really nice LEGO Hueys out there. I wanted something different, so I built the Seahorse instead. Because this will be part of a larger collaboration, the model represents something of a departure from my normal style. It is minifig scale, I built the helicopter with only a few visible studs and I’ve used some third-party accessories in the form of BrickArms weapons and helmets.

For a few years, I’ve combined my summer holidays with attending Brickfair Virginia. One of the great things about attending LEGO conventions is getting to know fellow builders in person. Last year, over a few beers, a Magnus Lauglo, Aleksander Stein and I started discussing doing something collaboratively, instead of each of us building our own stand-alone things. 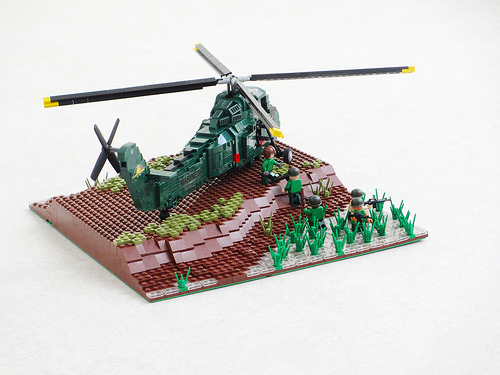 Since we grew up watching Full Metal Jacket, Apocalypse Now and Tour of Duty, we picked Vietnam as a topic. It ticks multiple boxes. While I doubt there have been many celebrations, 2018 marks the 50th anniversary of the Tet-Offensive, which was a watershed event in the war. Vietnam is also slightly out of our comfort zones. We either don’t build scale models of historic equipment, dioramas or we don’t build for minifigures. If you want to depict some history, however, minifigures are indispensable. So, the idea to build several minifig scale scenes was born and we invited a few more of our friends to participate. Given the role that helicopters played in the war and my love for flying machines, this helicopter is my first contribution. Minifigures are fun and they add life to a scene, but they are awkwardly proportioned. Building the Seahorse such that two figures could sit side-by-side in the cockpit without it becoming so large that it would dwarf any figures standing next to it was a challenge.

Expect to see me feature more of the builds as they appear in the next few months. If everybody sticks to their plans, we’ll see a few with an unusual twist.

1 comment on “Search and Destroy with the Sikorsky Seahorse”