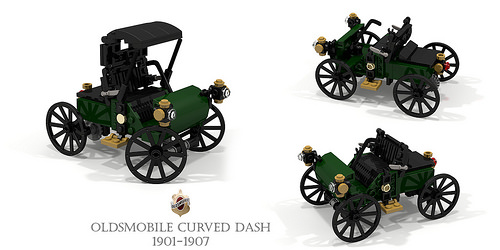 By the time the teens rolled around, motor vehicles were still largely carriage-like while developing their own identity at the same time. When it comes to luxury cars from this period, the Silver Ghost is considered one of the most iconic. The Silver Ghost line had a long run, with production spanning 1906 through 1926. Peter’s Silver Ghost is a fabulous 1914 boattail model, a name which is derived from the boat-like sculpting of the rear section of the body. I’m partial to this model’s combination of dark green and dark orange (representing woodgrain), as well as fun little details like the serpent-shaped horn. 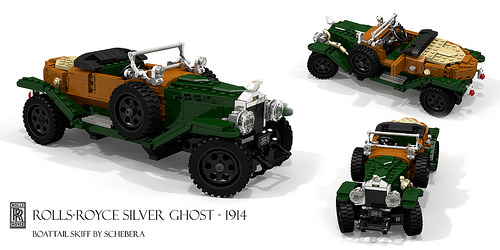 In the 1920s, cars began looking less like carriages thanks to a greater use of curves. Back then, the Packard Motor Company was one of America’s premier luxury car manufacturers, often winding up in the hands of politicians, movie stars, and socialites. Peter’s Town Car is representative of the 1922 model year and packs a lot of character. I’m really digging the red and white disc wheels, and the mechanical droid arms as landau irons look spot-on. 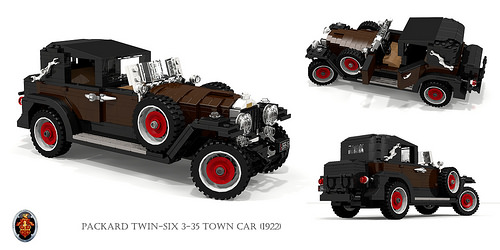 The stock market crash of 1929 gave way to a lengthy economic depression, causing the untimely death of a large majority of auto manufacturers. Despite these circumstances, the major remaining players in the automotive industry were looking forward, and the 1930s was the decade that introduced the concept of streamlining in motor vehicle design. In particular, the Chrysler Airflow (1934-1937) was one of the more drastic examples of streamlining from this period, with its heavily rounded grille and teardrop shaped body. To advertise the body’s strength, Chrysler produced a quirky video showing a 1934 Chrysler Airflow pushed over a cliff and driven away. I don’t know if I would want to try that with Peter Blackert’s LEGO Airflow, but it looks pretty sharp. The use of 2x1x2/3 slopes with slots tilted at subtle angles works amazingly well for the curved grille. 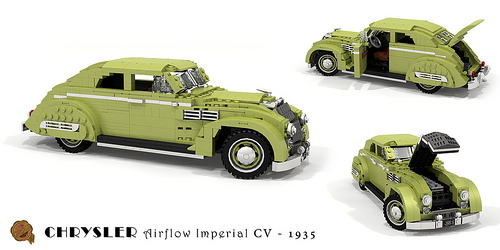 Production of automobiles was halted throughout the duration of World War II so that car makers could engage in manufacture to support the war effort. In the first few years after the war, the return to normalcy was slow and American manufacturers were making vehicles that were largely repackaged variants of their prewar offerings. In Europe, the road to recovery proved even more daunting but the emphasis on rebuilding would help war-torn countries like Germany and Austria. It was within this context that Porsche released its first production car in 1948, the 356. Before the war, Ferdinand Porsche built his fame on developing the Volkswagen Beetle and drew inspiration from this car when designing the 356. Peter’s rendering of the famous Austrian sports car consists of elegant curves, and the use of metallic silver minifig barbell weights as headlights is inspired. 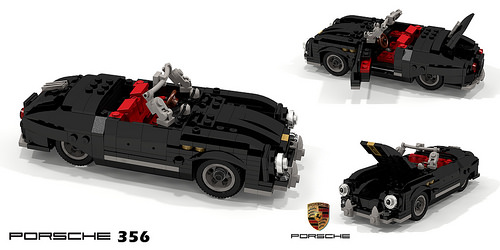 In the U.S., the 1950s signaled a drastic departure from the previous decade. This was the age of chrome and fins, a reflection of America’s entrance into the jet age. Chevrolet’s Corvette was unveiled in 1953 as a part of General Motors’ Motorama exhibit and commercially sold as a 1953 model later in the year. On a technicality, the Corvette may not have been America’s first modern sports car but it was arguably America’s first wildly successful sports car. Peter Blackert’s LEGO model sports a white body with red interior upholstery, which was the only available exterior/interior color combination for 1953. It is every bit as stunning as the original. 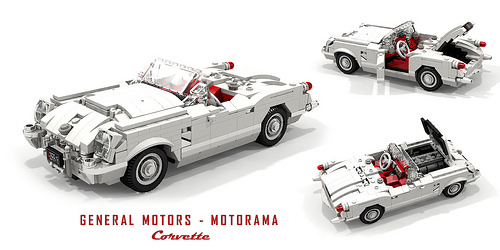 Fins began to taper off in the 1960s, while luxury cars looked larger than life. Chrysler’s answer to the luxury car market was the Imperial, which was designed to compete against elite automotive heavyweights, Cadillac and Lincoln. Peter chose to model the elusive 1964 Imperial Crown Convertible, making sure to build the 413 cu in V8 engine under the hood. The LEGO Imperial looks every bit as massive as the original and elegant in red. It even features the iconic split grille. 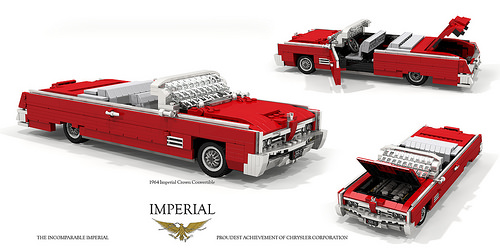 5 comments on “Motoring through the ages with Peter Blackert”