While this creation by MemeLUG member Micah Beideman definitely looks amazing, I still have to ponder the practical benefit of a fence underwater. All joking aside, this is indeed a pretty sweet re-imagining of a LEGO Atlantis set, Gateway of the Squid. 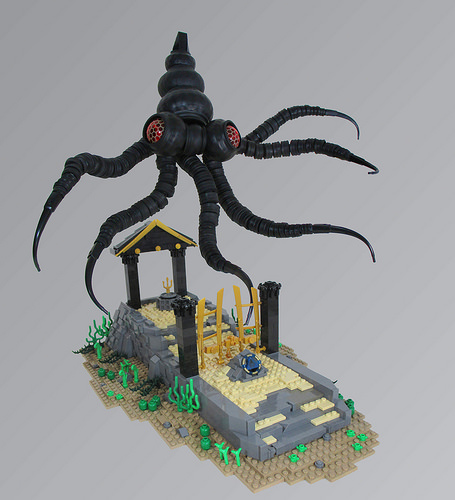 The base looks somewhat rushed or simple until you take a closer look at it, with some nice textured stone walls in the back and very well placed vegetation. The little temple and titular gateway are not bad either. The main focus of the build is the squid though. It is not the first time we have seen inverted tyres used as organic texture, and it is not the first time the builder used this technique either, but he still managed to sneak in a bit of a unique twist with the printed 4×4 domes as eyes. I am personally always wary of using inverted tyres, because their shape and texture is hard to match with other bricks. Micah did not seem to have such problems, as the tentacle elements and a wedge slope used as the tip of the squid’s conical body flow very well with the tyres.