The first Flagship store opened in Disney Resort in Shanghai back in May 2016 and was the largest LEGO Brand store in the world back in its opening. 2 years later, The LEGO Group has announced its second store scheduled to open in Autumn (end of the year) at Shanghai ShiMao Festival City in People’s Square located in the heart of the city. The new store is expected to be slightly more than half the size of the Disney Resort Store at 6297 sq feet (585 square meters) over two floors. In comparison, the first store was around 10,764 sq feet spread (1,000 square metres)  over two floors.

Last year, the Shanghai Skyline LEGO Architecture skyline was revealed and with this new store in place, it is another stepping stone for LEGO’s growth in China. Read our review of the Shanghai skyline here. 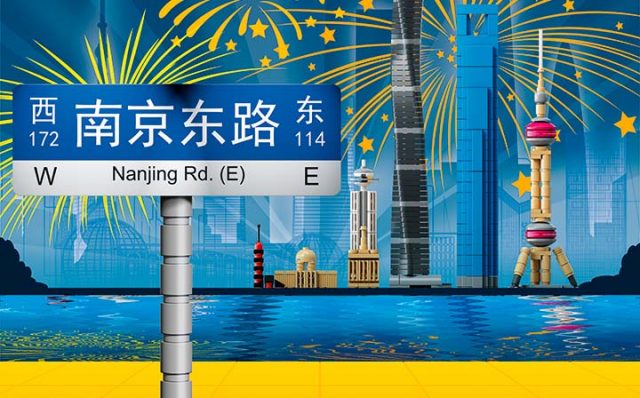 Shanghai, China – 12 April 2018: The LEGO Group, one of the world’s leading manufacturers of play materials, today announced the beginning of construction of a new flagship store at People’s Square, Shanghai, a central area of the city. Scheduled to open this Autumn, it will be the group’s second flagship store in China providing a fun new landmark for both local families and LEGO® enthusiasts from around the world.

“Opening our second flagship store in China reconfirms our long-term commitment to the country and our dedication to bring creative LEGO play experiences to Chinese consumers. It will bring more opportunities for Chinese children, parents and LEGO fans of all ages to enjoy high-quality engagement with the LEGO brand, while at the same time creating a friendly and inspiring environment even for those who are taking their first steps in creative building.”
Covering 585 square metres over two floors inside Shanghai ShiMao Festival City in People’s Square, the new flagship store will feature a unique LEGO personalisation experience – the first of its kind in China – allowing guests of all ages to interact with LEGO bricks in creative and innovative ways.

“The opening of a flagship store in the very heart of Shanghai is an important milestone for LEGO Retail in China. People’s square is a unique place, which has an important historical meaning for the local community, but also is a key point of attraction for many visitors from all around the world.

“Our ultimate objective is to provide families in China with an opportunity for quality time together above and beyond shopping, and therefore we are going to introduce innovative play experiences for our guests to interact with the LEGO brick in creative and fun ways as never seen before in Asia, as well as LEGO personalization experiences, allowing visitors to create and purchase a unique memory of their visit of the store.”

Located in an area that has long been regarded as the heart of the city, the new flagship store is the latest to be announced worldwide by the LEGO Group, following the openings of LEGO flagship stores at Shanghai Disneyland and Leicester Square, London.
The new store is expected to create approximately 45 permanent jobs in Shanghai’s Huangpu District. Recruitment will begin in April 2018.

1 comment on “LEGO to open its second Flagship Store in Shanghai, China [News]”