Amongst LEGO space themes, Ice Planet 2002 is one of the most unique, and it’s beloved by many nostalgic LEGO fans who grew up in the 90s. What is unique to Ice Planet 2002 is how important the environment is to the build; seeing the iconic ice pillars, blue ice, and orange windows really facilitates the nostalgic feeling in a fan creation, perhaps more so than it would in other similar themes. Chris Perron ticks off most of the boxes with this cheerful build of a penguin transport. 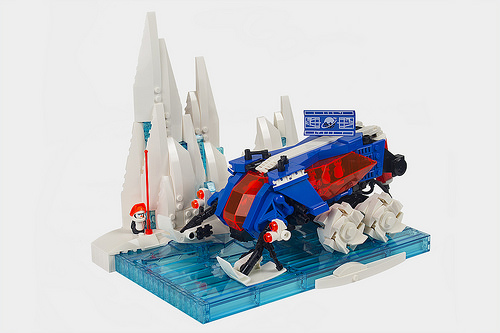 This is not Chris’ first creation in this theme, and we see here what he has learned from the earlier “study”. The balance between colours is perfect and the build style reflects the original theme well. Across the vehicle there are numerous textures that are mostly done in black and just a bit in blue too. The brick-built wheels are well done too. Scenery is always important, and this particular model is a prime example. Wedge slopes represent the snow pillars perfectly, but the translucent blue ice is really the important part — especially the odd “rock” element included adds just a bit of texture to the surface.