Welcome to Day 19 of our LEGO Advent Calendar countdown. Each day, we’ll reveal the three mini-builds from the LEGO City, LEGO Star Wars, and LEGO Friends 2017 advent calendars along with commentary from our team. 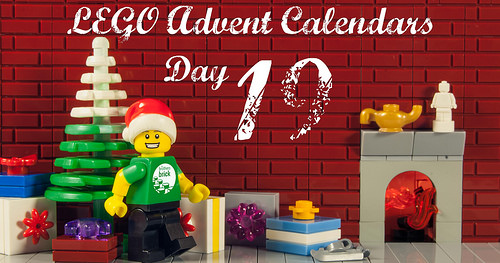 If you’re opening one (or more) of these advent calendars along with us, we’ve made sure the pictures and commentary on each day’s models will be behind a jump and posted in the evening every day, so we don’t accidentally ruin the surprise. What surprises will we be granted for Day 19?

For Day 19, we have a Christmas tree from City, mini TIE Striker from Star Wars, and another sled from Friends. 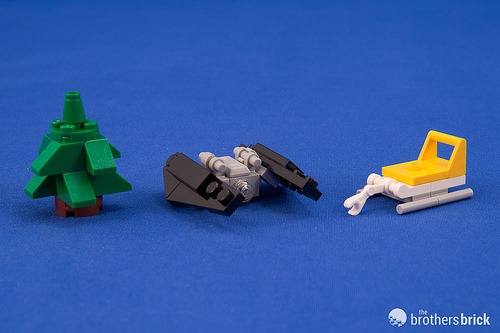 Chris: I like this City Christmas tree. It’s simple, but it works. The TIE Striker is also about as good as I’d expect for a model at this scale, and the plain grey “gold bar” element on top adds some neat detail. And oh look, it’s another sled for Friends.

Dave: The City tradition of always having a Christmas tree lives on, though this year’s isn’t as festive as year’s past. You can add a few of the colorful 1×1 studs as ornaments under the slopes to add a bit of color and texture. The TIE Striker from Rogue One (a mini version of this bigger set, now 30% off at Amazon) kind of achieves the right profile but the connections cause the wings to be separated too far from the cockpit. As for Friends… sigh.

Edwinder: A Christmas tree, a Star Wars ship, and some sledding fun. Having just watched the The Last Jedi, I wonder if the Star Wars universe has Christmas, or any other celebrations (aside from the disastrous Life Day in the Star Wars Holiday Special)?

Elspeth: Nice little Christmas tree from City. The ingot and 2×2 wedge plates are good parts in the TIE fighter. And yawn, another sledge.

Daniel: Wow… another sled. At least the designers are trying to mix up the builds a bit. I also like the City tree. The TIE Striker is pretty good, although something about the wing attachment looks off to me… maybe too much like a Clone Wars gunship. Anyway, still fine for this scale. 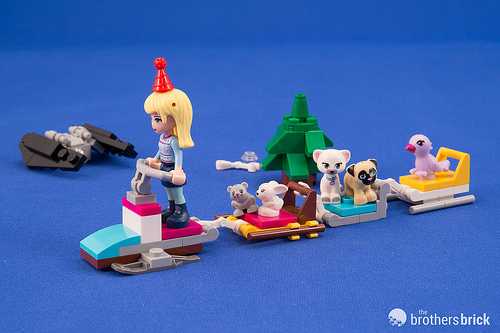 Chris: Here’s the whole Friends sled parade strung out. It’s really not as bad once you get to this point, but I hope any little kids that are opening one door each day for this advent calendar are very, very patient. One complaint I still have is that there are more critters than spots on the sleds for them. For this image, we balanced them on the sleds with others, but really, they don’t fit.

Dave: Friends really shines for the first time in this calendar, bringing all the sleds and animals together so far. Perhaps by the end of the month, there will be more playability with the Friends calendar because it is so cohesive from beginning to end rather than so many disjointed small builds and minifigures? Also kudos to the designers for at least constructing the sleds differently each time for variety’s sake.

Edwinder: Okay, I’m thoroughly impressed with this because it finally makes sense to have all the related bits connected to each other. Overall you lose the feeling of a daily surprise, but you gain by getting a better combined build at the end. I wonder if they could so this with the other two advent calendars in the future. A mini-Hoth scene built day after day? Or now possibly Crait?

Daniel: Seeing all the sleds fit together is nice, but it would have been easy to make them fit more critters.

Elspeth: Ahhh so it was actually a chain gang of sleds. Makes more sense now. It looks like the TIE Striker is about to solve the “more critters than seats” issue!