Welcome to Day 10 of our LEGO Advent Calendar countdown. Each day, we’ll reveal the three mini-builds from the LEGO City, LEGO Star Wars, and LEGO Friends 2017 advent calendars along with commentary from our team. 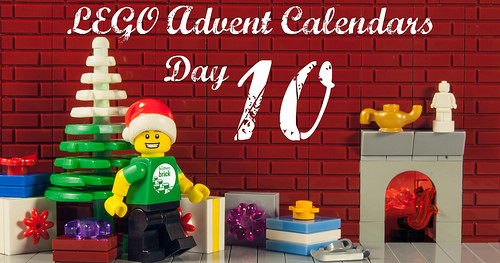 If you’re opening one (or more) of these advent calendars along with us, we’ve made sure the pictures and commentary on each day’s models will be behind a jump and posted in the evening every day, so we don’t accidentally ruin the surprise. Once again, what’s in Day 10?

For Day 10, we have a mini-plane from City, an Unkar Plutt’s thug minifigure from Star Wars, and a microphone stand from Friends. 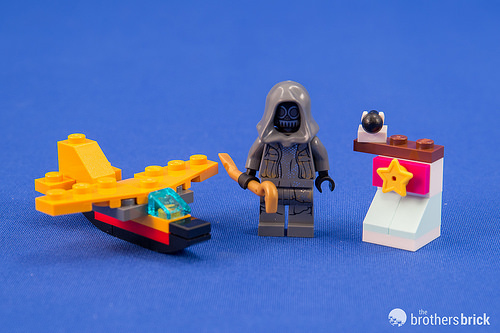 Dave: The plane is a great mini-build and I love the black inverse baby bows. Bright light orange must have been readily available since both City and Friends sets have featured the color heavily. Unkar Plutt’s Thug has only ever appeared before in Rey’s Speeder, ironically enough, and his pearl gold crowbar is reasonably hard to find too. The Friends microphone stand is just… sad, though that solid black, unprinted microphone piece has only ever appeared in previous advent calendars.

Chris: The little air attack fire plane is actually quite cool. I think it’s likely supposed to be a Canadair CL-415 “Super Scooper”, which is impressive that it’s recognizable at this scale. The Thug is a really cool cyberpunk-looking figure, so I’d never be disappointed to get another one of those, even if it weren’t Star Wars. And, honestly, the microphone and stand aren’t horrible. Ok, maybe it’s just that my standards have been lowered by the rest of this Friends calendar, so this one looks better by comparison.

Daniel: I am sensing a trend in the City models, as this makes three vehicles so far (four if you count the sled), two of them flying. This IS a nice seaplane.

Luka: Friends trailing behind again, even with the exotic colours, Star Wars brings another figure (great one) and City is a good build again, with a nice selection of parts. No surprises today (ironic, since the advent calendar is supposed to contain 24 surprises)!

Edwinder: For the life of me, what’s that Friends colorful thingamajig? A lectern of sorts? For everything else here is a poem: Father Christmas by night, Unkar goon by day; Presents galore by dark, gift grabber by light; Sleigh rides are chores, Plane dives adore. 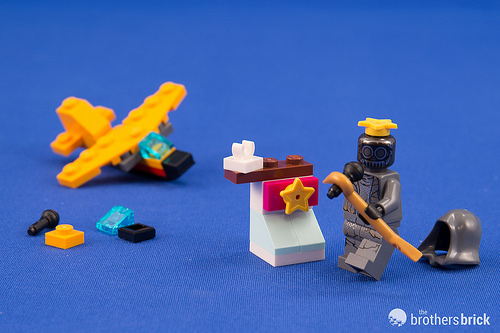 Edwinder: Someone’s had wee bit too much to drink last night and is a little tipsy. I think someone spiked Santa’s Egg Nog. (Or, Unkar’s grog?)

Andrew: Oooh, Unkar’s Thug turns out to be a Sith like Savage Opress or Darth Maul! Oh wait, that’s just a flower on his head.

Dave: I am growing weary of magenta jumper plates, though if your singing is so bad you can crash a plane, maybe you should take up knitting instead.

Luka: When you are in such a hurry for the talent show that you crash your plane when landing it.

Chris: I don’t know why that Thug with the flower on his cracks me up so much. But I do know that crowbar makes an excellent mic stand. And I think the fire plane crashed, just like seven of the real ones. Flying over fires is dangerous.