Welcome to Day 6 of our LEGO Advent Calendar countdown. Each day, we’ll reveal the three mini-builds from the LEGO City, LEGO Star Wars, and LEGO Friends 2017 advent calendars along with commentary from our team. 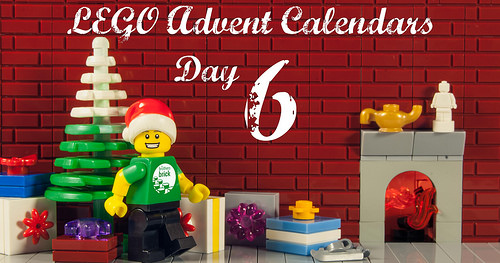 If you’re opening one (or more) of these advent calendars along with us, we’ve made sure the pictures and commentary on each day’s models will be behind a jump and posted in the evening every day, so we don’t accidentally ruin the surprise. What bricks will we get for Day 6?

For Day 6, we have a model propeller plane from City, a mini First Order Transporter from Star Wars, and a snowboard ramp from Friends. 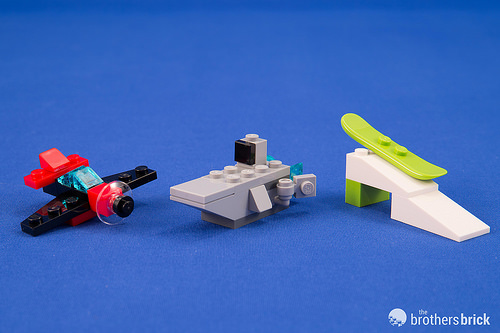 Chris: The plane’s not great, but then again, it’s not terrible either. The First Order Transporter looks the part, but it’s basically a WWII amphibious assault craft, so it’s not one of the more inspired designs from the Star Wars universe. Over in Friends land, you get the world’s simplest snowboarding slope, made of just three elements. Apparently LEGO thinks girls can’t build.

Dave: I like the appearance of the toy plane’s spinning propeller, and the mini-Stormtrooper transporter really captures the feel of the vehicle. But, c’mon Friends… you are better than this. (At least the snowboard has only ever been made in lime green once before in this year’s Friends Snow Resort Ski Lift.)

Edwinder: Extreme sports (I think)! Propeller plane wins hands down! Something finally worthy of a micro build. The transporter looks like a whale to me for some reason, but hey, I have a wild imagination! And look! A snow slope launcher! You go girls! (But really now…  LEGO, you can do better.) [Four exclamation points in a row. That’s a new record. -ed.]

Luka: As always, City wins in the originality department. I think that is because it does not have a source material with a six-billion-dollar investment behind it, so it needs to make up for it with imagination. Star Wars, while the bricks are useful, does not deliver with its design. As for Friends, I can only comment on it in the form of a question: Hey LEGO, how well do Friends calendars sell?

Daniel: I agree that this Star Wars ship is pretty accurate for the scale, but there are a few other things from that movie that would be cool in this size model, like a toppled AT-AT, for instance.

Chris: It’s a plane taking off of a slope, with a mountain, green rolling hills and a river in the background! (…It seemed more clever at the time.)

Dave: In our defense, it was late and we didn’t have much to work with for this day. But look! Extra parts, yay!

Edwinder: Chris has a wild imagination, and I don’t think I could have done any better with these.

Daniel: Do you want me to get out and push?

Alexander: It that a mountain? At first I thought it was a tiny model of the Eiffel Tower, and now I want my own Architecture advent calendar.