Welcome to Day 3 of our LEGO Advent Calendar countdown. Each day, we’ll reveal the three mini-builds from the LEGO City, LEGO Star Wars, and LEGO Friends 2017 advent calendars along with commentary from our team. 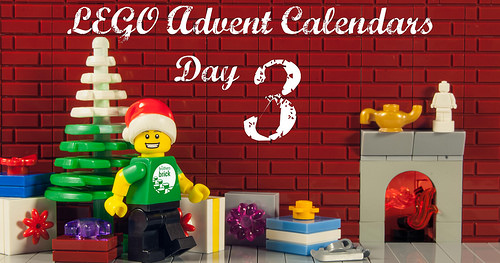 If you’re opening one (or more) of these advent calendars along with us, we’ve made sure the pictures and commentary on each day’s models will be behind a jump and posted in the evening every day, so we don’t accidentally ruin the surprise. So what did Day 3 hold?

For Day 3, we have a raging fireplace from City, a mini Phantom from Star Wars, and a bunny slide from Friends. 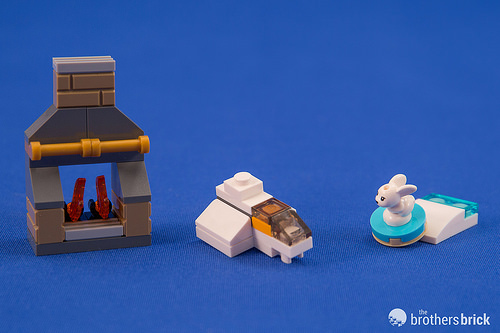 Chris: The fireplace is nice, if a bit simple. But honestly, for the part count, that’s probably as good as anyone could do. The little mini Phantom model is recognizable. It’s hard to do justice to a blobby ship in this scale, but I like the clip used for the nose guns. Now, let’s talk about this bunny slide (because that’s the only thing I can figure out that it might be). It’s, well, hilariously bad. I tried it over and over, and the bunny on the little sled just doesn’t work. This has got to be one of the lamest play features of all time.

Dave: The fireplace is a little bare and needs a hanging stocking, but the Phantom is fun. Plus we get a few extra parts! As to the bunny, perhaps I was too optimistic that the Friends Advent Calendar was off to a good start…

Edwinder: There’s a reason why that fireplace was made. It’s meant to burn the rest of the other two build bits: the Phantom ship that I mistook as an Imperial shuttle and the roasted bunny for dinner.

Luka: Looking at the parts value, I love the fireplace as every single piece is usable in most situations. Second is the Star Wars ship, but given the license and higher price, its value is automatically lower by my personal standards. The Friends Day 3 gift is cute, but animals always raise the price or lower the parts count and are less often useful than plates, tiles and bricks. My favourite piece from all three builds: the trans-black 1×1 tile in the Phantom.

Daniel: As a fan of the Star Wars Rebels cartoon, I love the Phantom! It makes me wonder if the Phantom 2 will show up later. 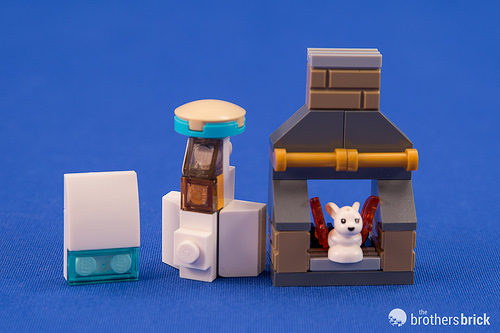 Chris: I think the Phantom looks rather good as a lamp. As to the rest, I’ve got nothing.

Edwinder: Indeed, roasted bunnies! Is the Ghost trying to disguise itself as a lamp?

Luka: When the spaceship does better party tricks than your bunny, you might as well throw your pet in the incinerator.

Daniel: Sing with me, “Bunny buns toasting on an open fire…”