Welcome to Day 2 of our LEGO Advent Calendar countdown. Each day, we’ll reveal the three mini-builds from the LEGO City, LEGO Star Wars, and LEGO Friends 2017 advent calendars along with commentary from our team. 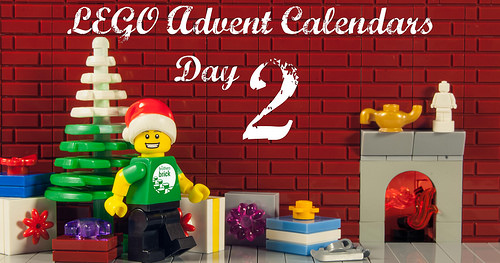 If you’re opening one (or more) of these advent calendars along with us, we’ve made sure the pictures and commentary on each day’s models will be behind a jump and posted in the evening every day, so we don’t accidentally ruin the surprise. The anticipation is killing us!

For Day 2, we have a bundled up snowboarder kid from City, a Sabine Wren minifigure from Star Wars Rebels, and a nifty snowmobile from Friends. 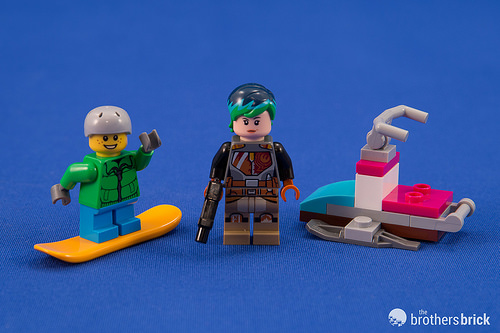 Chris: The two minifigures are nice. I always like more grey skate helmets because they may great greebling details. The snowmobile is simple, but effective. Now Stephanie will have something to putter about on.

Dave: My favorite usage of the bright light orange snowboard was as the McLaren P1’s spoiler. It is also nice to see a Mandalorian without a helmet for once (and a minifigure only available in last year’s Vader’s TIE Advanced). And finally, any excuse for three magenta jumpers is fine by me!

Elspeth: The bright light orange snowboard is a good accessory but the snowboarder minifig is not cool enough to be a boarder in that outfit. The snowmobile will be tough to control in a standing position so I expect to see some amazing minidoll wipe-outs! 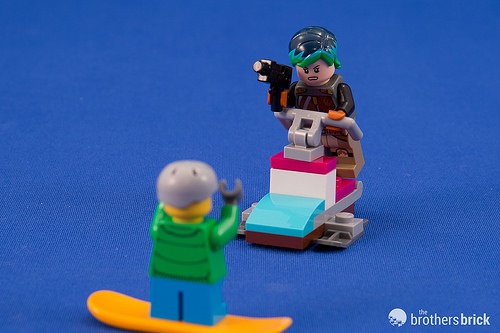 Chris: Whatever you do, don’t cross Sabine Wren. She’ll come after you, even if you’re just a kid on a snowboard.

Dave: No extra parts today! So sad. Though it is about time Star Wars embraced magenta and medium azure! Now all we need is a rainbow Star Destroyer.

Edwinder: Do not, I repeat do not move. The Imperials have resorted to using young apprentices disguised to infiltrate the Rebel camps. Young and cute, they win your hearts with their smiley and happy faces. Fortunately our lovely hero is ready and armed for any action with the Rebels latest Friendly ski bike. It’s been extremely dull having grey all the while, and finally the factories have come out with more color of choices.