This year’s season of LEGO shows in the UK saw a massive collaborative moonbase display, from some of the UK’s best-known and most talented builders. The model was absolutely enormous, 2.5m square, featuring a huge tower and multiple compartments. It was built with more than 50,000 bricks… 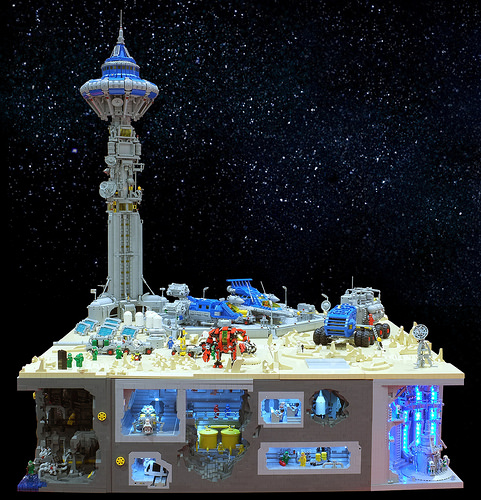 The moonbase plays host to an impressive collection of landing pads, with Neo-Classic spaceships and rovers of all shapes and sizes… 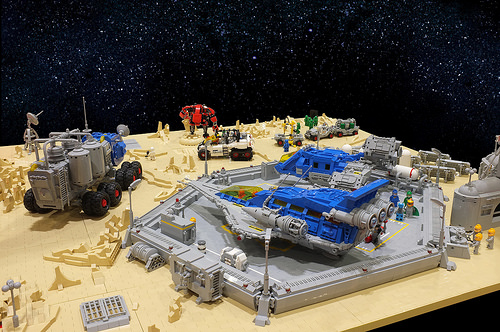 But below the lunar surface, there is even more action going on, with dozens of cutaway compartments and corridors, stuffed with lighting effects, motorised elements, and cool building techniques…

Brothers Brick caught up with Jason Briscoe, one of the collaboration’s organisers, to find out more…

The Brothers Brick: How long has this project been in the planning?

Jason: About a year. Like many things in life it sort of evolved. The initial conversations were between Jeremy Williams and I on our way back from the 2016 Skaerbaek fan weekend.

TBB: And what prompted you to take on such a monster build?

J: Most of the UK Spacers would tip our space helmets to the Bricks to the Past guys for the effort involved in, and the size of, their fabulous historic builds. Whilst it would have been amazing if we could have achieved something as grand as their huge layouts, size was always going to be an issue in terms of what we could realistically achieve. So in the initial planning (Oct 2016) we set some size guidelines that meant we would end up with around a 2.5m square.

Whilst a few of the guys wanted to go bigger, personally I’m glad we didn’t. One of they key issues was detail, detail detail… We really wanted to pack it in to the space. This was the main driver for the 360 degree viewing — visitors could tour round the model with the detail pulling them in. 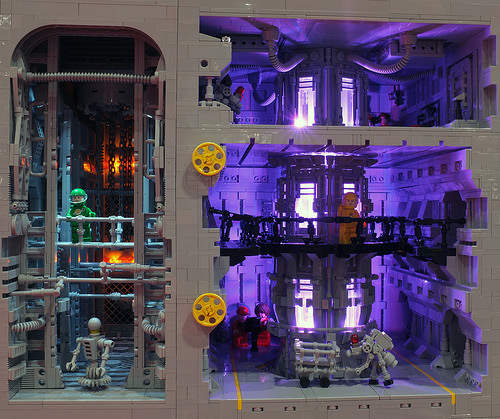 TBB: What are the particular challenges about this kind of large-scale collaborative build?

J: Commitment and delivery! Say to a bunch of builders that you’re thinking of a big collaborative build and everyone gets excited and throws ideas into the melting pot. But of all those that initially volunteer a few will drop out. Life gets in the way.

But too many drop outs = failure, so its important to get people to be realistic about what they can contribute and then pester them to deliver! We had a few issues along the way with this build, but the Force within the team was strong. Some changes along the way ensured no one was overstretched, culminating in a presentable MOC in the end.

The base was to be a feature model for the Fairy Bricks charity BRICKTASTIC event in Manchester, so everyone worked hard to deliver on time. Kev from Fairy Bricks is quite a character — nobody wanted to let him down (or face the wrath of the Hairy Fairy)!

TBB: How do you transport such an enormous creation?

J: The design was modular, using custom-made MDF boxes. Dimensions were back-engineered from stud lengths and heights. This allowed each corner and side to be transported separately and then assembled on site. The top surface and set dressing still takes some time to set up, but it worked out reasonably well. Sure we’d probably do some things a bit different if we were starting over, but transportation was simplified by the modular design of the sections.

TBB: You included a load of “play functions” that kids could activate, like opening doors or moving parts. How important was it to you that the model was interactive in this way?

J: This was really driven by Alec “play-feature” Hole. He does love a play feature! To be honest I wasn’t as keen on the idea at first, as it actively encourages kids to touch the model, and my inner design geek has palpitations with the yellow dials and levers maybe distracting from the otherwise neat and detailed cutaway sections.

However it has proved to be a great success. Kids have had a ball opening the airlocks and doors etc. We have had to supervise carefully, but overall there has been surprisingly little damage done.

TBB: What has the response been like at shows?

J: We have been overwhelmed by the comments, especially about the level of detail and the 360 viewing allowing people to see into the workings. It certainly proves that everyone’s efforts on the build have been worthwhile.

The model made it’s debut in Manchester for BRICKTASTIC, and we had Classic Space fans a-plenty, literally queuing up to see the model. Most visitors did the full tour and would comment on particular details they liked, and the kids absolutely loved the play features.

The genetics lab with the babies in incubators was one of the favourites, as was the small pod shuttles suggesting a sub-surface monorail system. Others liked the tall tower, and wide range of space vehicles. The lighting also proved popular — effects ranging from a plasma generator through to a starfield screen in the main control room. 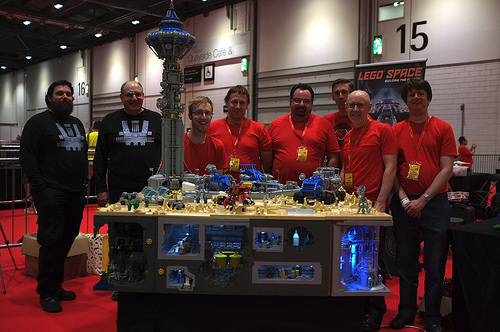 TBB: Where has it been on display so far, and what are the plans for the future? Will the layout continue to expand and evolve or are you guys done with it for now?

J: The layout has been exhibited in full at BRICKTASTIC in Manchester, Brick Live in London, and the Great Western Brick show in Swindon. Part of the display was taken to the Skaerbaek fan weekend, and most likely its final outing will be at the National Space Centre in Leicester in March 2018 — a fitting send-off really.

Due to its modular design, it’s had a unique set-up at each show, and at Skaerbaek, renowned builder Simon Liu contributed a small ship to the display. What with Miguel Rezhinio and Luigi Piori also making small contributions, it has turned out to be a bit of an International Space Station!

As for updates, we haven’t really discussed anything yet, but it’s possible some parts maybe retained and re-used. Watch this space!

TBB: It’s a fantastic model. Well done to everyone involved, and thanks for your time answering our questions.

5 comments on “LEGO Space builders take over the moon [Interview]”