There’s a whole medieval world created by LEGO fan builders as part of a role-playing game called Nine Kingdoms hosted by German-language site RogueBricks. Even RPGs need educational institutions and Markus Rollbühler has built the Royal Academy, a place for students to come and learn from the masters. There are lots of interesting LEGO techniques that we can also study at the Royal Academy with some fine LEGO construction and parts use on show. My eye was immediately drawn to the tree, with its foliage uniquely constructed using plumes of green feathers. I also love the bird’s nest sitting on the roof of the Academy, my ornithological knowledge is rather limited but it looks like a stork has made a home up there. 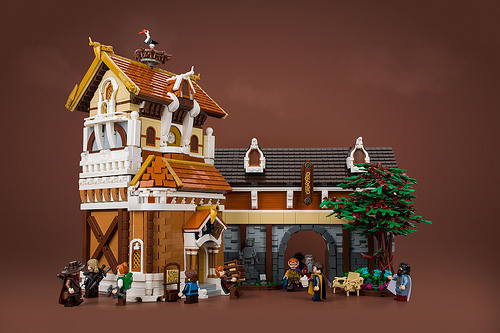 There are almost too many gems to mention, as the Academy itself has some lovely architectural details such as the beautifully shaped dormer windows. Can you spot the brown minifigure hockey sticks in the scene? There’s a lot to love in this creation and if you like this build, you will certainly enjoy spending a quiet summer evening at Markus’ windmill.