When you think it can’t get any worse, sometimes life likes to surprise you. Such is the case with this band of pirates as Dwalin Forkbeard tells us: The pirates have survived an unfortunate battle with an Imperial ship, only to be attacked by an ancient sea monster. They are doing everything they can to escape, going as far as blowing into the sail, but will that be enough? Judging by the skeleton on the animal’s back, they do not even have to be eaten to meet a tragic end. 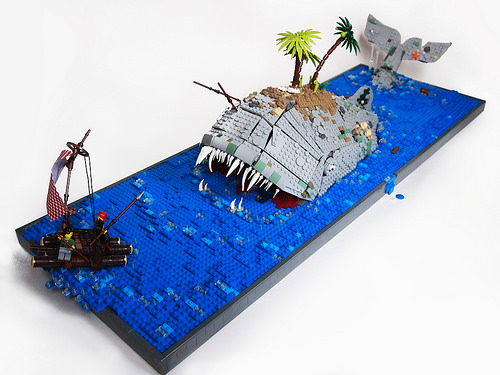 While the textures are somewhat simple, the inner construction of the creature has to be impressive to achieve the smooth, rounded shaping. The segment on the back resembling a small island is a common theme with sea monsters, but I have never seen it done in LEGO before, and a conservative amount of seashells and other sea animals spread across the monster really gives it a realistic impression. While the whale (or is it a fish? Is it any of that, even?) is obviously the focal point and the best part of the build, its surroundings help, too — the raft is positioned so that it gives a feeling of action and the water spilling off the diorama looks just so dynamic.