Of all modes of aerial transport, zeppelins are almost certainly the coolest (possibly because they are the least common). And while using one for raiding other aircraft may literally be the worst possible idea, that just adds to the fantasy. The sky pirates of The Travesty seem twice as crazy and intimidating for daring to raid aircraft in something as fragile as a zeppelin. The build is somewhat simple, using many large and specialized pieces, but Ted Andes manages to bring it all together quite well. 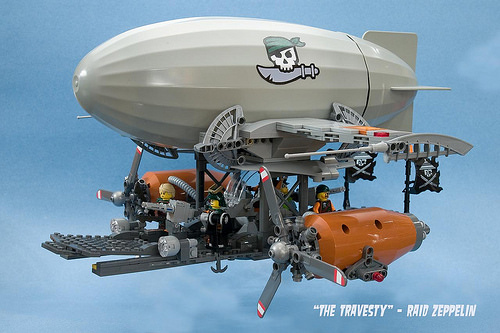 I may be biased by nostalgia for the Adventurers zeppelin piece, but I am sure the creation has something to offer for almost everybody. The deck looks like it was just slapped together and hardly supports the clutter it carries, which is exactly what one would expect from pirates. The light use of stickers breathes just that little extra life into the creation to make it quite memorable and recognizable.

4 comments on “Plunder the skies in your raid zeppelin”