Additionally, all other LEGO Dimensions sets aside from starter packs are now 50% off or more at LEGO Shop@Home, including the Goonies and Mission Impossible Level Packs, Hermione, Excalibur Batman, Knight Rider and LEGO City Fun Packs, as well as the LEGO Batman Movie and Ghostbusters Story Packs.

So without further adieu, let’s take a look at LEGO Dimensions Wave 9. 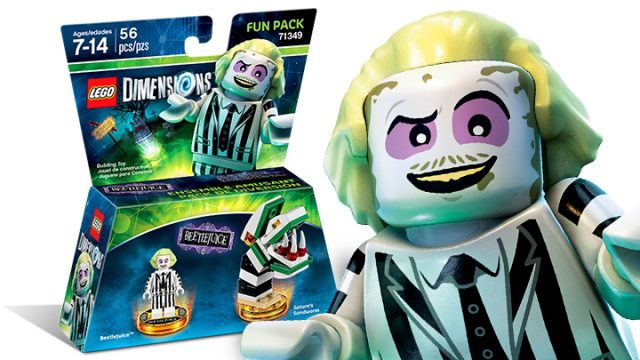 Just in time for Halloween, the Beetlejuice Fun Pack continues LEGO Dimensions’ love of 80s nostalgia (which is likely why LEGO Dimensions Year 2 hasn’t sold as well with younger players). The singular minifigure is the spitting image of his on-screen counterpart and endowed with so many powers that you might get the impression that LEGO wants you to finally complete the game. The Beetlejuice Adventure World is one of the most interesting yet, which compensates for the somewhat underwhelming “vehicle,” so say his name three times and let the fun begin. 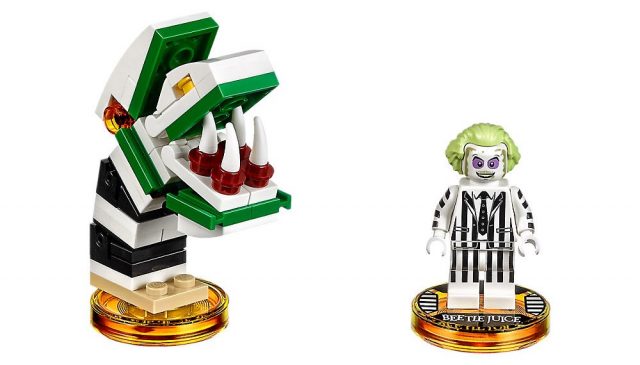 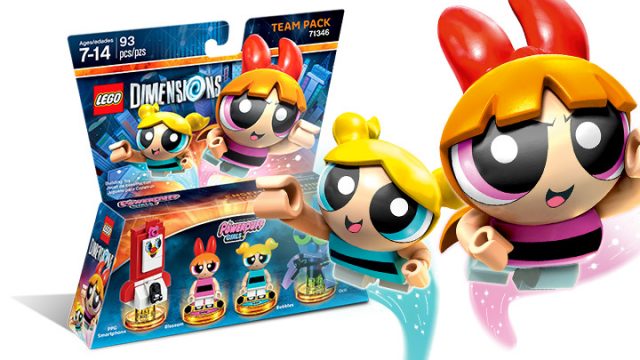 Two-thirds of the Powerpuff Girls come to life bringing their never-ending optimism to LEGO Dimensions (a shot of positivity the game certainly needs). Blossom and Bubbles are included with what appear to be the biggest molded minifigure heads ever. The minifgures are based on the current Powerpuff Girls reboot on Cartoon Network (and they have hands for the first time ever!). The two vehicles are incredibly simple and not too inspiring of builds, though they do include two new prints.

In the game, the characters are incredibly overpowered including flight, heat vision, rainbow powers, as well as the elusive “lantern” abilities (now termed LEGO constructs) formerly only granted to hard-to-find Supergirl who was only given away at Comic-con and in certain PS4 starter packs. Bubbles also has Parseltongue as well as Atlantis abilities formerly granted to only Aquaman. They were originally rumored to have their own level, though a fully fleshed out Adventure World of Townsville is better than nothing. 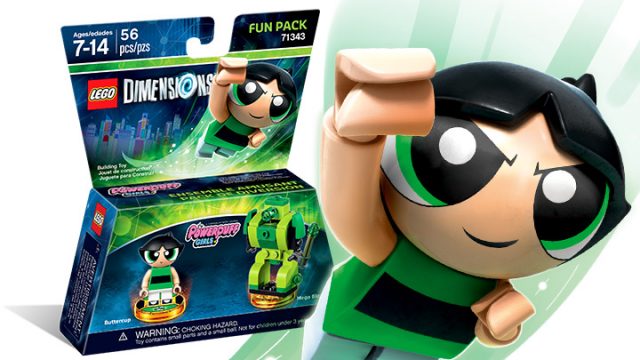 Rounding out the infamous trio, Buttercup completes the Powerpuff Girls lineup (though the cartoon announced the addition of a FOURTH Powerpuff Girl in the coming week). The tomboy of the group, Buttercup has similar powers to her sisters including Spinjitzu as well. With all three Powerpuff Girls, one could easily beat most all of LEGO Dimensions. On the other hand, her Mega Blast Bot vehicle is sadly nothing more than uninspired table scraps. 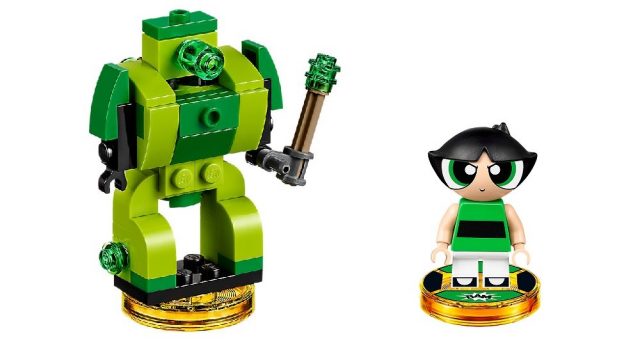 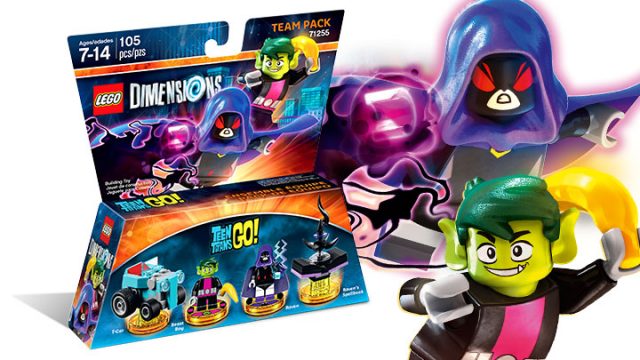 Bringing in another Cartoon Network property into the LEGO Dimensions fold, Teen Titans Go! also gets the double-pack treatment with Raven and Beast Boy minifigures. The original voice actors reprise their roles and the show creators even created a special mini-episode of the show accessible through the game. Either Teen Titan Go! pack unlocks their Adventure World which feels slightly more robust than previous worlds.

Raven, a character who combines light and dark in one, has one of the last exclusive powers opening “Raven Portals” if you ever want to 100% the game. She can also create LEGO constructs, use magic, fly, shoot lasers, create electricity, and is an “intelligent” character. Her minifigure is pretty faithful to her cartoon form, and fun fact, she is the only Teen Titan that hasn’t had a physical minifigure before this game. Her mini-build is her spell book and quite well executed.

Beast Boy, on the other hand, has had only one minifigure iteration before in the 76035 DC Comics  Jokerland set from 2015. In the game, Beast Boy uses a banana as a boomerang and can transform into a variety of animals each with their special ability. Unlike Jake from the Adventure Time Team Pack, Beast Boy does not have a big fig variant in the game (which I think is a huge missed opportunity). His minifigure conveys the humorous roles he typically finds himself in, and his vehicle is a smart T-car, reminiscent of the current Mighty Micros line.

One added bonus with either Teen Titan Go! packs, Cyborg from the DC Comics Fun Pack, and Robin from The LEGO Batman Movie Story Pack, will both transform into their cartoon variants in the Teen Titans Go! Adventure World, completing the under-aged superhero squad. 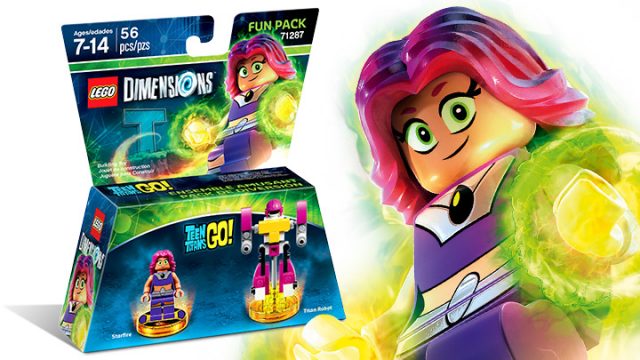 Completing the Teen Titans, Starfire is the last overpowered character to be added to LEGO Dimensions. The former princess is only one of three characters with rainbow abilities, can also use Atlantis elementals, speak Parseltongue as well as fly and shoot lasers. Her mini-build is the Titan Robot, echoing the same magenta colors as her hair. She has also only had one minifugure iteration before, in the same 76035 Jokerland set as Beast Boy. 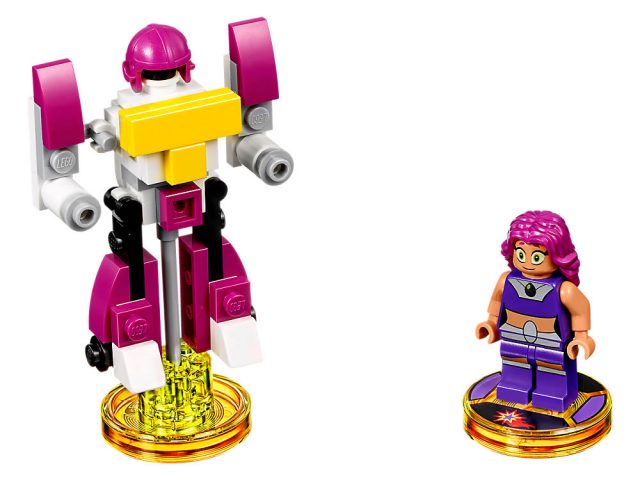 That wraps up Wave 9 of LEGO Dimensions (and likely the entire game). Check out the trailer below to see the gameplay and all of these new characters interacting.