Sometimes, history is quite literally the foundation of the present. This creation is one such example, but with an interesting duality: not only does it represent medieval structures built upon ancient ruins, but it is also literally a rebuild of Antonio Carretti‘s earlier LEGO Forum of Nerva, which we also featured here on The Brothers Brick. The creations very obviously represant the same structure, despite the contrast between a shiny new temple and fortified ruins. 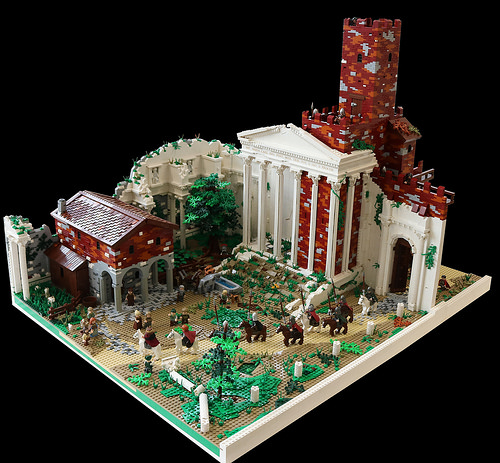 The dark red and orange tower blends with the remains of the temple beautifully, and the white details in the house on the left really show how the stairs of the temple were used to build it. My favourite part is definetely the overgrown and decrepit temple itself, with its former glory hardly recognizable anymore, replaced with an impression of great age and a long and tragic history.