As his final entry for a building contest run by German fan site Imperium Der Steine, builder Ben Tritschler has crafted something extraordinary: a working Rogue One themed pinball machine! It features elements from many scenes in the movie, such as Jedha, Darth Vader’s castle on Mustafar,
the Battle of Scarif and the final Star Destroyer “ballet”. 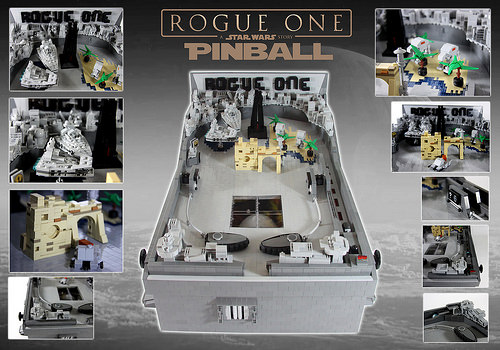 In some ways the choice of a pinball machine makes perfect sense; these were everywhere right before the original Star Wars movie A New Hope came out (since video games were still relatively new back then) and Rogue One takes place shortly before the events of A New Hope.

Ben demonstrates the play features of his machine in the video above. With it’s working plunger and flippers, this thing looks like more fun than bulls-eyeing womp rats in a T-16 (whoops, wrong movie). Just keep your fingers moving, or the balls will be slipping past you faster than star systems through Tarkin’s fingers (ok, I’ll stop now).