This year, the LEGO Technic theme celebrates a remarkable date — 40 years since the first Technic sets hit the store shelves in 1977. To mark that occasion, LEGO prepared a couple of surprises for the theme’s fans: a commemorative 1×3 white Technic beam with “40 1977-2017” print included in every set released in 2017, plus something truly touching — a remake of the legendary 8860 Car Chassis set from 1980. 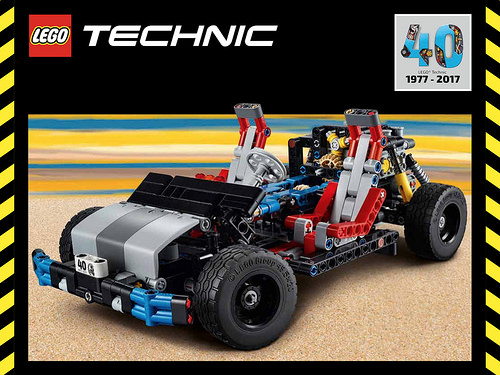 After the instruction booklet became available online earlier this week, every LEGO fan can build his or her own modern copy of the iconic set using pieces from three 2017 Technic sets — 42057 Ultralight Helicopter, 42061 Telehandler and 42063 BMW R 1200 GS Adventure. The total price of these sets is about $120 USD/95€ for which you will get 4 vehicles at once. At the same time, those with a vast collection of Technic pieces will be able to build their own copy of the classic chassis without getting any new sets, although it would be quite a challenge to get all the pieces in correct colors. The chassis consist of 572 pieces, which sets the model right behind the 42063 BMW R 1200 GS Adventure in this year’s line-up with a price tag of approximately $50 USD/45€.

I had never thought I would start the description of the set with a sentence like this, but the model comes in about 20 bags distributed between 3 different-sized boxes — of course, that’s if you’re grabbing three of the said Technic sets from a store. As mentioned before, the build consists of 572 pieces, leaving 530 pieces unused. No stickers are required, but don’t worry if you have applied any of them before: pieces with stickers are either not used or placed in the way that no stickers are exposed or ruin the car’s exterior. 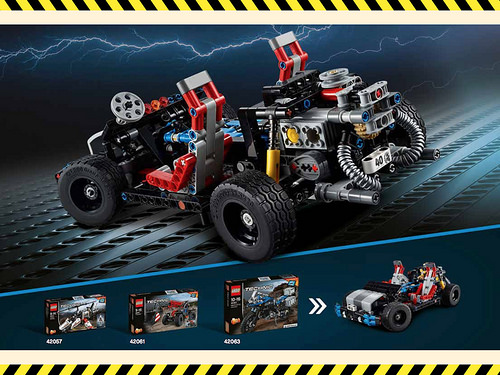 The build starts with the rear, where the drive axles are placed. About ten minutes into the building process you’ll find yourself holding a neat bundle of beams with an engine attached. Nothing functions at the moment, yet most of the gears will be used in the next several steps. 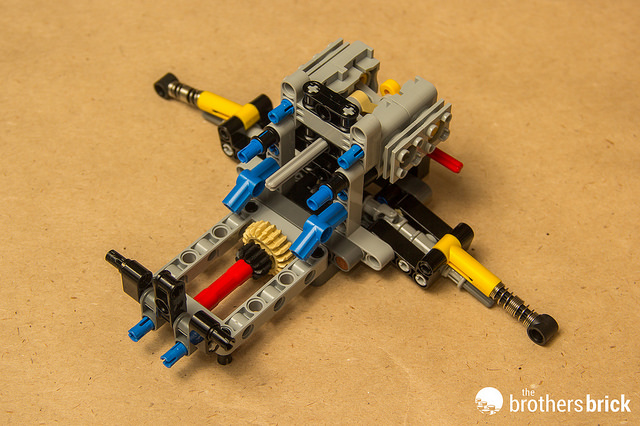 A bit later the simplest gearbox takes its place. All in all, you’ll need 6 gears of two of the most common types to be able to switch between three speeds. Personally, I have never built LEGO Technic gear boxes in my whole life, so this little baby got me as excited as a 10-year-old boy exploring electric motors or pneumatic systems. 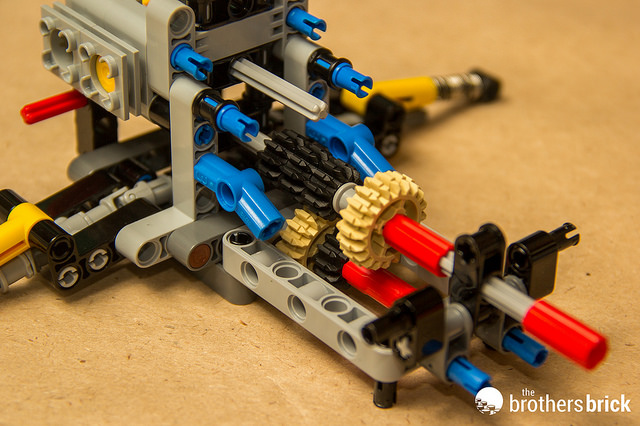 During the next several steps the gear box gets covered with beams, while the rear of the chassis is being decorated is a nicely devised way. Each of the sets required by the model contains one white anniversary beam, and it was especially pleasant to find out that all three are used in the building process. The first one acts as a rear plate number. 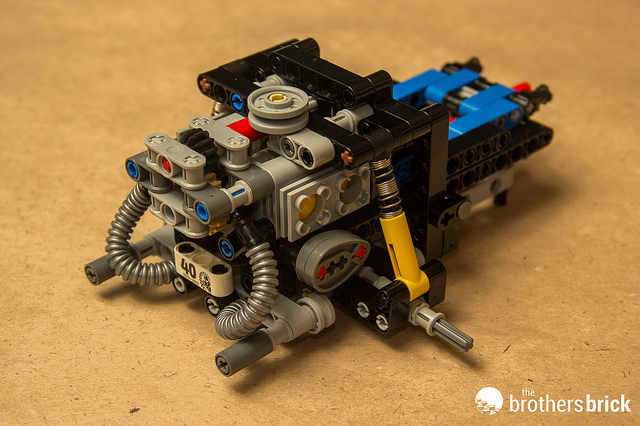 The next part of the chassis contains the gear stick. Its three positions match with three available modes: neutral, first gear and second gear. Thanks to an asymmetrical structure, the stick can be securely locked in each gear with no risk of shifting during play. In addition, a a Technic axle connector hub with 3 axles is placed above the engine right behind an exposed tan 20-tooth double-bevel gear which imitates a cooling fan and rotated as you drive the car back and forth; a simple but nice touch. 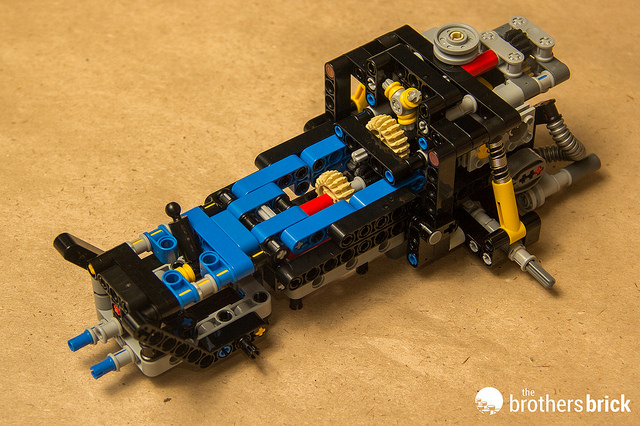 The front axles go next, and, to be honest, I expected the chassis to be much shorter and smaller. The overall length of the model is 11 inches (28.5 cm) long, as its scale is significantly larger than most other Technic models. 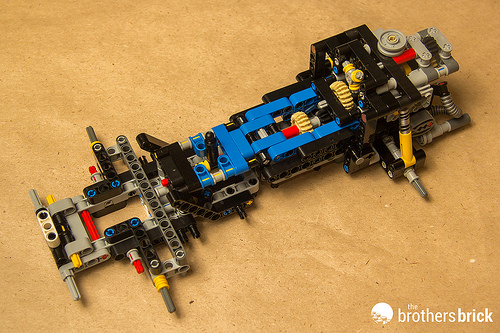 It took me about an hour and a half of building time to finish the chassis. The result isn’t something you find in regular LEGO Technic sets. First, several minutes of driving the car on a table is a must. 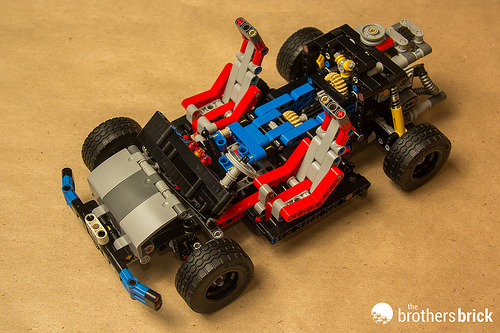 A top front view gives a great opportunity to examine the model. By the way, can you spot the difference between the seats? Both seats should include a couple of red bent Technic liftarms 1 x 7 (4-4), but there are only three of them available, solely in the 42061 Telehandler set. I must admit I nearly had a little heart attack as I finished the first seat and discovered that there was only one liftarm left. Still, the way the designers dealt with the problem is brilliant, and I love the passenger’s seat even more than the driver’s one. 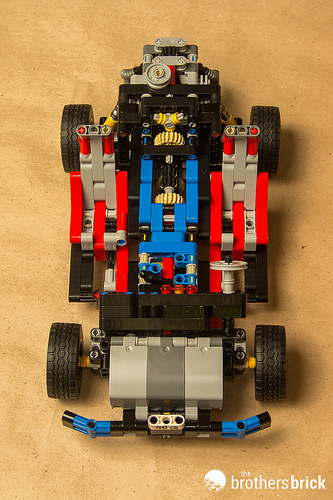 Unlike the front part, the back of the car is much more exposed — and I love it. Smooth beams and panels are great, but all the axles and pins seen through the car’s joints are simply alluring. 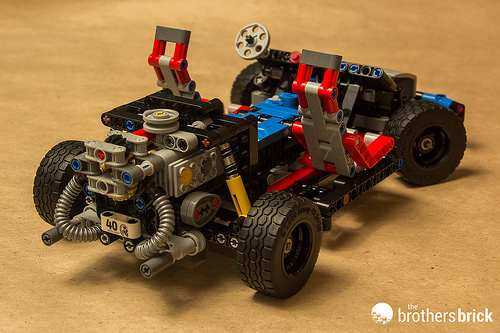 As the chassis isn’t that heavy, the suspension is nearly of no use. Once again, it’s a great illustration of how the system works, but to a certain degree. 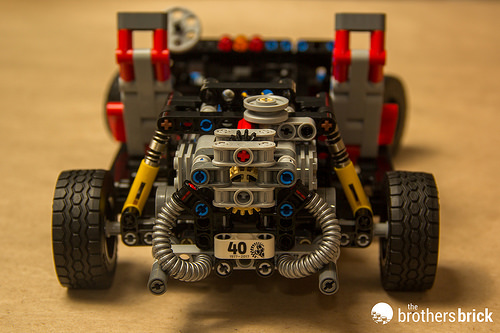 One of the least expected features of the model is the ability to change the distance between the seats and the dash panel. Both seats can be moved back and forth along an axle beneath, and in the picture below you can compare both end positions. To my great embarrassment, I had no idea that not only did the seats of the original 8860 set slide along axles in the same way but also were adjustable and could recline as well. 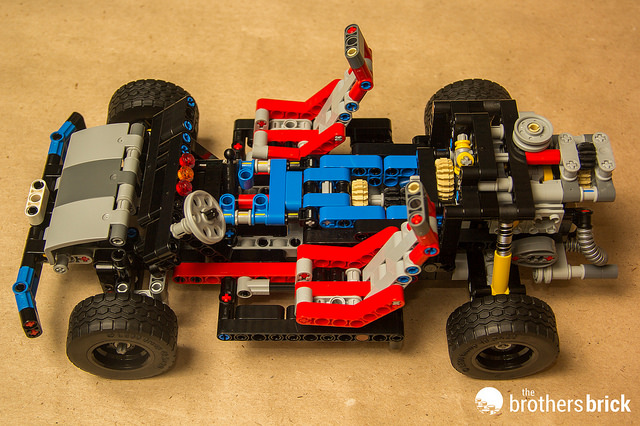 The dash panel is as simple as it can be with only three transparent colored 1×1 round plates which are supposed to be either buttons or displays. 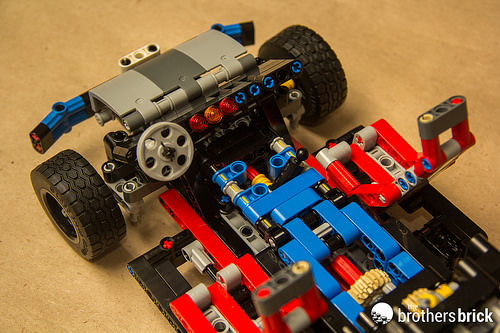 I love how appropriate the gear stick looks in the finished model. It’s not too big, not too small, and I can clearly see a driver being able to easily operate it sitting in the seat. At the same time, the stick is extremely convenient to use during play. 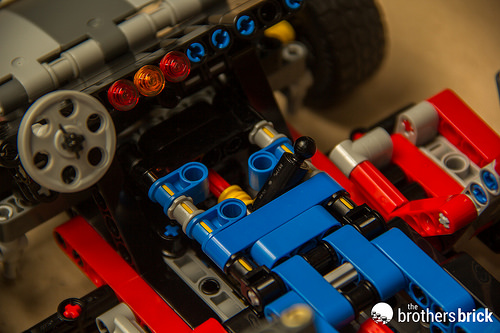 The front panels and the bumper have a lot in common with the 8860 car. Here’s the second 1×3 anniversary beam placed as the front number plate. 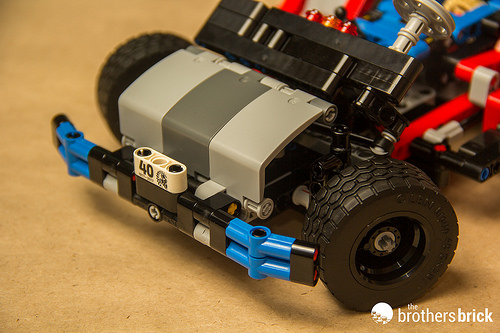 Below the chassis, there are several beams and frames that make the whole structure very, very robust and durable. Also, here’s the third anniversary beam hidden between the front wheels. 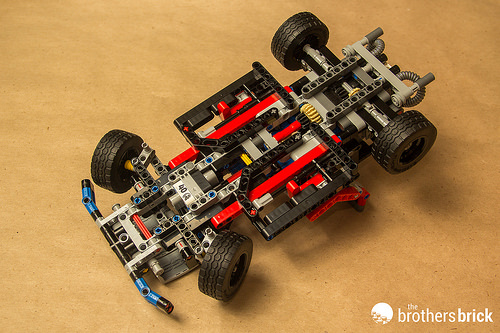 Once you’ve had enough of playing with the chassis all over the house, you start thinking about possible improvements of the build’s design. And there is plenty of room for any sort of upgrade or customization. The model isn’t just great study material, but also a perfect base for your own creations. Many of the unused parts can be used to change the car’s exterior: you can even attach a telescopic boom between the seats or replace the front bumper with a scoop. 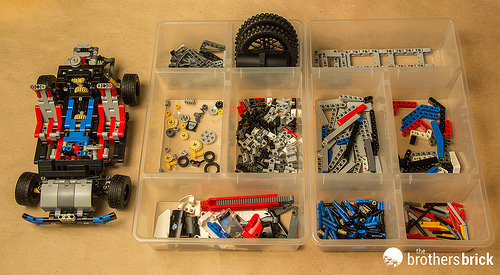 As for now, I’m pretty happy with an alternative steering wheel. In my opinion, a pilot’s yoke looks much better. 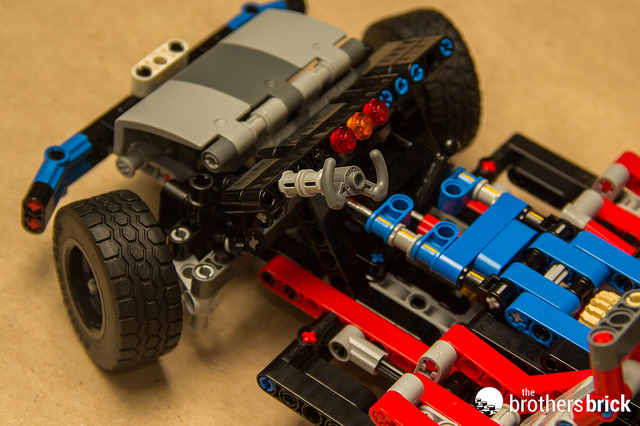 The LEGO Technic 40th anniversary car chassis is a modern build assembled from modern pieces, yet it has so little in common with modern sets. Don’t expect any “cool” building techniques or peculiar mechanisms. The idea behind the model is a simple rear-wheel-driven chassis with a four-cylinder engine, featuring three-speed transmission, rear-wheel independent suspension, and a functioning steering system. Like its ancestor, the 8860 set from 1977, this car is a beautiful illustration of the vehicle’s main mounts and feels like it was built 40 years ago. And I’m sure it will be of great interest for many young builders who had no chance to learn about some of the best LEGO Technic chassis of the past.