We loved what we saw when we got our first look at LEGO’s new BrickHeadz theme, but how do they stack up in the brick? The LEGO BrickHeadz will be available to LEGO VIP-card holders in LEGO stores and the LEGO Shop Online beginning Feb. 15, and they’ll retail for $9.99 USD each.

We’ve got our hands on all 10 of the characters that LEGO has announced so far, and we’re keen to show you what we think. We’re starting off with a look at the four DC characters, all from The LEGO Batman Movie. (Read our review of the movie here.) 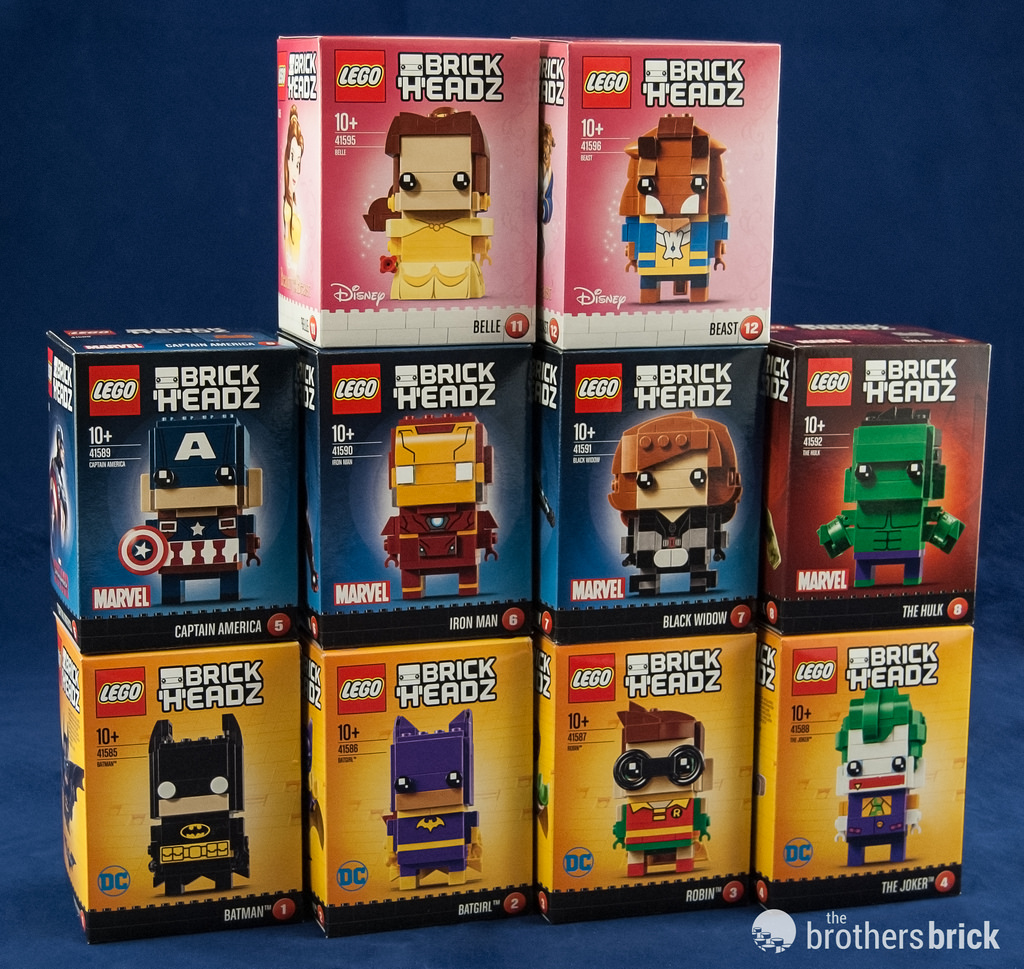 The boxes all have a number in the lower right corner, showing their place in Series 1—the first of many series, no doubt, considering these are likely to inspire gotta-have-em-all madness like the Funko Pop! vinyl figures they compete against and seem to be partially inspired by. The DC characters are numbers 1-4 in Series 1.

Though the LEGO BrickHeadz characters are in some ways stylistically similar to the Funko Pop! characters, their hilariously chibi-ized style with a giant blocky head and short stubby limbs is also a product of the LEGO fan community. LEGO fan Austin Carlson created a series of “Block Heads” in 2014, and Austin was later hired by LEGO. This line is the fruit of his employment. 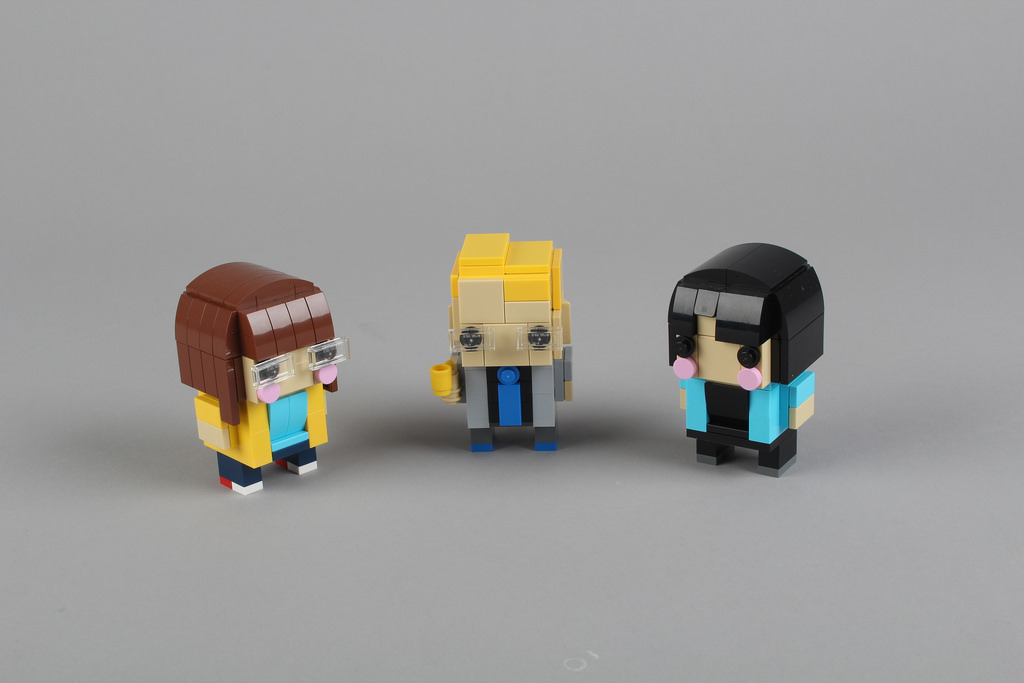 The sides of the BrickHeadz boxes show stylized minifigure versions of the characters.

The back of each box gives a good shot in the individual characters and shows the other characters in the license. 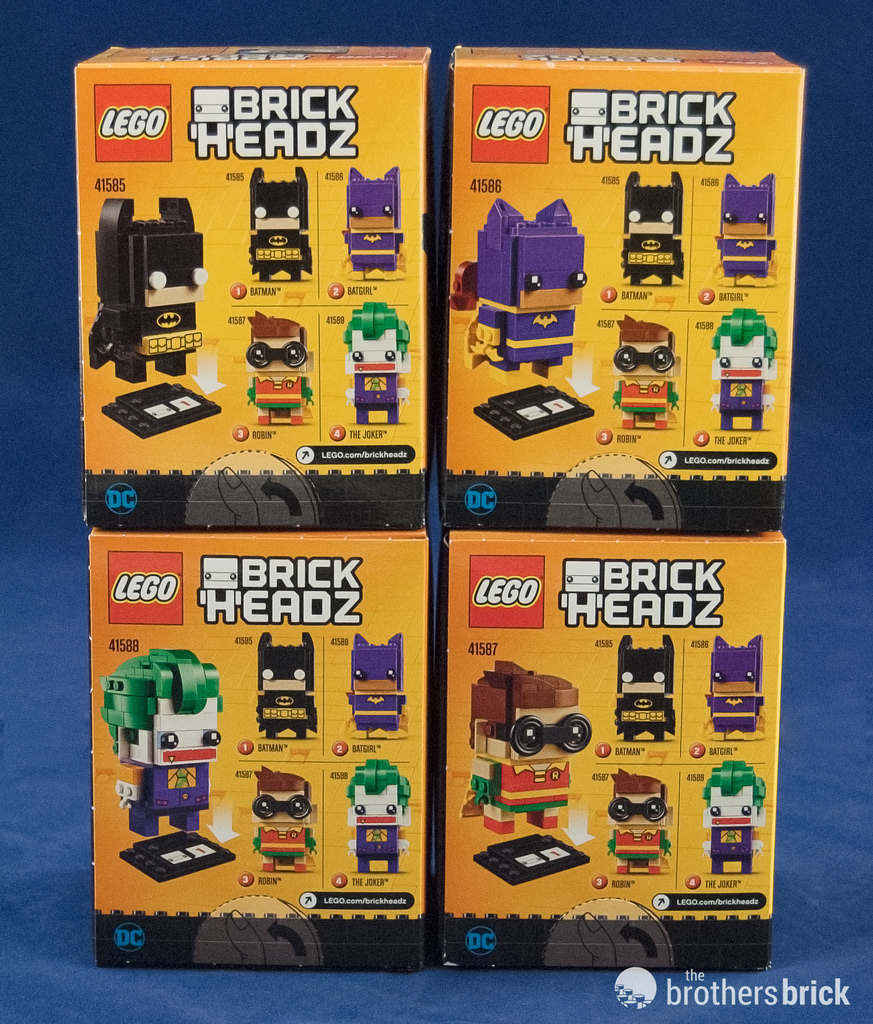 Let’s start off with Batman, Gotham’s favorite dark hero, though you may have a hard time taking this cute guy as seriously as he’d wish. 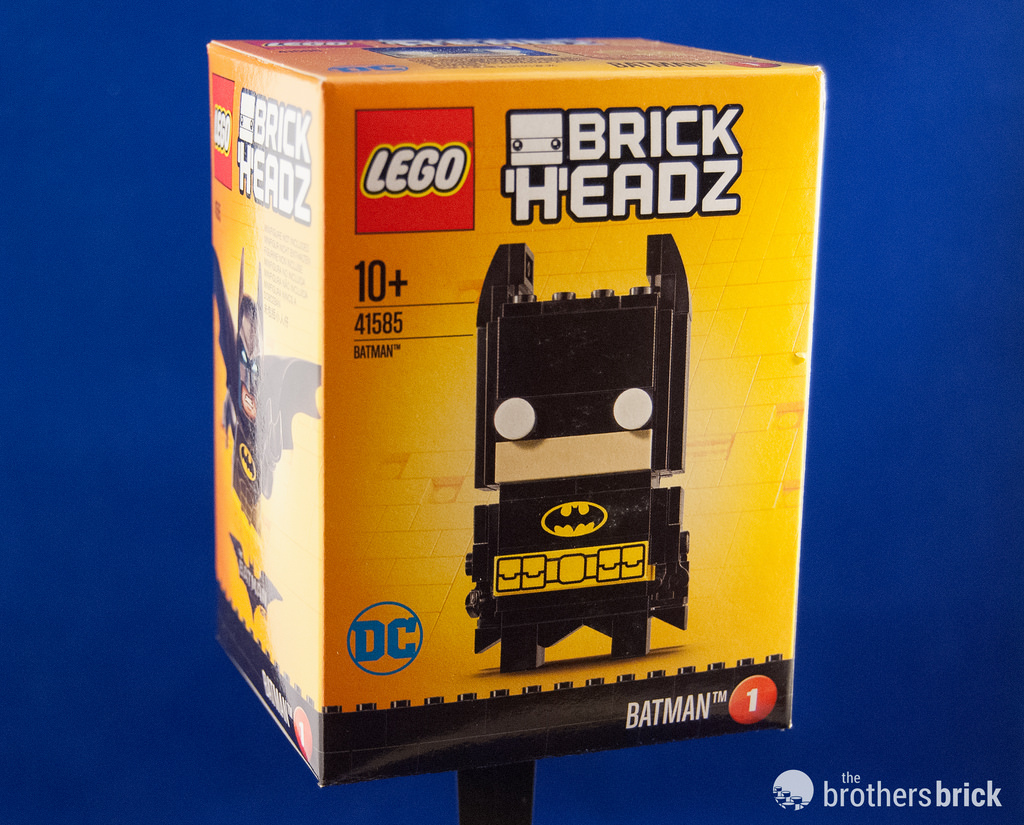 The boxes are thin cardboard, and the tab for opening them is on the bottom flap. Inside each box are two bags, a 4×6 black plate for the base, and the folded instruction manual. His 91 pieces are the fewest of the DC characters, and only Captain America has fewer of the as-yet-announced characters. 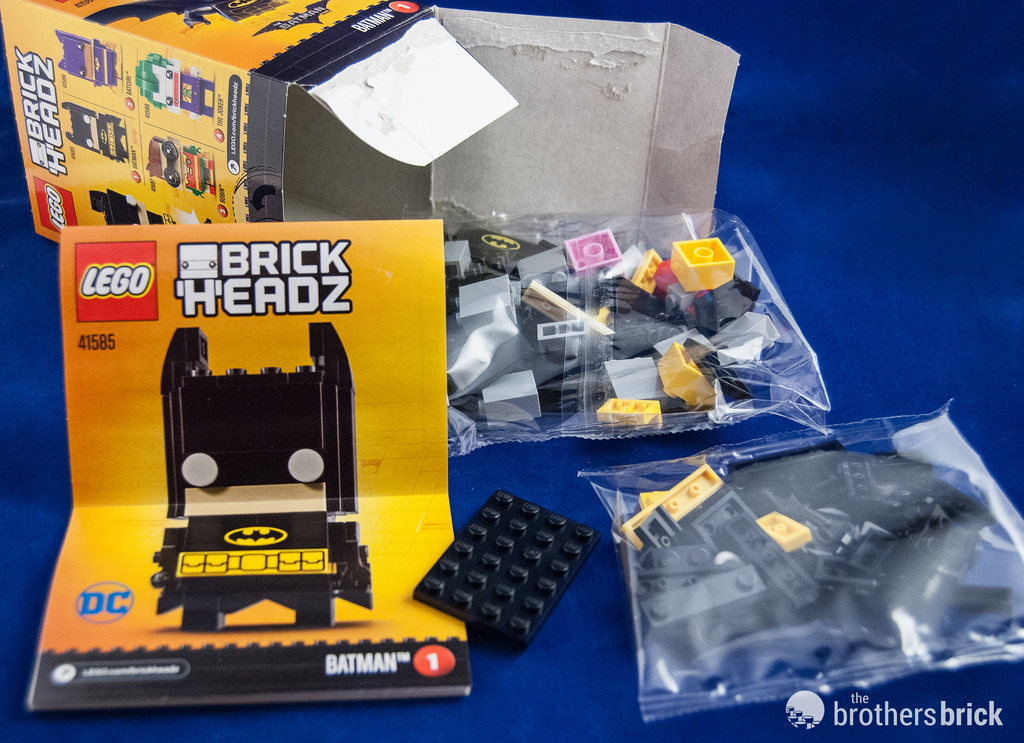 If you’re a fan of SNOT bricks, you’ll love these sets. Each BrickHeadz employs a full 14 light grey Brick 1X2X1 2/3 W/4 Knobs (Part 22885). Some, like Batman, have even more SNOT bricks of different styles.

All of the decorated bricks are printed, including the shared BrickHeadz Series 1 black 2×4 tile. Batman gets two unique elements: a black 1×4 brick with the classic Bat logo, and a yellow 1×4 tile printed with the utility belt details. 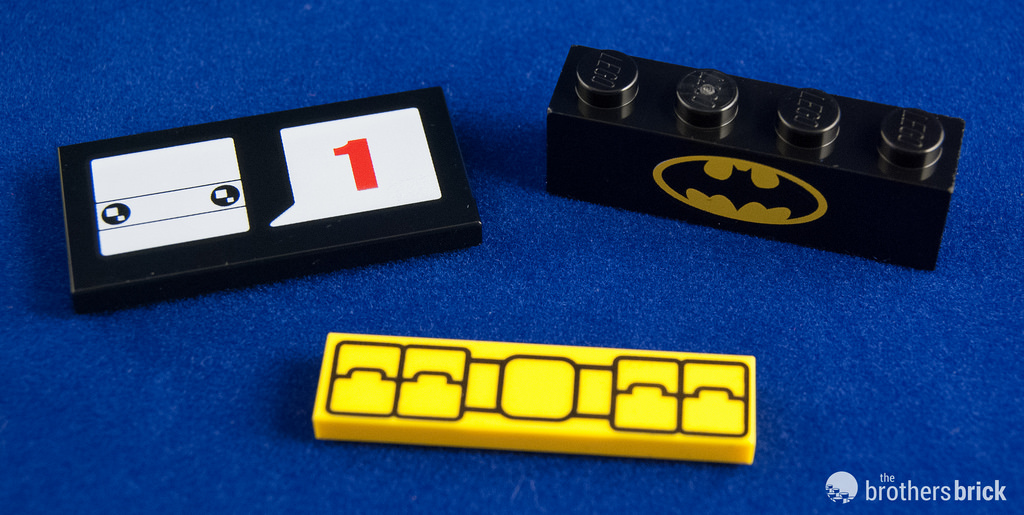 The base of all the figures are the same, and consist of four elements. The 1×4 tile with 2 studs means each BrickHeadz character attaches with just 2 studs. 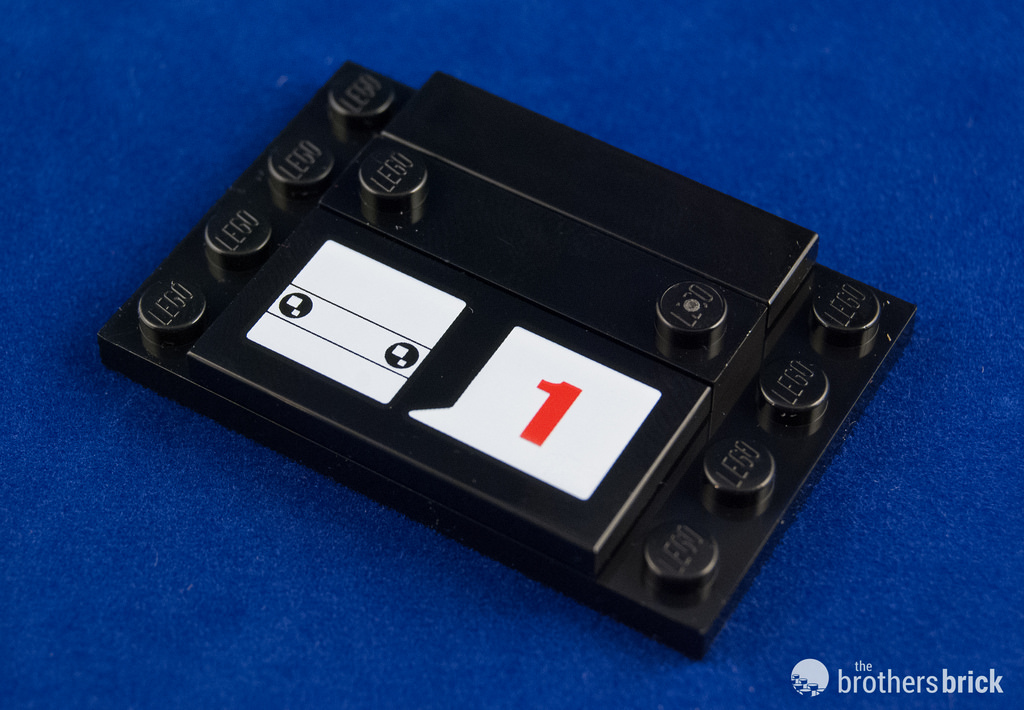 Inside each character’s head is a pink 2×2 brick “brain,” surrounded by 12 of the SNOT bricks. 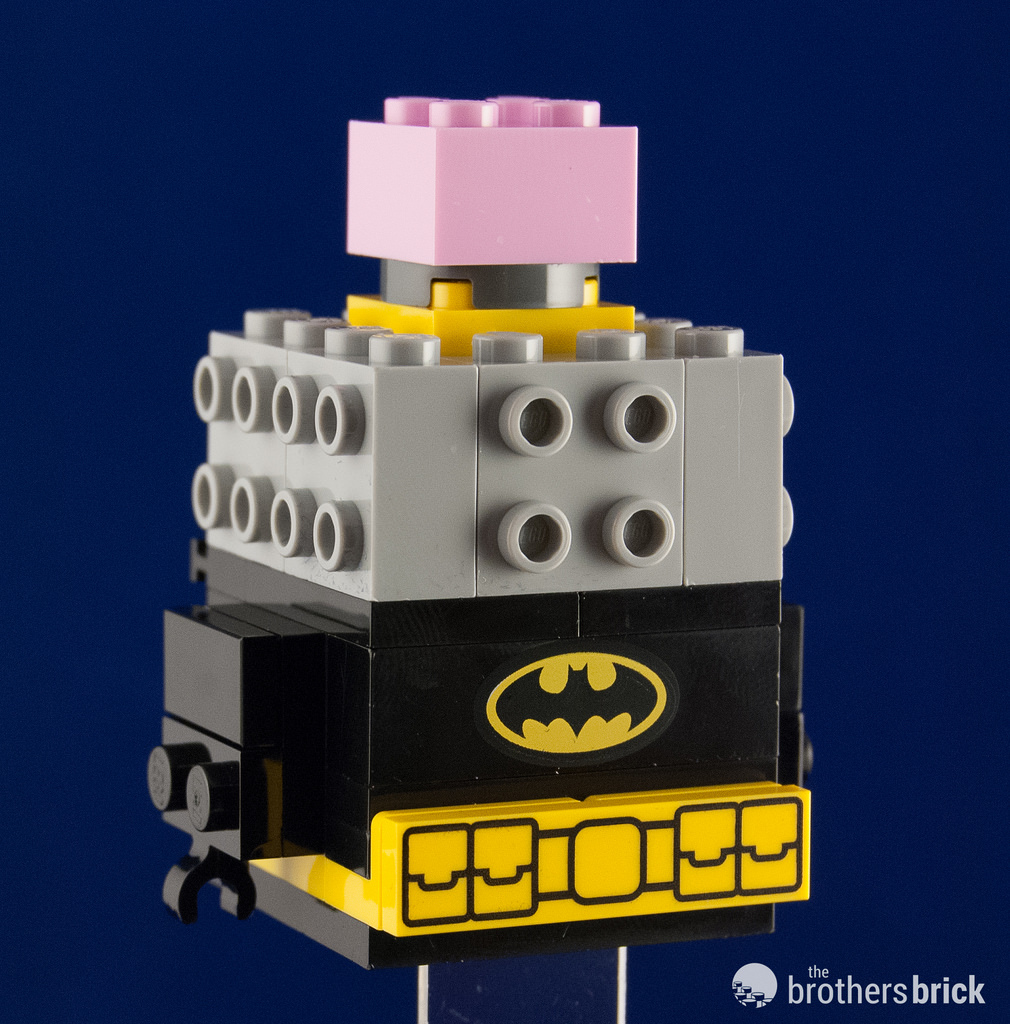 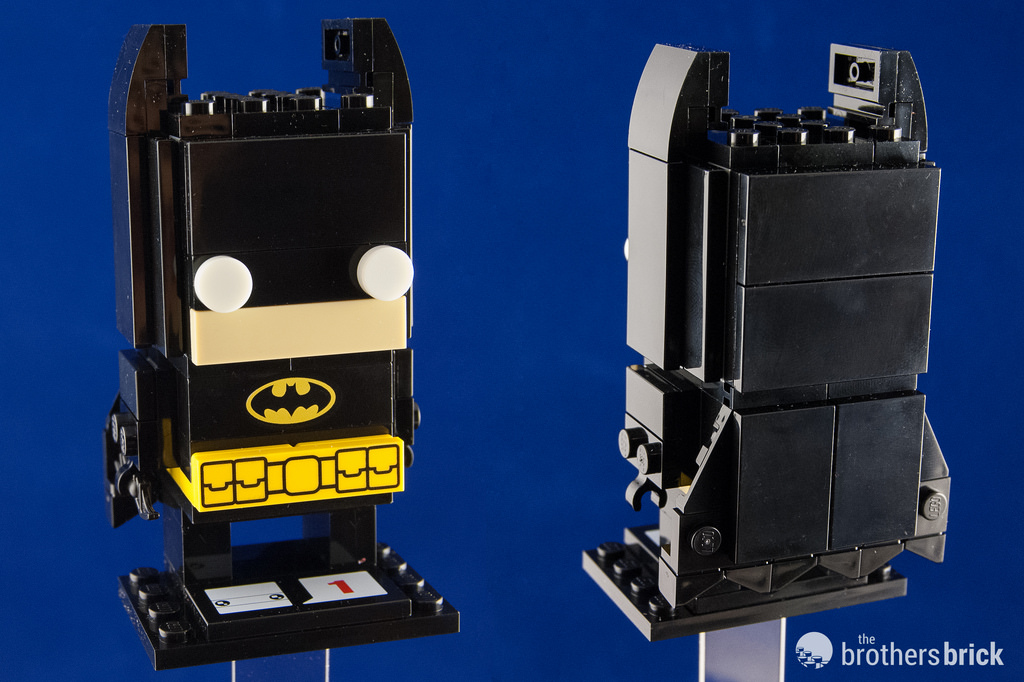 Here’s the BrickHeadz Batman next to his minifigure self. They’re both thinking dark thoughts. 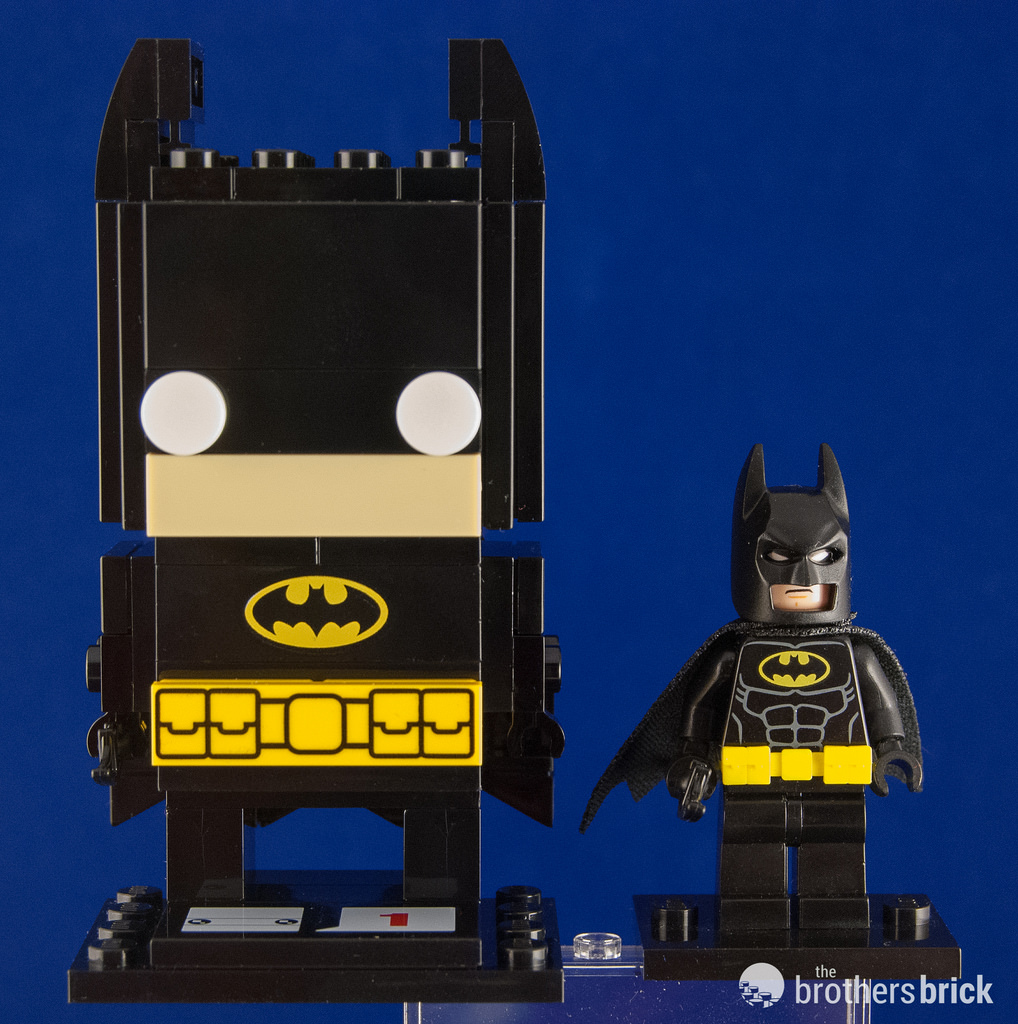 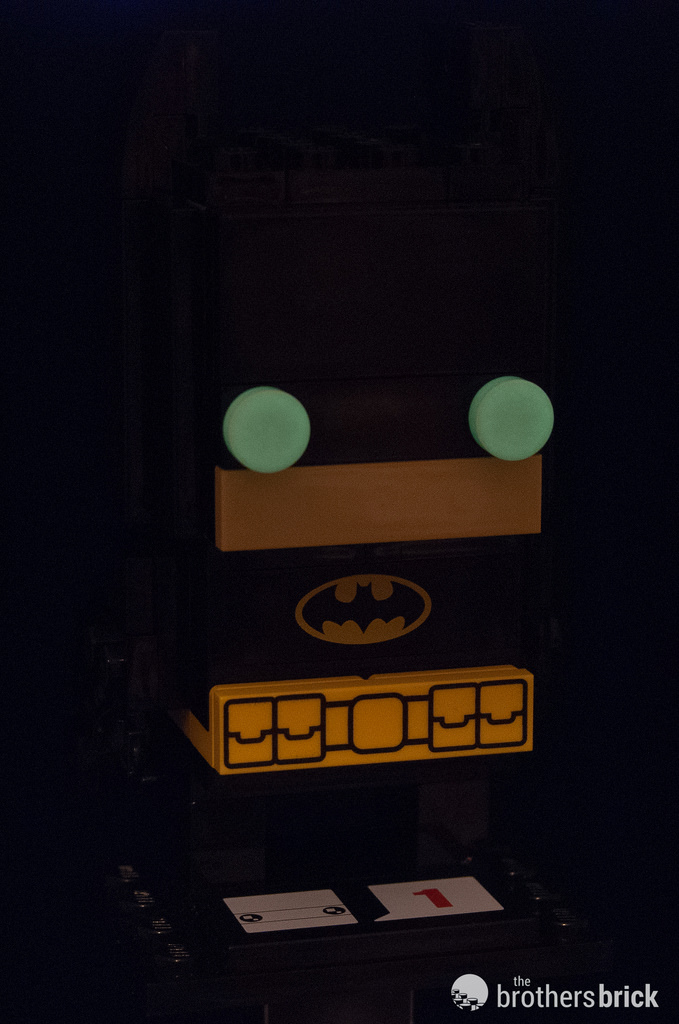 In her cool purple batsuit, Batgirl gives us a variety of newly recolored elements. 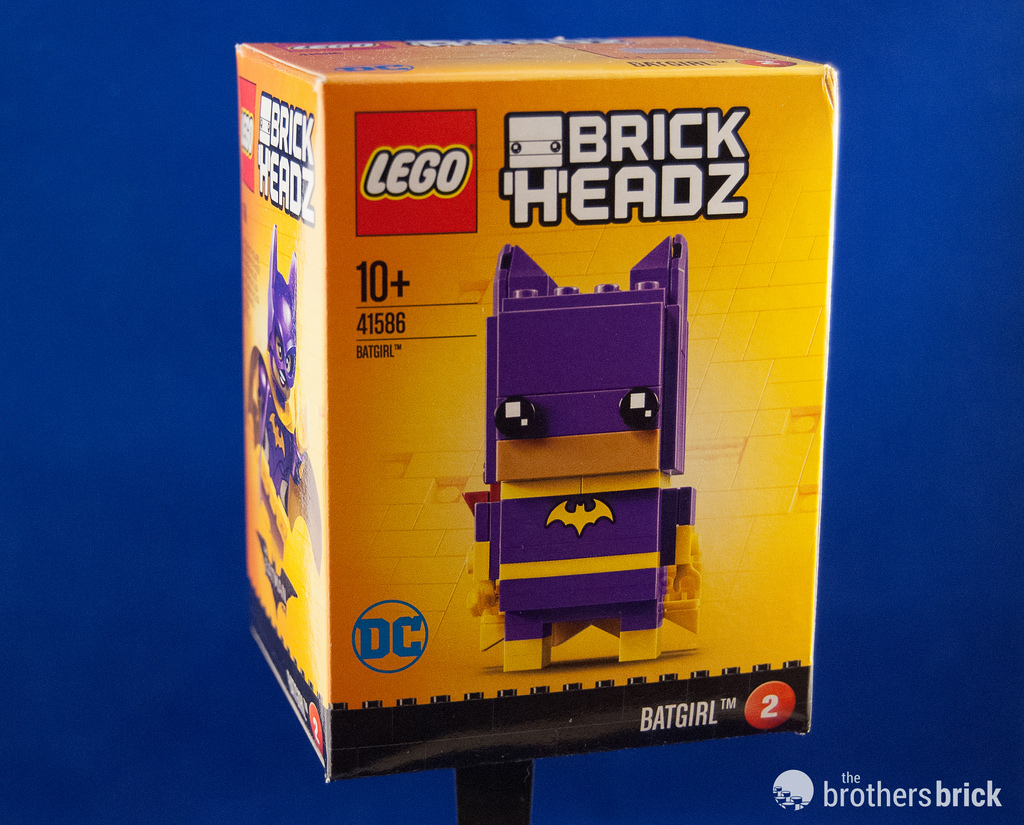 The only exclusive printed element is the 1×4 purple brick with the yellow bat logo. All of the figures except Batman use the printed black 1×1 round tiles for eyes, and an extra is included in each set.

Here’s the basic structure for a Brickheadz, before any of the unique facial and hair detailing is applied. You’re essentially building a giant SNOT cube with plenty of studs on all sides. 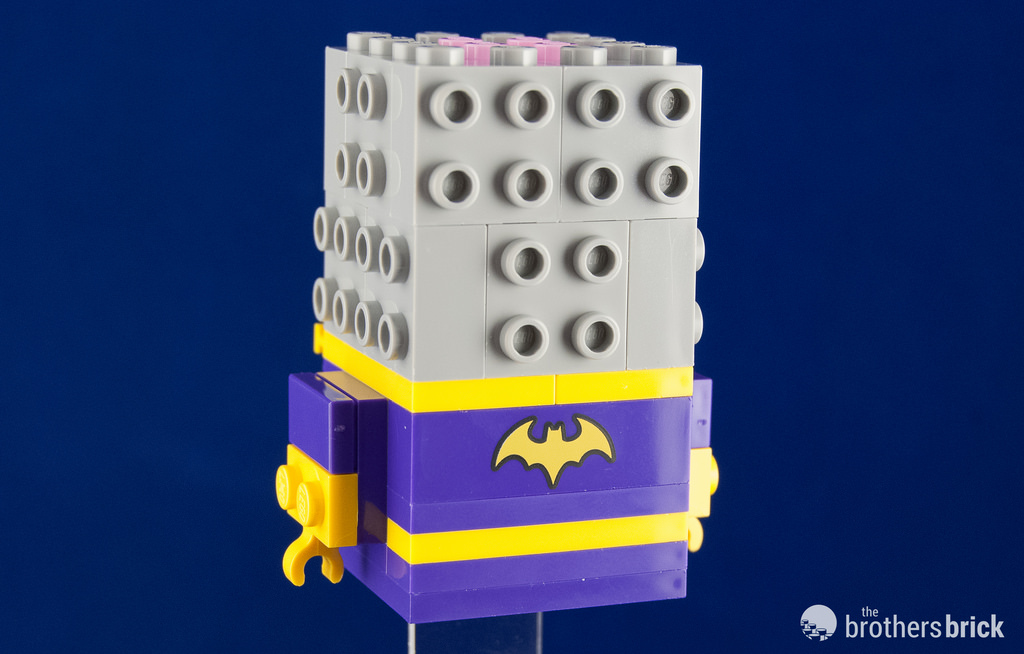 Purple shield tiles help form Batgirl’s ears, and the head is smoothed out with purple 2×3 and 2×4 tiles. In back, her dark red ponytail is deftly shaped thanks to a Plate 2X2X2/3 W/2 Horizontal Knobs (Part 99206), which is appearing in dark red for the first time. The yellow cape is the same design as Batman’s, and employs a pair of yellow 2×3 tiles. 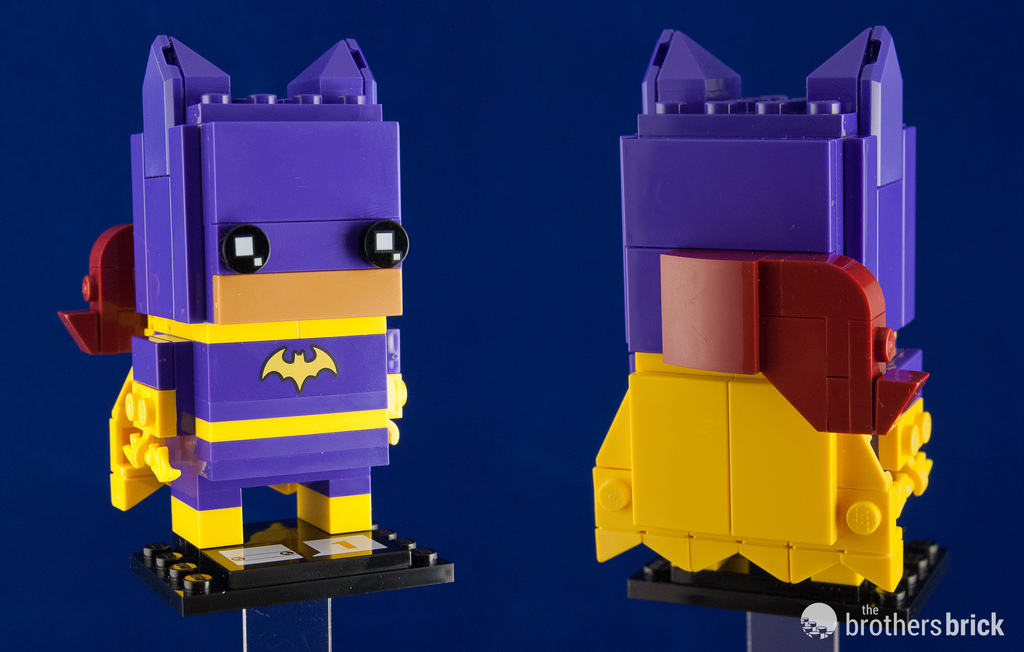 Batgirl gets a 1×4 tile of Medium Nougat to match her minifigure’s skin color, and she’s outfitted with a yellow Batarang. 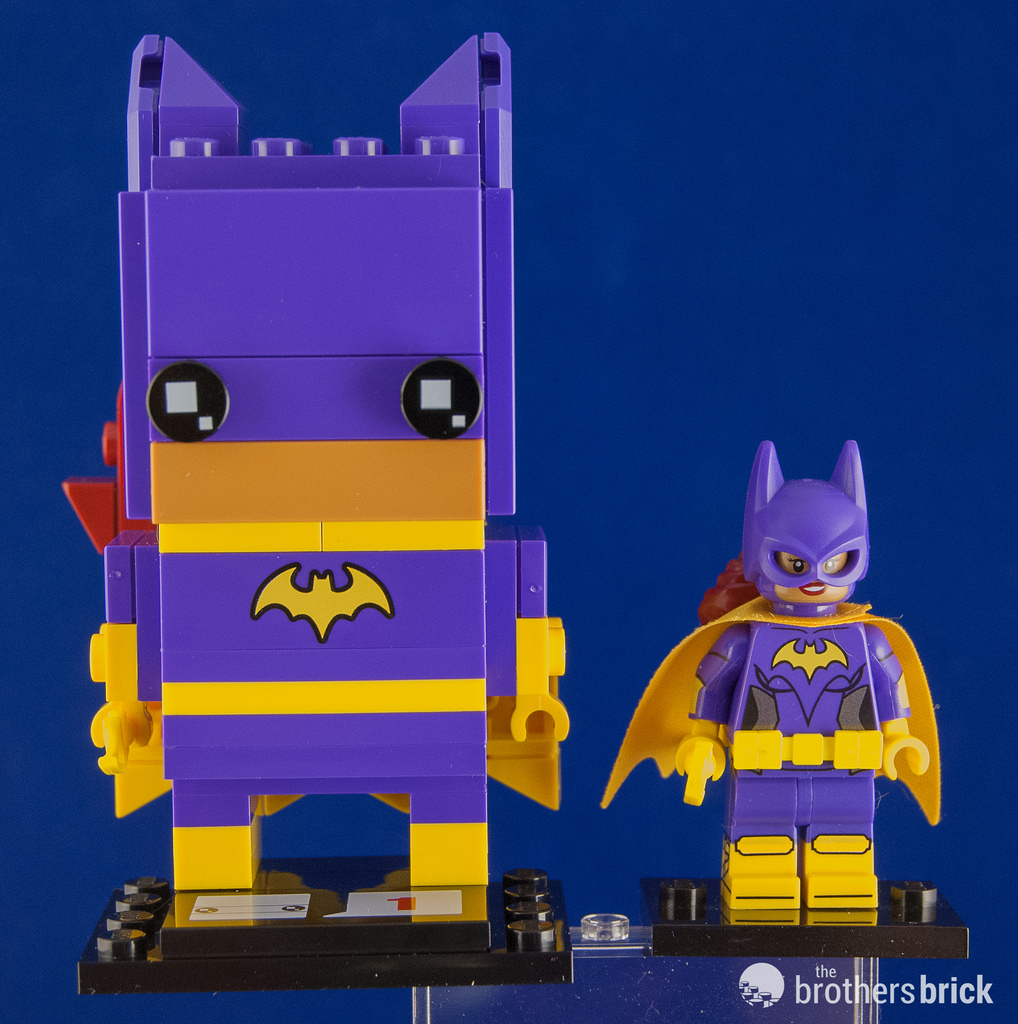 Puppy dog-eyed Robin plays a key role in The LEGO Batman Movie, and his starstruck expression is captured well here. 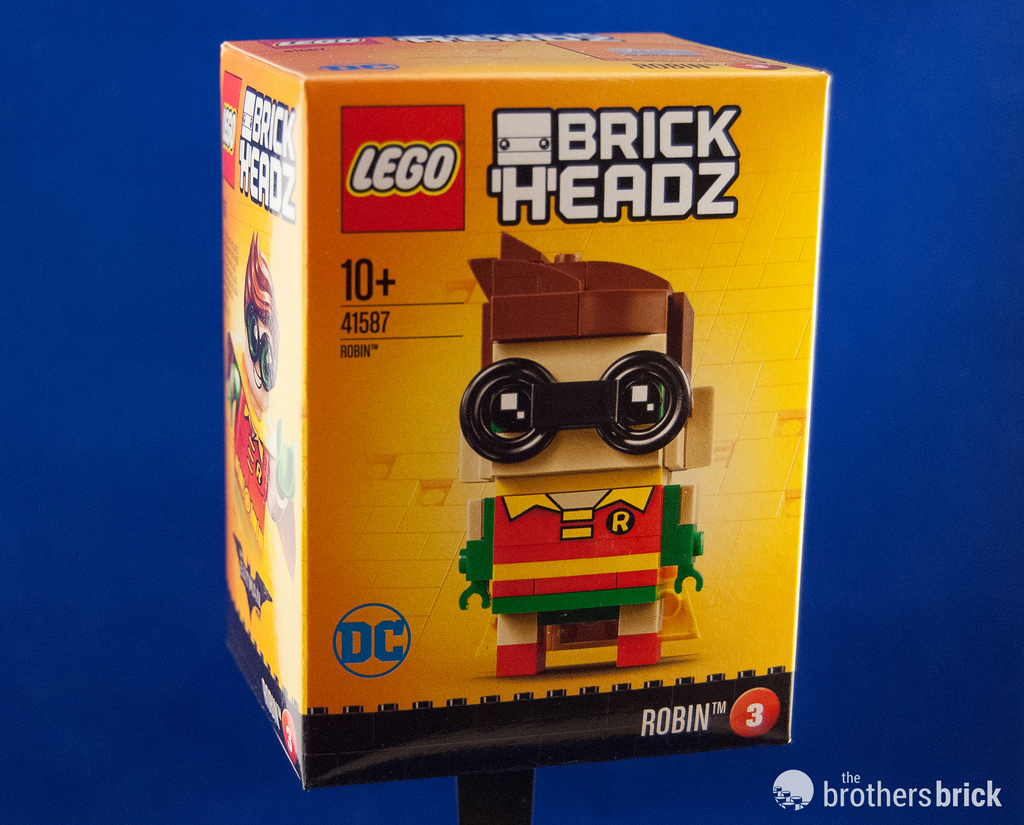 Like Batgirl, the only exclusive printed element is the 1×4 brick for the shirt design.

Robin’s shock of unruly hair is held on with some additional brown SNOT bricks. 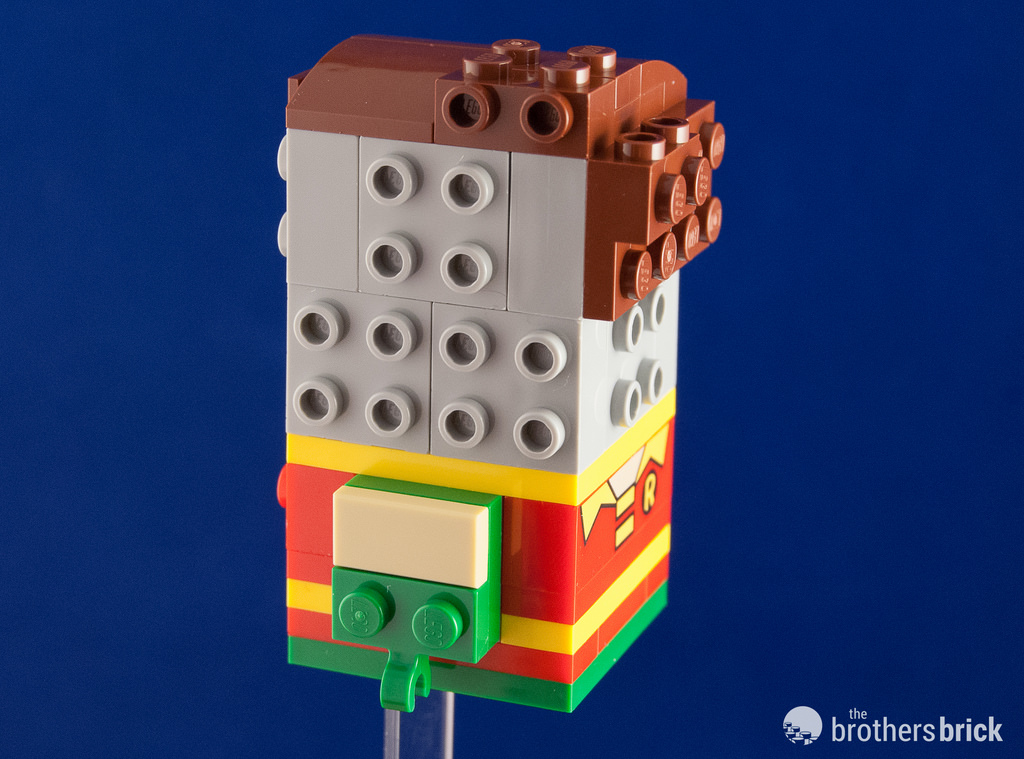 The LEGO Batman Movie provides a much-needed explanation for this outlandish outfit. True to form, Robin’s bare legs show between the green tights and red boots. Unlike Batman and Batgirl, Robin’s ears are made with double-wide cheese slopes, and his cape is a unique style.

Robin’s oversized glasses are created with a pair of black life preservers, and his green eyes can just barely be seen around the edges of the huge pupils. 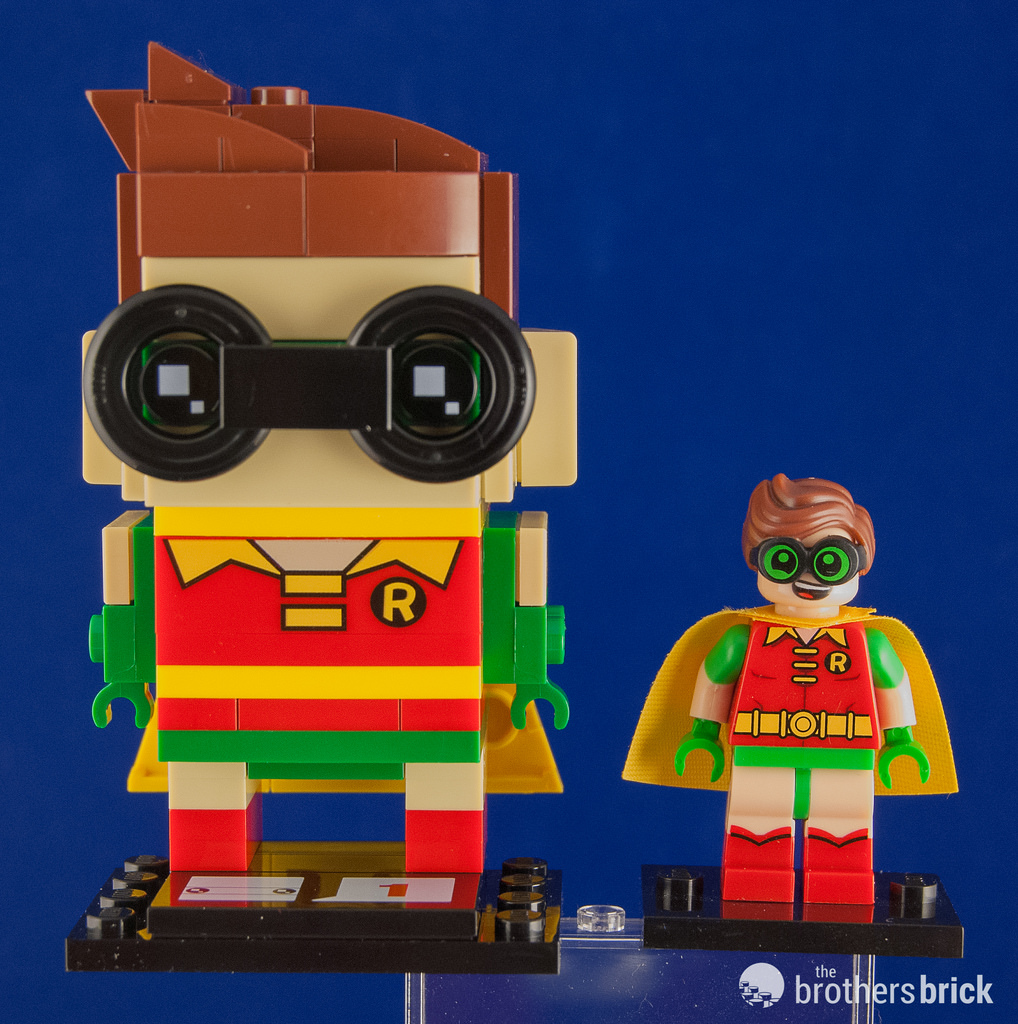 Without a doubt the cutest incarnation of this supervillain to be put on the screen, the Joker’s flowing hair and suave purple suit make this build my favorite of the DC characters. 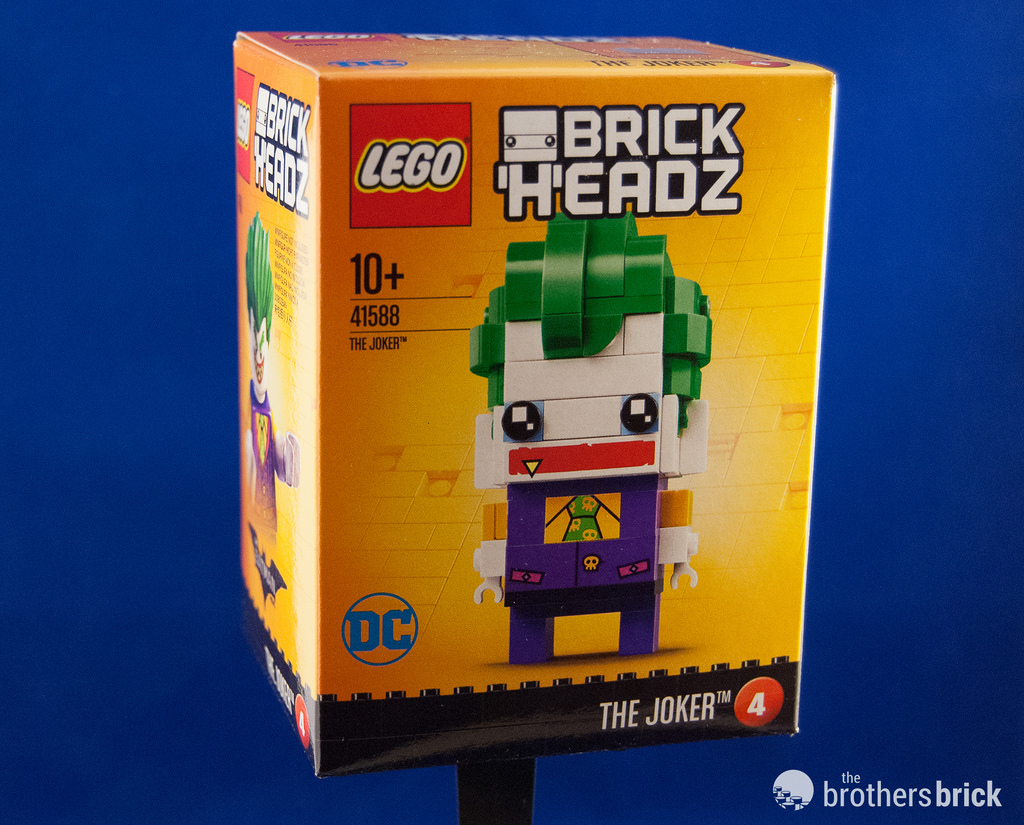 The Joker gets three exclusive elements, with a unique 1×4 tile showing his red lip stick and adorable snaggle tooth, and yellow and purple bricks for the shirt and coat.

The Joker’s billowing hair gobbles up the entirety of the extra 60 pieces this set has over Batman. The hair consists of dozens of small elements, including 10 of the new 1×1 quarter circle tiles in green. The hair even has a little bang slipping down over the Joker’s forehead thanks to some clever SNOT work. The pointy back is accomplished with cheese slopes.

I do wish the suit included the pinstriping seen on the minifigure, but nevertheless this is a remarkable resemblance. The Joker’s blue eyes are light royal blue 1×1 plates behind the enlarged pupils. 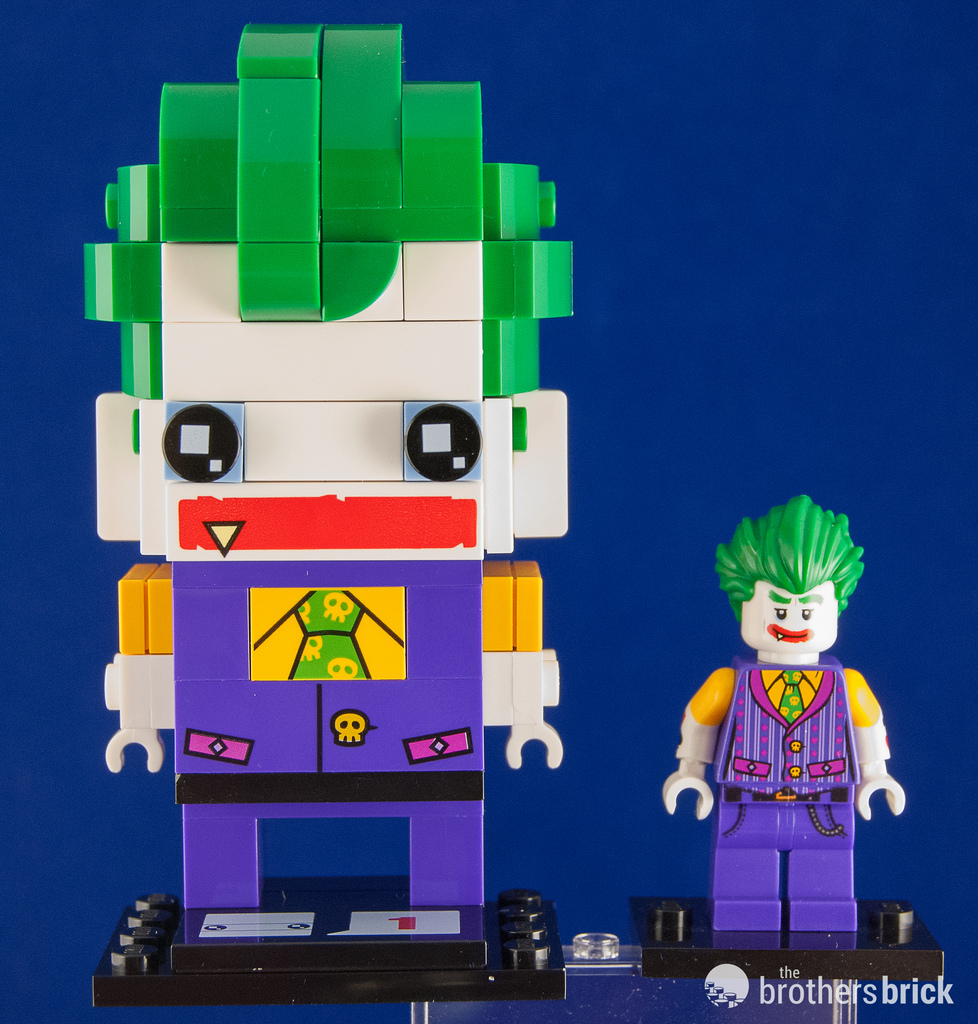 I’ll admit it; I’m hooked and I want to collect all of these cute figures. Even if you’re not a fan of the characters LEGO is producing, the basic assembly is very easy to modify and customize. I already want to go build my own versions of characters that LEGO will probably never create. My one complaint is that even when attached to their baseplates, they have a tendency to tip over backward. The figures are all very sturdy, however—the Joker even took a tumble from my desk and survived with no disassembly. The $9.99 price point is fitting for most of the characters, and quite a bargain for the parts-heavy figures like The Joker. If you have no interest in figures of this style, many of them are still solid buys for parts monkeys.

LEGO BrickHeadz will be available to LEGO VIP-card holders in LEGO stores and the LEGO Shop Online beginning Feb. 15, and available generally March 1.

Don’t miss our reviews of other sets from LEGO sets from The LEGO Batman Movie: