The first words in my review of The LEGO Movie three years ago were “I’ll admit it: I had very low expectations for The LEGO Movie.” But as we’ve all discovered since then, everything was awesome! Nevertheless, I attended a press screening this evening of The LEGO Batman Movie with fairly moderate expectations, not expecting a miracle twice.

While I would be hard-pressed to call The LEGO Batman Movie miraculous, much of the movie does deliver on expectations set by its predecessor, from its constant stream of sight gags and totally unexpected cameos to the largely brick-built world that the minifigs inhabit. 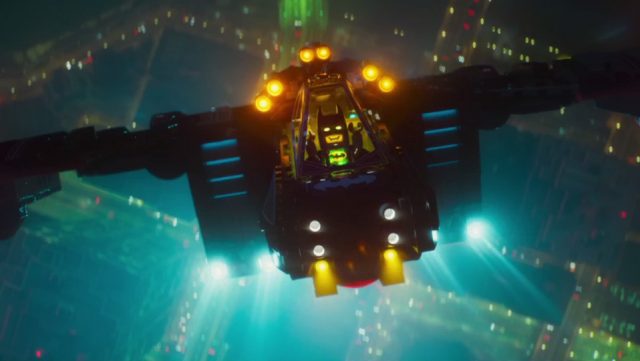 The movie begins with a voiceover narrating the opening logos that sets the tone for the first half of the movie, and the humor continues to build as each new set of characters appear on screen — a never-ending stream of DC Universe characters going back over 70 years, with the Joker even slyly suggesting that you Google them if you’re not sure they weren’t just made up on the spot (yes, Condiment King is indeed a totally real DC character). Indeed, all the villains and costume changes feel a bit like justification for the dizzying array of unique LEGO minifigures released with recent LEGO Batman sets, including the LEGO Batman Collectible Minifigures.

The first half of the movie is frenetic with its sight gags, geek references, and cameos, culminating in a truly monumental batch of cameos that had the theater roaring. As Batman battles the second major batch of villains, the pacing of the movie slows, with punching, kicking, and explosions interspersed with Important Life Lessons — I’m not giving anything away by saying that you’ll learn about the importance of teamwork and family, assuming you don’t already know about those things.

I’m personally not a huge Batman or DC fan, but I still appreciated references to every (yes, every) Batman movie and TV show of the past 50 years, and I’m sure there are references I missed that more knowledgable fans will enjoy. Unfortunately, due to the sheer number of characters, many potentially great characters voiced by well-known personalities are relegated to background roles with just a few lines at most.

The major voice actors do a marvelous job breathing life into our little plastic friends, with Will Arnett totally living up to my request three years ago: “I want Will Arnett as the next Batman.” Michael Cera (Superbad, Arrested Development, Scott Pilgrim) is perfectly cast as the rather hapless Dick Grayson, while Rosario Dawson plays the comedic straight man as Barbara Gordon, supported by Ralph Fiennes’ impeccable Alfred.

Despite the heavy action throughout the whole movie (punching, kicking, and explosions galore), as well as adult-focused references to other Warner Bros. properties (including the recent Batman vs. Superman and references to other movies well beyond this movie’s PG rating), the film is ultimately a kid-friendly affair. There is never much doubt that the heroes will emerge victorious from their imminent peril, and innocent bystanders, small animals, and super-villains alike never come to any real harm — one cute creature even yells “I’m fine” after a certainly fatal encounter.

Visually, the art direction in The LEGO Batman Movie departs from the purely brick-built aesthetic of The LEGO Movie. The water, smoke, and clouds are all realistically rendered, which was disappointing from the standpoint of a LEGO builder and felt like a bit of a step backward from the amazing, pure-LEGO design work on the earlier movie. Similarly, the scale never changes from the viewer’s point of reference as it did frequently during The LEGO Movie, which incorporated forced perspective and microscale interspersed with standard minifig-scale buildings, vehicles, and backdrops. Nevertheless, much of the world is rendered as though built entirely from well-loved LEGO, down to the subtle nicks and scratches on Batman’s cowl, the molding seam on the Joker’s green hair, and the occasional thumbprint on a flat surface. Many of the LEGO models are fantastically created, particularly the vehicles seen in the background. A large cargo aircraft serves as a set piece for one scene, and it is one of the best properly sized minifigure-scale aircraft I’ve seen.

Despite underutilizing many characters and what I felt was an uneven second half, it’s still easy for me to recommend The LEGO Batman Movie to both LEGO fans and DC/Batman fans. The strength of The LEGO Batman Movie may be that it is a solidly comedic, winkingly self-aware entry in the Batman movie canon. Its weakness from a LEGO fan’s standpoint is that it is first and foremost a Batman movie, set only incidentally in a LEGO world — the film is a funny Batman movie that would probably have worked just as well in any other style of animation, not another excellent LEGO-centric movie. As a LEGO fan who’s not much of a Batman/DC fan myself, that’s a bit disappointing. Still, the movie was consistently entertaining, and there were enough cameos and references to get me through the overwrought Important Life Lessons.

Go see The LEGO Batman Movie, but do it because you want to be entertained and amused for an hour and forty-four minutes, not because you’re expecting a uniquely LEGO experience.

Don’t miss our reviews of the LEGO sets from The LEGO Batman Movie: