LEGO’s crowd-sourced Ideas platform is on a roll this year, with sets and news coming in rapid succession. Early this year we reviewed the 21305 Maze, and learned that the Apollo 11 Saturn V and Adventure Time characters will become sets. At the beginning of this month, LEGO announced the Old Fishing Store, and we reviewed the 21307 Caterham Seven 620R at its launch a few weeks ago. Now, 21306 The Beatles Yellow Submarine is available on The LEGO Shop. The set will retail for $59.99 USD and contains 550 pieces. 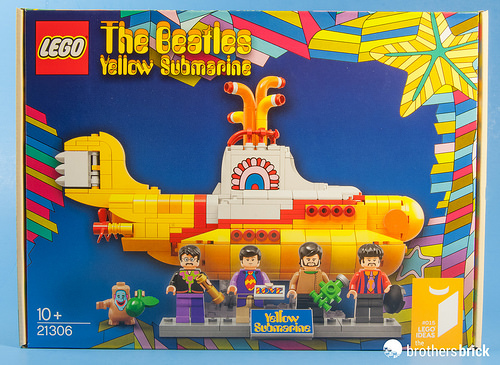 Of course, the first thing anyone is going to do upon acquiring Beatles minifigures is stage them crossing Abbey Road, so we’ll get that one out of the way now. 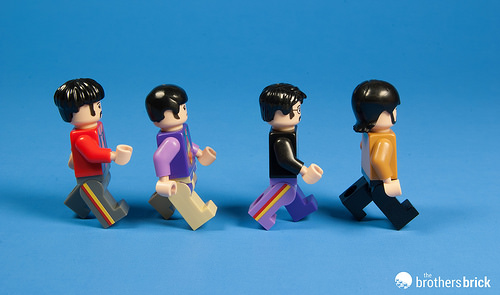 Now with that taken care of, let’s look at the rest of the model. 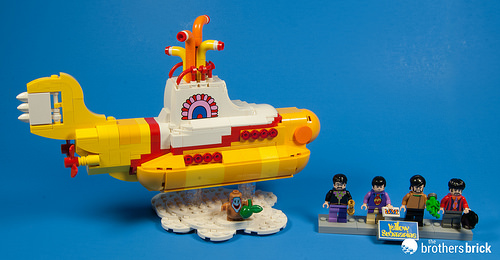 This is an odd choice for a LEGO set. The LEGO Company has been acquiring a lot licenses in recent years and turning them into LEGO sets, but until now they have mostly drawn from the Science Fiction/nerd/geek  regions of media — think Doctor Who, The Big Bang Theory, or Ghostbusters. LEGO has chosen quite a remarkable touchstone for its entry into broader pop-culture, though. The Beatles have had a profound influence on modern music, and have hoards of fans the world over. Inspiration for this set is drawn from the 1968 animated film The Beatles Yellow Submarine which stars John, Paul, George, and Ringo in a psychedelic adventure in the fantasy world of Pepperland, and pits the band against the Blue Meanies. 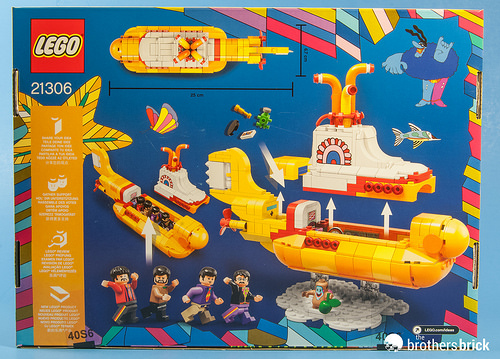 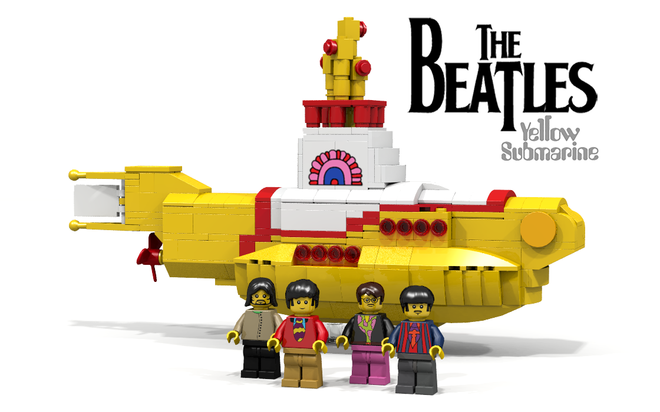 The model has been almost wholly redesigned from Kevin’s prototype. But while the official model undeniably looks better than Kevin’s prototype, we can’t be too harsh on Kevin, since a number of the pieces Justin employed to capture the complex shape literally did not exist when Kevin designed the prototype.

The set’s box is chunky, with deep sides and a hinged lid like many of the other Ideas sets.

The cover features trippy palm trees and portraits of the band on the bookends in the film’s cell-shaded style. The inner walls of the box show the Beatles peaking through portholes in both their minifigure and animated forms. The box contains five numbered bags of bricks, and a small, thick instruction booklet. Each of the five brick bags contains one passenger: the four Beatles and their traveling companion, Jeremy Hillary Boob, a weird brown creature with a painted blue face and magical powers. 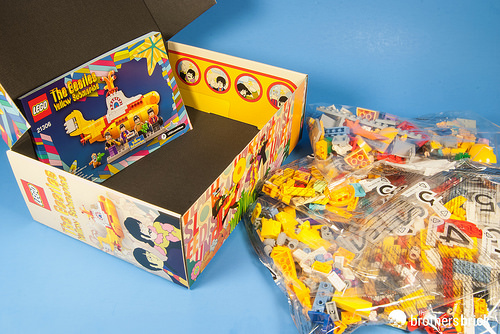 The instructions give an intro to the film and the set, and the back pages contain brief interviews with the fan designer and model designer.

The submarine is a mix of  yellow and bright light orange with lots of parts appearing in each color for the first time. This lends a patchwork feel that’s quite authentic to the source material. The base of the model is nicely curved, making this a great source for 1×2 inverted curved slopes in bright light orange and, for the first time, yellow. Above the curved base is a ring of brackets, to attach more curved slopes sideways for the lower hull. All of this attaches strongly, and the finished model is very sturdy and surprisingly heavy. 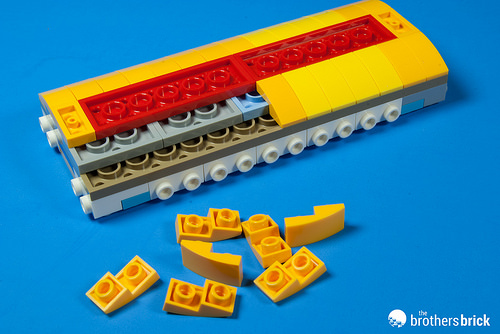 The inside of the submarine accessed by removing a twelve-stud length of the roof and conning tower. The roof is attached firmly enough that the vessel can be lifted by the conning tower, but it comes off smoothly when intended. It hides a large passenger compartment with room for all four minifigures. 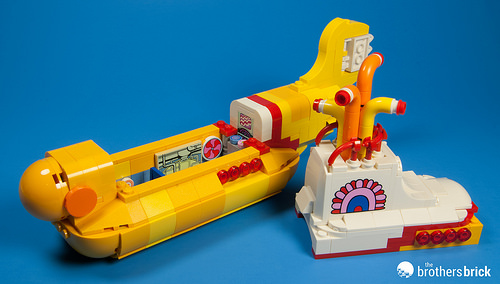 There’s one blue minifigure seat in the front, and room behind for three other minifigures, but sadly there’s no room for Jeremy. 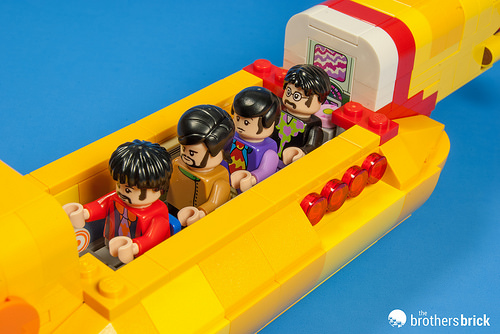 The inside of the sub is filled with specially printed pieces in a variety of sizes — like the Caterham Seven, there are no stickers in this set. Four unique styles of 1×1 round tiles printed with radial patterns make spinning gears, and you get three copies of each (counting the spare). 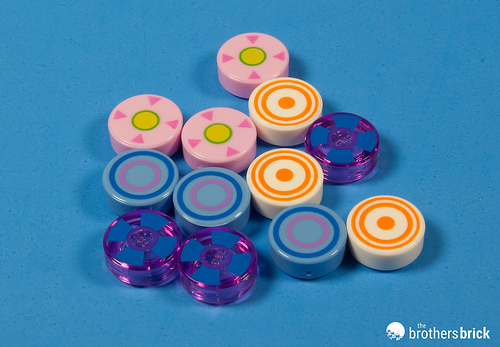 Screens and switches are at either end of the compartment, and 2×4 tiles on the walls are printed with mechanical patterns which will be very useful for Steampunk creations. 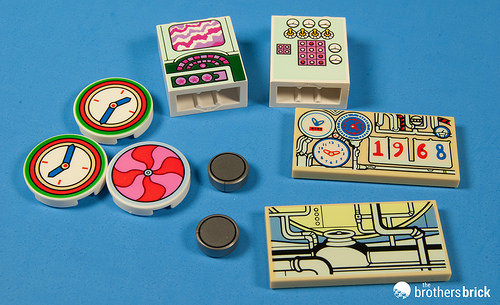 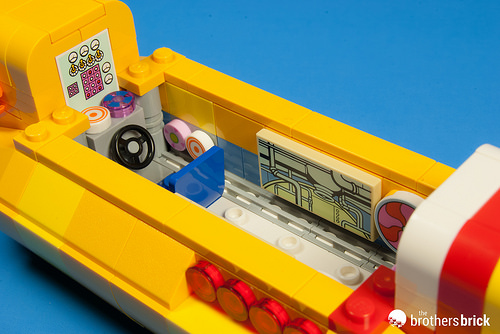 Behind the passenger compartment in the tail is a three-stud long cargo hold which houses the Beatles’ accessories when they’re voyaging. 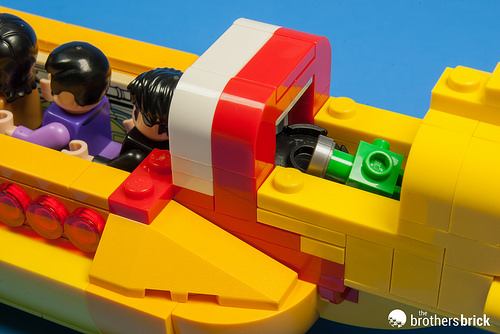 Above, the white conning tower is a clever design with snotted in curves for the front, large printed 1x4x3 panels on the sides, and some nifty uses for the new 1×1 quarter-circle tiles (which come in both red and white in this set). 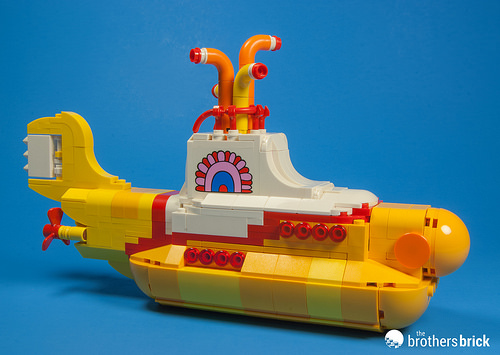 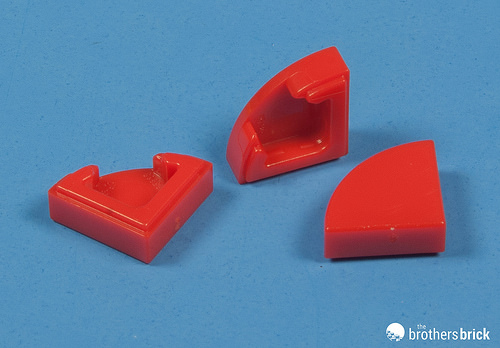 The red railing up top is made with sausages and red mechanical clips — a new color for this useful part. At the very top, the four periscopes employ the newly redesigned macaroni tubes in both yellow and orange. To the rear, the rudder uses one of the just-released 2×3 tiles in white. 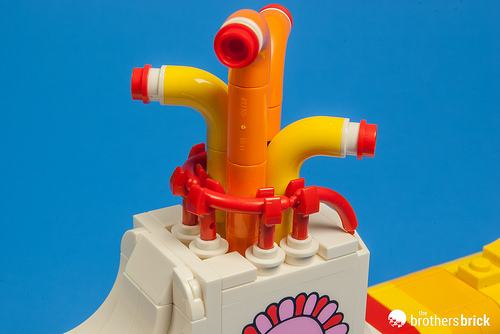 The submarine rests atop a pillowy cloud of white plates, suspended with four 2×2 round transparent bricks. In front is a single-studded tile for Jeremy. The minifigures can be displayed outside the set on podium made of light grey minifigure stands, adorned with a 2×4 tile printed with “Yellow Submarine.” 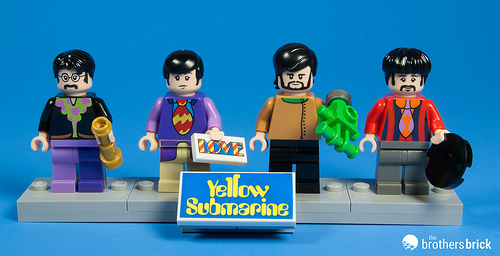 John and Ringo have striped pants, a ribbon of yellow and red running down the outside seam of each leg. George and Ringo both have hairpieces appearing in black for the first time; Sabine Wren’s hair for George, and Ron Weasley’s hair for Ringo. Each of the figures carries an accessory: a telescope for John; a “LOVE” letter for Paul; a “submarine monitor” for George (it’s totally not some other sort of paraphernalia) made of a bright green Nexo Knights robot body and a printed 1×1 round tile; a black hole from the Sea of Holes for Ringo, which is just a black 2×2 round tile (thanks to keen-eyed reader Thomas for pointing out that it’s not a record); and a green apple for Jeremy. The minifigure prints are detailed as usual, all having double-sided heads with a regular expression and a singing expression. 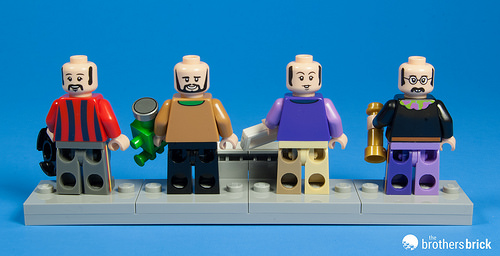 The Beatles’ psychedelic movie of an undersea voyage may be an unusual subject for a LEGO set, but the model is remarkably well designed and fun to play with, and the figures look great. This set will tap into a much broader audience than traditional LEGO themes, and getting more people to pick up a LEGO set for the first time is always a great thing. Love is all you need, but if you’re a Beatles fan, you’ll want this too.

21306 The Beatles Yellow Submarine includes 550 pieces and retails for $59.99 in the US (prices vary globally). The set is available in stores and online Nov 1.