This LEGO drone by Guy Smiley has the build of a machine aimed at impact and intimidation rather than agility and speed.  It bears a resemblance to the drones in the awesome short film Keloid, a source of inspiration for LEGO  drones since 2013.  Those thunderous thighs would make a grown man quiver, not to mention the weaponry carried in its arms.  I’m not exactly sure what type of weapon is in its left arm, but it looks like some sort of futuristic chain gun with a handy supply of rounds in the chamber. 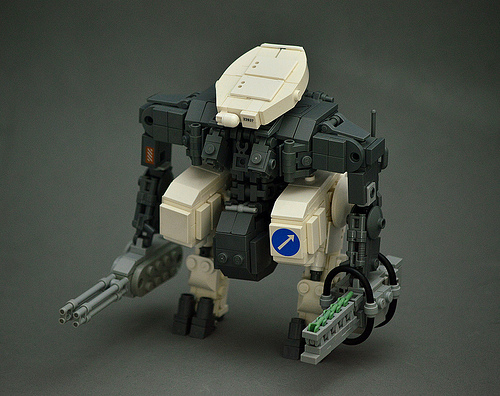 I particularly like Guy’s colour blocking technique, the use of two main colours nicely highlight the shaping of his drone.  There are some clever parts in there if you take a closer look, it’s not often cupboard doors form the head of a drone!

If you liked this build, Check out this previously blogged Militech Weapons Platform and drones by drone builder extraordinaire, Devid VII which were also inspired by the film Keloid.