The next wave of Nexo Knights is upon us, and we’re continuing our review series. We’ve already reviewed the four Ultimate series Nexo Knights sets. The sets are available in some markets already, and should be widely available soon. 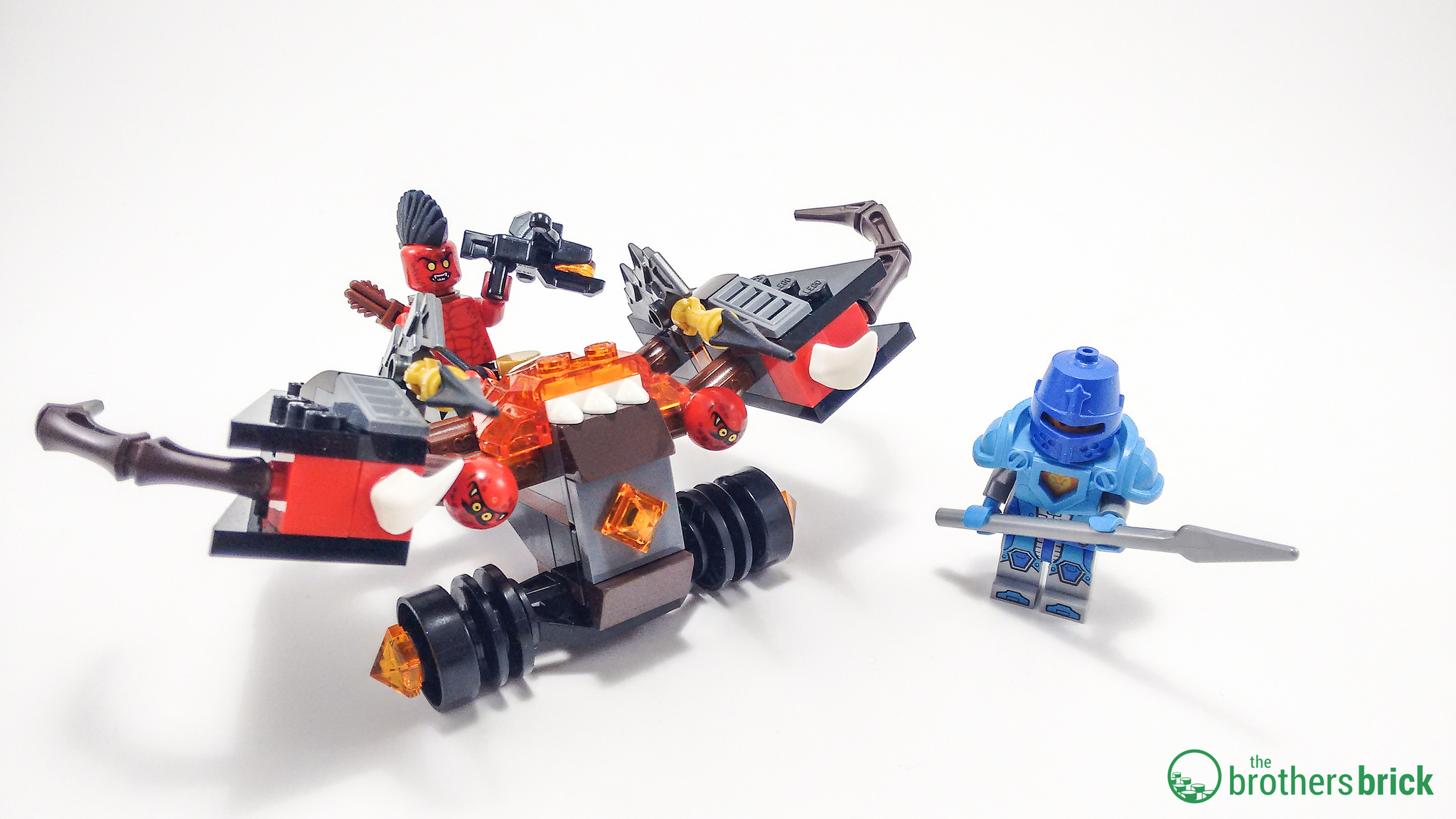 In wave one of Nexo Knights we got two £7.99 / $9.99 / €9.99 sets that weren’t in the Ultimates line. These two were 70310: Knighton Battle Blaster and 70311: Chaos Catapult. In my opinion, these were perfect little sets: for a small amount of money you were getting two minifigures and some nice new pieces. I think these trump most of the Ultimate sets and even 853515: Knights Army-Building Set or 853516: Monsters Army-Building Set due to their inexplicably high price here in South Africa (close to $30).

Enter, then, 70318: The Glob Lobber, which has some big shoes to fill. It’s the third set of its kind, and it functions as the second small machine for the lava Monster Army.

Ranking this set, it will have to go in the middle. The Glob Lobber doesn’t have any of the nice new or recoloured parts from the Knighton Battle Blaster, but the pieces are far better than the Chaos Catapult, in part because of the inclusion of two “Globs”, which are fun printed ball joint pieces, as well as some of the new spike pieces in black.

The minifigures are also really nice. They’re both completely different from the other two similar small sets. The monster is lacking armour but you get a nice rubber mohawk piece, and the knight has, in my opinion, the best helmet piece. It looks a bit funky in this colour, but it fits into the Nexo Knights theme. 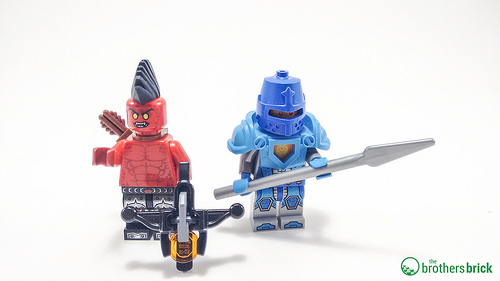 As I mentioned at the outset, this isn’t the best of this class of sets, but it comes close. It’s great for collectors and kids alike, and you won’t go wrong picking it up. 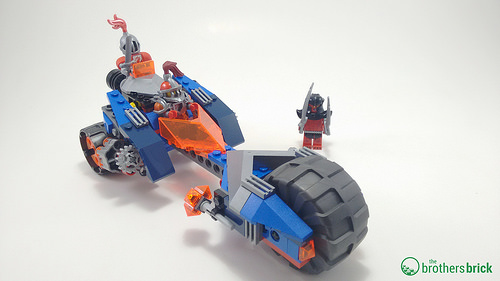 When I first saw images of Macy’s Thunder Mace I had no idea what it was supposed to be. At first I thought it would be a small mace, mirroring the weapon Macy uses and the fact that 70320: Aaron Fox’s Aero-Striker V2  is a working LEGO crossbow.

Honestly, after building it I’m still confused. Once built, the vehicle really looks unfinished. The long middle centre section is only two studs wide and looks even smaller than that, thanks to the front and 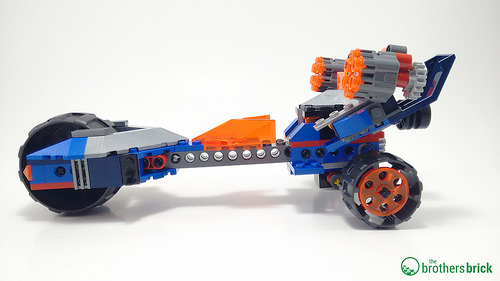 back being so wide. It looks as if this vehicle at time had another vehicle attached to it that has since been removed, and now we have this half-finished build.

The front of the vehicle is dominated by an extremely large wheel and one of the new large “roof tile” pieces. This is the cheapest set to get either one of these pieces, so it may be a good buy if you just want those. The back is where most of the pieces go and where you’ll find the most interest. Macy herself gets a little cockpit thanks to one of the new windscreen pieces — where again, this is the cheapest set for that element. Her Squirebot (or Macybot) gets even less with a tiny transparent window piece. 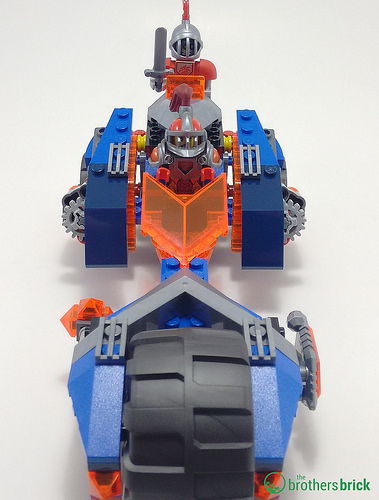 To either side of the duel cockpits there are a pair of the six-shooter stud launchers. They can be hidden away or brought to bear thanks to a gear system at the back. From there you can shoot them off individually.

This highlights the problem with the odd shaping. The shooters are oddly placed, so even though it feels as if you should be able to hold it with one hand and shoot off the studs, it just doesn’t quite work. However, altering it wouldn’t be too difficult.

For figures you get Macy and her Macybot, as well as a Crust Smasher. While the Macy, her built up mace and the Crust Smasher have all appeared in other sets, the Macybot is somewhat unique thanks to recolours of the rubber pauldron pieces and a 1X1 printed tile piece. The tile features a great silver print of a dragon head (the house sigil of Macy’s family) and I can see it getting great use elsewhere. Best yet, the set seems to come with an extra one. 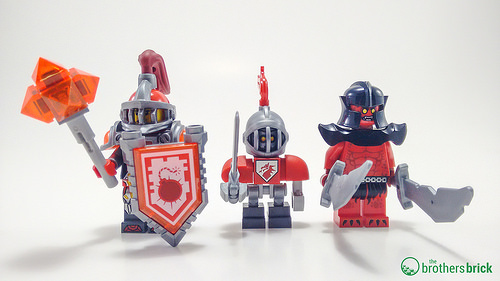 Overall, I really feel like this is an uninspired, lacklustre set that is, however, partially redeemed by some nice pieces, especially because it’s the cheapest way to get so many of them. As something to play with, it’s only going to be good if you or your kid have a particular love for Macy. 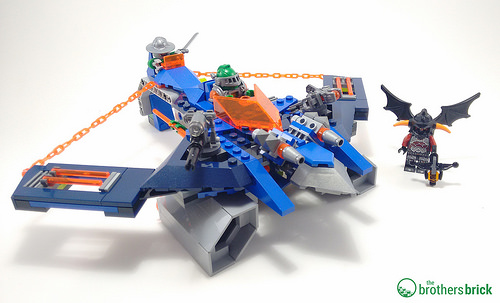 This set is a bit of special one not only for Nexo Knights, but also for LEGO’s current lineup right now. Many sets have play features, but few are play features. The Aero-Striker V2 comes complete with a pistol grip and a trigger, turning the entire vehicle into a weapon that shoots off bolts just like a real crossbow.

The aircraft mirrors Aaron’s signature weapon, so he’s flying around in an aircraft shaped like his weapon. This hearkens back to the miniature build that came in 70317: The Fortrex, and is likely the upgraded version that small craft, as alluded to by the V2 in the name of this set.

The finished model actually makes for an extremely cool fantasy sci-fi spacecraft, while still managing to look like a crossbow. Under the fuselage you’ll find the shooting mechanics hidden away nicely, except for the grip. Made of a few Technic beams, it connects to a mechanism built on top of two spring-loaded bolt shooters by way of a strut.

I must commend the designer(s) of this set on the ingenuity they used here in making the shots go off at separate times using the same action. This did this by simply stacking the shooters on top of each other. When the trigger is pulled the second shot cannot physically be activated until the tail of the first shot has flown off. Once the first has fired you just keep squeezing the trigger and the next one will shoot.

Looking at the model as an aircraft, it’s just as good. There have been a lot of new pieces created for the Nexo Knights line, and they’re used perfectly here, including a dark blue recolour of the new large V-shaped slopes. The silver variant of these is available in most of the Wave 2 Nexo Knights sets, but this set is the only one with this colour. There’s also, of course, multiple transparent reddish orange pieces as per the theme’s colour scheme. And speaking of colour themes, the different shades of blues, orange and greens somehow work here. The lime green pieces used in the trigger are the one sore point there, but they look a lot better than red pieces would have (the obvious choice for triggers).

As LEGO is wont to do lately, a separate vehicle can be detached from the main build. Lance’s cockpit can be shot off from the main body of the craft to become its own little flyer. This feature honestly could have been left out. It adds some play value, but the flyer comes out looking like a supercharged snow sled and the bigger vehicle looks horribly incomplete. 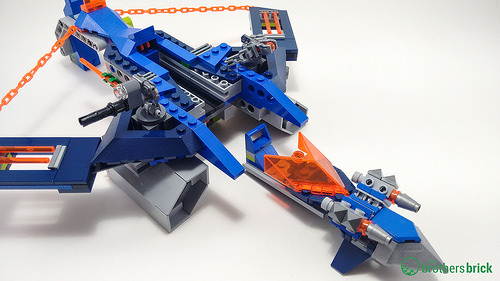 Minifigures included are Lance, his Lancebot and an Ash Attacker. This is the same Lance we’ve gotten in other sets; this time with a much larger crossbow build. 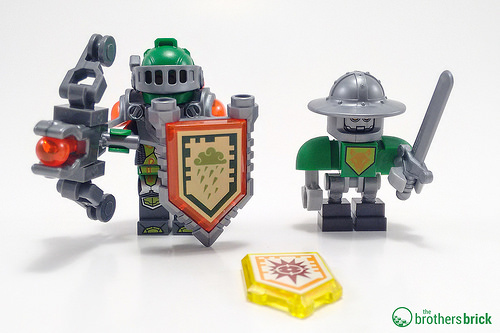 For once, the size of the weapon is justified by the fact that it can be removed and used as a mounted weapon on the vehicle.

The Lancebot comes with exclusive recoloured green pauldrons and and a printed 1X1 tile. The print of a fox head is really nice and you will probably get an extra in the box. The Ash Attacker is also the same as other sets, but comes with a little build on the back to give it wings. It’s a subtle change but it makes 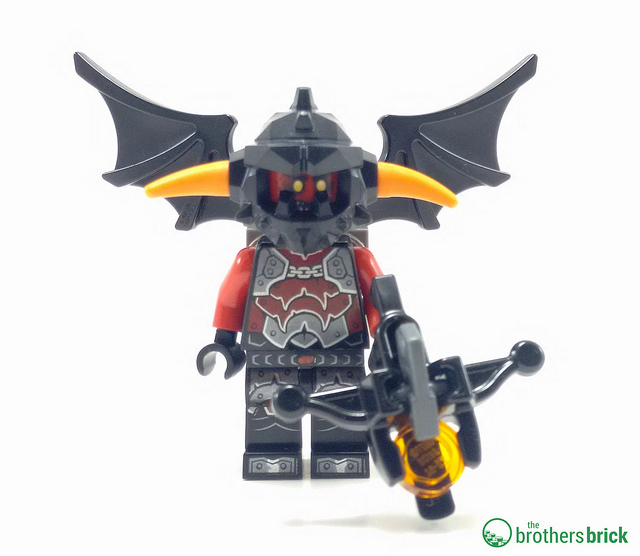 much more sense than giving it a smaller flying vehicle.

This is a standout set from wave 2 of Nexo Knights. It manages to be both a fantastic play toy and display piece while still being a decent parts pack. My favourite parts of it, though, are the hexagonal engine pods made from wall pieces. The design is definitely worth stealing for your own spaceships. 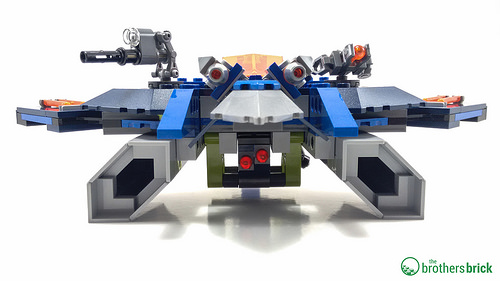 So there’s a good chunk of Nexo Knights wave 2 looked at. Which was your favourite?

The Aero-Striker remains my favourite of the bunch, but I may still be fawning over those engine pod designs. Be sure to tell us which one gets your vote and, more importantly, your money.