…but we all know Dave won’t stop. RichardBoard conquered us with just a single picture of his recent build recreating the scene of probably the most tense confrontation between a human and artificial intelligence, from 2001: A Space Odyssey. 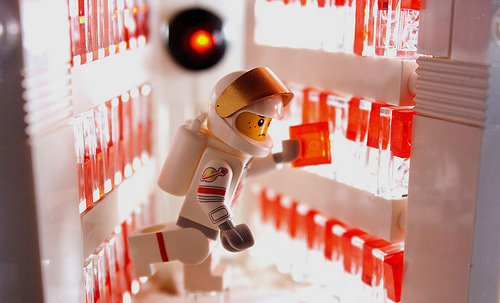 Although this vignette is much smaller than the original spaceship from the movie, Richard did an amazing job lighting it, making all the small transparent plates look awesome. HAL 9000’s red eye being blurred in the background gives the whole shot a truly cinematic look. But Dave’s spacesuit is the only thing that looks a little bit odd; that’s due to a tiny Classic Space logo on his forearm, which, in fact, is an amazing way of combining too universes — LEGO and Stanley Kubrick’s — in one picture.