The official LEGO Ideas blog has just confirmed that nine LEGO Ideas projects have hit the 10,000 votes required to go on to the first review of 2016. 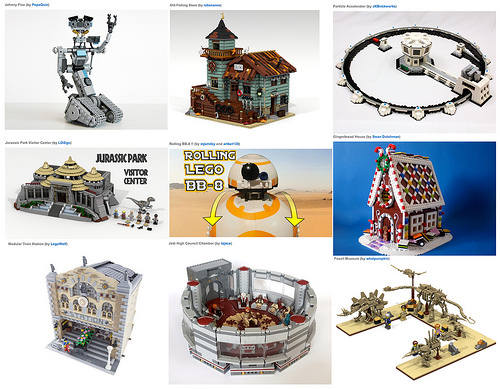 The nine projects include two Star Wars based ideas – a rolling BB-8 and the Jedi high council chamber.  There are four minifigure scale buildings: an old fishing store, modular railway station, Jurassic Park visitor centre and a gingerbread house. The movie based project this time is Johnny Five, a model of the eponymous robot. Finally, in the science themed section we have a fossil museum display of dinosaur skeletons and a functional model of a particle accelerator.

Readers: Which projects have captured your attention, and which do you think will go on to pass the strict LEGO review criteria and become an actual LEGO set?

Johnny Five by PepaQuin
Number 5, a.k.a. Johnny Five, is the hero of the Short Circuit movies. Number 5 was one of five prototype robots, but after being struck by lightning gained a sense of awareness and free will. The multitude of his expressive abilities, combined with a youthful demeanour and thirst for knowledge (need more input!), made him an instant favourite with audiences in the 80’s. This small model attempts to replicate the sense of wonder that the robot often displayed. It stands around 7″ tall and is very flexible. Arms, torso, head, and even ‘eyebrows’ can be posed however desired. Also featured are a retracting shoulder-mount and freely moving treads. Number 5 contains approximately 300 pieces, making this an ideal mid-range set.

Old Fishing Store by robenanne
The building consists of roughly 2160 parts and three floors: the main store, office, and lookout. I used the colours brown and sand green that gives it a realistic feeling. Three Mini-figures could be added such as a fisherman, the store keeper, one captain. And a lot of details.

Particle Accelerator by JK Brickworks
Help these intrepid scientists with their quest to find the (Mini)Figgs Boson! Or maybe just to find out what a 2×4 LEGO brick is made of. This working particle accelerator uses a simple system of spinning wheels to accelerate a LEGO ball around a ring. Although the propulsion system is different than that of a real particle accelerator, it’s a great way to illustrate the concept. Not to mention, it is fun to play with. Multiple balls can be inserted simultaneously and obstacles can be introduced for the ball(s) to collide with.

Jurassic Park Visitor Center by LDiEgo
The biggest set in an utopian Jurassic Park Theme would be the Visitor Center. This project features a complex building in the facade, as well as some rooms inside to recreate every scene in the movie.The rooms can be hinged or detached for a better play experience. There is also space for a secret compartment at the main entrance, under the stairs.

Rolling LEGO BB-8 by mjsmiley and artbot138
Bring BB-8 to Life with a LEGO model that actually Rolls! This Model is able to roll on a single axis while keeping BB-8’s Head up on Top! BB-8 Comes with attachable arms for both his Electric Zapper and Thumbs-up Torch abilities. BB-8 has a desert base station that uses a turn crank to demonstrate his rolling ability. The base station has a compartment to hold BB-8’s accessories.

Fossil Museum by whatpumpkin:
This set attempts to capture that magnificent experience in a small display featuring four popular dinosaurs (and one popular pterosaur) in skeletons as accurate as I could achieve at this scale.Additionally, a palaeontologist and a family of three are in the exhibit, to stand in awe at the creatures before them.

Gingerbread House by Swan Dutchman
There are some great sets available to make a Christmas village… and every year there is a new set to expand it. Wouldn’t it be nice to expand your village with a gingerbread house? This gingerbread house is almost edible: it’s made of cookie walls, decorative icing, candy and caramelized windows. And why not?… you can even put a light inside to brighten things up.

Modular Train Station by LegoWolf
Add your favourite locomotive to your Lego modular street with a train station! To fit in with the early twentieth century look of other buildings in the series, this model takes inspiration from nineteenth century stations in Europe. These structures were cathedrals to industry, marrying classical stonework and statuary with technological innovations like all-glass roofs.

Jedi High Council Chamber by lojaco
This set recreates the Jedi High Council Chamber on Coruscant, the room where the Jedi Masters meet during the rule of the Galactic Republic. With this model you will be able to reconstruct the decisive moments of the second Star Wars trilogy (Ep. I, II & III): from the first meeting with the little Anakin, to the growth of the Dark Side of the Force with the unborn Darth Vader. The set, with sliding doors mechanically operated, can be enriched with a LEGO Power Functions Light item (ref. 8870) to create glowing pushing buttons.