Koen has managed to capture the cute shape and colours of a Wiggler in its calm state in his latest LEGO creation. There are many Mario Bros fans out there who will not need an explanation of what a Wiggler is but, for the uninitiated, Wigglers are caterpillar-like creatures in the Mario Bros games. In their usual state, Wigglers are yellow in colour and happy, relaxed little creatures, but when jumped on they turn red and become dangerous and unpredictably angry. 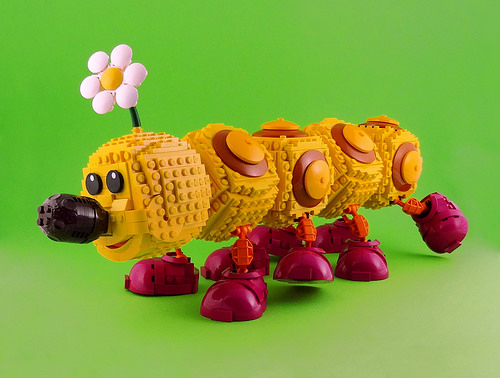 Koen has cleverly used a mudguard part to depict the gentle curve of the Wiggler’s smiling mouth and utilised Bionicle joints to allow those caterpillar legs to get into position.  With the cute daisy to top things off, this is an instantly recognisable build.

Mario Bros have been featured numerous times here at TBB, so fans might enjoy taking a look at these previously blogged creations:

Super Mario Bros Bricks
Brick-built Mario bounces toward LEGO Bowser
LEGO Super Mario Blocks are ready for punching
Lego MarioKart
How much would you pay for a 6 ft tall Mario?