The notion of zombies walking the earth strikes me as completely ridiculous and I never got into the whole ApocaLEGO theme either, but yet, somehow, I am completely hooked on The Walking Dead. I first saw an episode about two years ago and since have binge-watched the first four seasons and am camped in front of the TV for every new episode. I can’t really explain why. Perhaps it’s because some of the characters are so unsympathetic that the thought of a half-rotted zombie tearing their guts out is something to look forward to. Nobody seems safe, however, and whenever the more likeable characters are killed off, such as Dale Horvath in the 2nd season, I feel pretty much gutted myself (pun intended). A lot of fan-built LEGO models based on The Walking Dead are focussed on customized minifigures, but I wanted to have a vehicle from the show as part of my movie car collection. My choice: Dale’s Winnebago Chieftain RV. 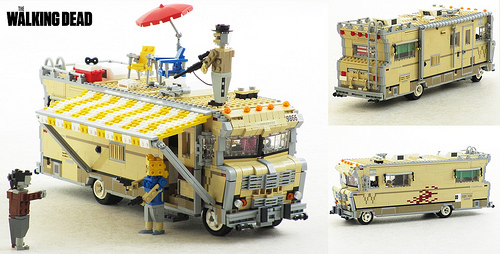 In the first two seasons of the show the RV was usually in the center of the survivors’ camp, with Dale on the lookout on top of it. A major inspiration for my version was the wonderful minifig scale version by Mr. Zumbi, which we sadly failed to blog when he posted it a few years ago. While many people undoubtedly prefer minifigs, I like the details that the larger scale allows on my vehicles, so having Dale to go with mine involved building a larger figure. I also built Andrea and one of the walking dead. 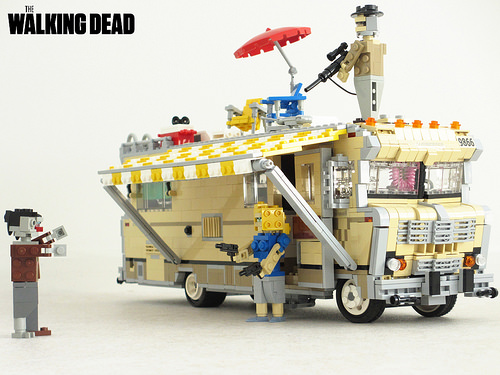 The awning is designed such that it can easily be removed, the vehicle has steering front wheels, the door opens and it has a detailed interior. It took about 30 hours to build, spread out over a few weeks. It’s a big vehicle, at roughly 40 cm/ 16 inches in length, with loads of small details and a full interior. This puts the parts count at roughly 2000, give or take a few hundred (I don’t keep close track of the parts I use). 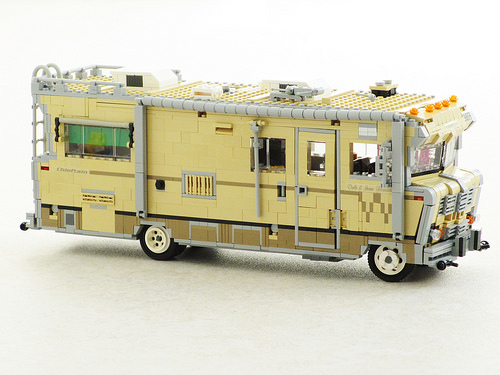 Whilst doing the research for my model, I wanted to find out what others, besides Mr. Zumbi, had already built, so I searched for “LEGO Dale’s RV” and found a construction set of the vehicle by McFarlane Toys. It may be called a construction set, but I wouldn’t touch it with a stick, as it’s really not like LEGO at all. It is a scale model held together (quite poorly, judging from reviews) not by glue, but using a system similar to LEGO. You’d be hard pressed to build anything even half-decent other than Dale’s RV with the parts included. The only part that can be used for just a single purpose on my LEGO model is the red umbrella, which is a genuine LEGO part from the 1979 Fabuland hospital.