LEGO has an all-new wave of Speed Champions planned for 2016, bringing some American muscle to a party that has so far been dominated by European supercars like Porsche, Ferrari, and McLaren. European cars are still in the mix for this year, but first off the starting line for the Americans is a 2016 Ford Mustang GT, a killer car in blue with a classic white stripe. 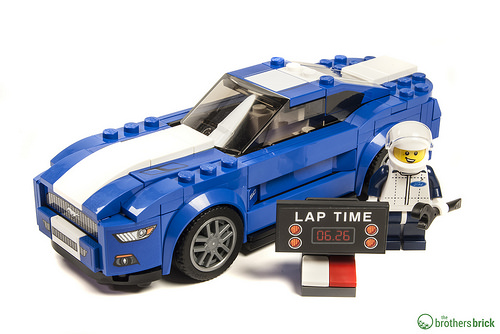 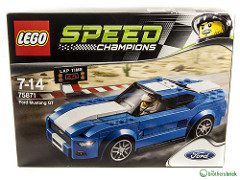 We presume the 75781 Ford Mustang GT will retail for $14.99 USD, like last year’s other Speed Champion solo car sets, and at that price it will be a steal with its roughly 190 pieces. We expect it to be available in March. The box art prominently features the Ford logo, which I must admit is a little odd to see on a LEGO box, but I quickly got over it once I cracked open the set. The backside of the box shows a few angles of the set, and one of the poor driver broken down in the desert with a wheel off the car. It also shows a picture of the real car. 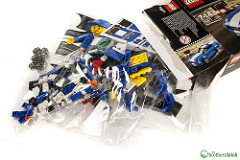 Open the box and you’ll find three parts bags plus the hubs (which have their own bag), the instruction manual, and a rather large sticker sheet—at least for such a small set. The build follows a pretty standard car construction, with a 10-stud long LEGO vehicle chassis at the core, and plates extending forward and back to support the wheels and bumpers. Like most LEGO vehicles these days, and especially the Speed Champions line, there’s plenty of Studs-Not-On-Top work all around. The door panels are composed entirely of brackets with the studs facing out, with even more brackets layered on top to place a row of studs facing down along the bottom edge of the doors. This allows for some nice sculpting to imitate the beveled lines in the Mustang’s doors. The end result isn’t so much accurate as it is evocative, which at this scale works quite nicely. 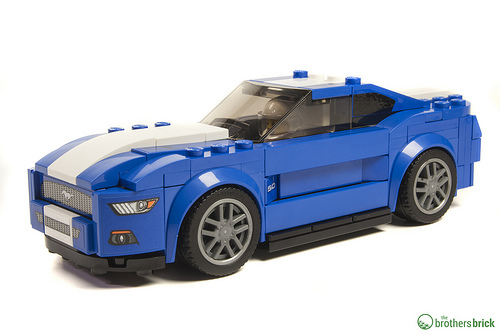 Unsurprisingly, both bumper sections are entirely studs out, and a portion of the front bumper is even studs down. The nose doesn’t look Mustang-like at all until the front 1×4 tile is stickered with the Mustang’s distinct fish-mouth grille. Stickers are in abundance here, with six separate stickers comprising the Mustang’s face, and the end result is passable accuracy, at best. No such problem with the car’s hindquarters, though. Once the stickers are applied for the taillights, the resemblance is uncanny. There’s no question at all that this is a 2010-or-newer Mustang, and you get a little GT emblem. I am, however, very disappointed that all of the stickers are bordered in their respective part’s colors, though. If, for instance, the grille sticker had the silver grille on a transparent sticker (instead of on a blue sticker) it would be easy to construct a red version of this car. As it is, any color rebuilds would have to be done sans most stickers. And speaking of stickers, the rear windscreen is also extremely disappointing. It’s composed of five stickers laid over 4-long slope bricks. I think a vastly superior solution would have been to actually use a rear-facing windscreen, and sticker for the steetmetal, instead of stickering for the windows. 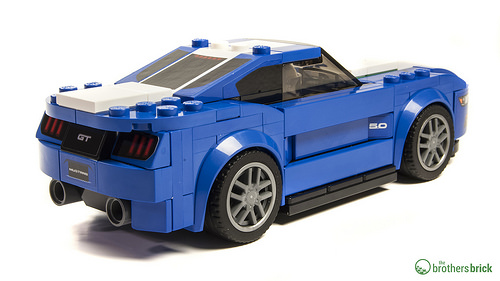 Like all the Speed Champion models, the windscreeen and roof are easily removable for quick access, and a minifig fits comfortably into the sparsely decorated interior. A few bricks are spent in furnishing the cockpit with a white seat, but there’s no instrument cluster—only a steering wheel. 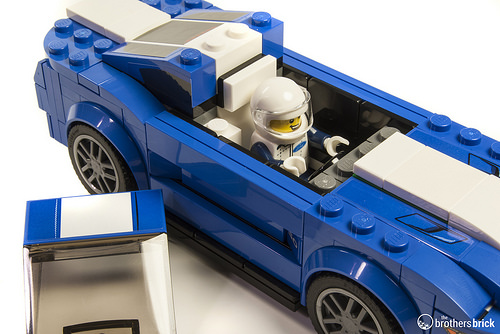 The wheel hubs on the Mustang make their first appearance in dark bluish grey, and you get a choice between the double-five spoke and the branching-V seven spoke. The set also includes a 3×2 curved slope (pictured at right), which is a new brick debuting in a number of 2016 sets. It’s identical to the familiar 3×1 curved slope, except this version is double wide. And if you’re running low on brackets, this is the set for you: a full 30 brackets of various shapes and styles are included.

As pictured on the box, you also get a lap-time display board. This is really just a stand for a stickered 2×4 tile, and there’s not much to say about it. It doesn’t add much to the set, but hey, six free pieces.

The minifig is pretty cool, wearing a white quilted jacket. The jacket features a small Ford emblem on the left breast, as well as large emblem across the back. The torso also appears in this year’s Ford F-150 set, but is otherwise unique. 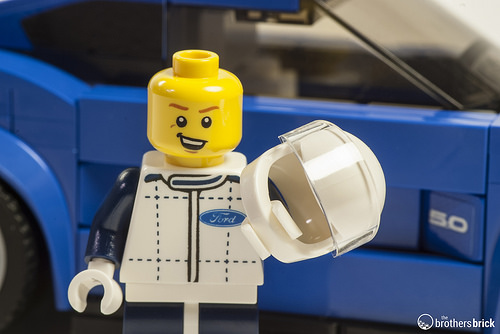 Overall, this car is instantly recognizable as a Mustang. It features solid construction for rugged durability: a must for a car that makes you want to play. All the Speed Champions cars are begging to be raced around your desk no matter your age, and the Mustang is no exception. Aside from LEGO’s heavy reliance on stickers (only the minifig parts are printed), this is a great model, and a great value. It’s good to see American muscle finally making its way into LEGO’s pantheon of licensed cars. 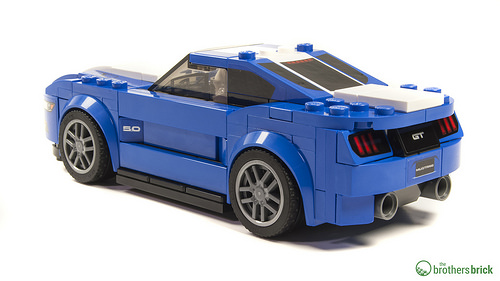