This diorama by Sad Brick is apparently simple…just a tire minding its own business, rolling along a road that cuts through the desert. For those who have not seen the French 2010 movie Rubber, this tire is called Robert and he is sentient. Robert has a few personality issues, perhaps related to being abandoned in the desert as a “young tire” and he soon teaches himself to kill. The violence starts to inflate and Robert  goes on a bit of a killing spree using psychokinetic energy. 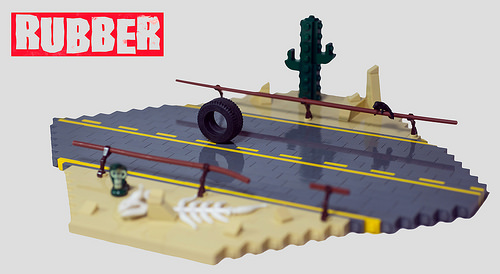 Sad Brick has used depth of field to good effect in this diorama, giving a sense of movement to Robert. The setting is clearly the desert with the sand and the cute cactus add some colour. I especially like the simplicity of the railing and the hint of danger and death using the animals and skeletal remains.

Editor’s note: Our apologies to both the British author of the post and all our readers outside the U.S. for Americanising (see what I did there?) the spelling of “tyre.” Sadly perhaps, the tired pun (heh heh…) in the title just works better in “American.”

2 comments on “Tired and angry with the pressures of life”