The focus here today is “Unit 573 Model No. 9” from chubbybots, which is delightfully stocky while still looking like a serious warmachine. 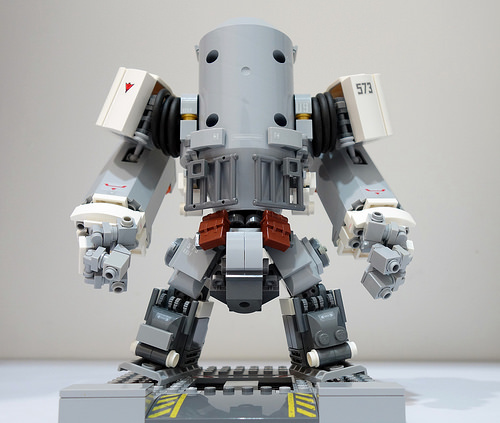 The builder says it is inspired by the Zombie Vs Robot Adventure comic book, and carries no weapons because it “pulverizes its enemies to death.” I mean, as far as battle strategies go, that’s a pretty good one.

As the title betrays, the main semi-circular pieces which form the core of the build remind me of the Cherno Alpha Jaeger from Pacific Rim, and little details like the holes in those pieces and the splashes of color really add a lot of character to this build. Listen, I’m not saying Pacific Rim is one of the most fun movies ever made because it has giant robots slapping around giant-er monsters with shipping containers because the world’s politicians apparently watched way too much anime—wait, that’s exactly what I’m saying.

Now I really want a worthy Kaiju to fight this mech.