We’re taking a break from reviewing all those Star Wars sets to catch a look at something a little closer to home: a good old fashioned racing truck. 60115 4×4 Off Roader hit stores in December, and is currently available for $19.99. It has 176 pieces. 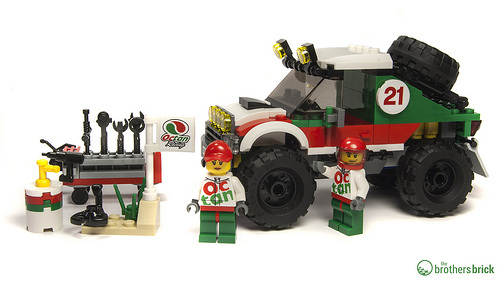 Inside the box are two numbered bags, a sticker sheet, and the instruction manual. The first bag contains the pieces for the two minifigs, accessories, and about half the truck. The second finishes up the truck. The truck is a pretty straightforward build, with almost all of the pieces in traditional, studs-up placement. Only the bumpers use any studs-not-on-top techniques. The finished truck looks great, though. It does suffer a little from LEGO’s long-standing issue of vehicles being too large for scale with the minifigs. This truck’s tires are nearly as tall as the minifigs, which puts it more in line with a monster truck than the rally-racer truck this is modeled after. Despite the size, though, at six studs wide the vehicle is very nicely proportioned, and very, very solid. This truck will easily withstand hours of vrooooming around, even in young hands. And in case you do lose a tire, there’s a spare mounted on the truck bed. 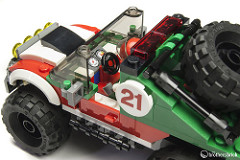 The truck features some great details, like 1×1 round bricks embedded into the chassis to look like shocks (which makes me wish this truck had real suspension). I like the raised row of driving lights on the hood; they make the truck feel like a rally racer. , which is important since there’s no back window. (Edit: I am mistaken. Many recent City vehicles now feature side mirrors.) The roof is held on by just a few studs to allow easy access to the driver. 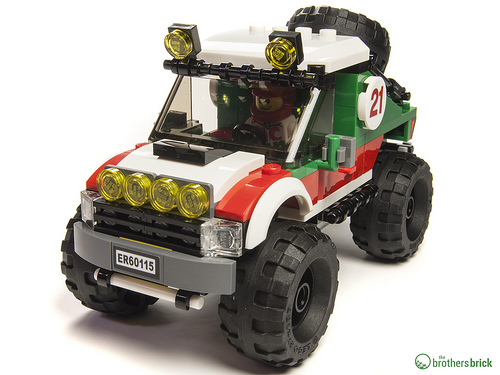 I’m not generally a big fan of stickers, but I chose to apply a few of them in this set. I put the stickers on the flag, the license plates, and the 2×2 round tiles behind the cockpit with the racer’s number. I refrained from putting on the stickers that cover the hood, roof, and sides of the truck bed. The only non-minifig decorated element in this set which isn’t a sticker is the instrument cluster behind the steering wheel, which has a pair of gauges on a 1x2x2/3 slope. 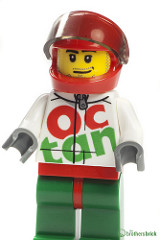 The set comes with three accessories: a tool car, a fuel barrel, and a bit of scenery. They’re pretty simple, so there’s not a lot to say about them, but they do add a nice bit of flavor. The tool cart comes outfitted with the newer set of nine tools, since LEGO moved away from the tool wheel a few years ago. The scenery comes with the Octan Racing flag and a scorpion, so it must be a desert rally racer.

The two minifigs have identical torsos with OCTAN stamped across the front, and the large Octan red/green yin and yang logo on the back. We’ve had dozens of Octan torsos over the years, including a fair few racing suits, but this torso is currently unique to this set. The driver is male, and the technician is female. I do wish the tech had a headset.

In summary, this is a solid set. It’s not the most glamorous, and play features pretty much consist of rolling wheels and your imagination. However, I know that 12-year-old me would have been thrilled with this set, and it’s a good addition to a City collection. It would also be pretty easy for a budding builder to construct additional vehicles in the same style to race with it. 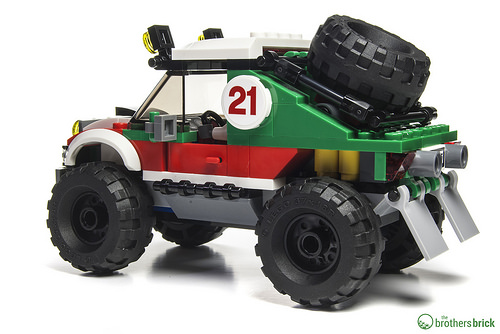