The Palace of Westminster, known to most as the Houses of Parliament, has been built in 1:650 scale by Rocco Buttliere. The model is making its debut at BRICK 2015, which takes place at the London Excel, December 11th-13th. 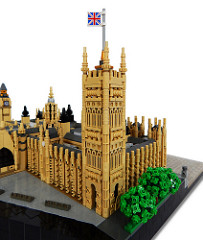 Rocco Buttliere is a fourth-year student in the College of Architecture at Illinois Institute of Technology and his amazing 1:650 scale builds, depicting famous skyscrapers and landmarks, have been the main focus of attention. His collection includes models from eleven global cities including Chicago, New York City, Dubai, Paris, Los Angeles, Toronto, Shanghai, Dallas and of course, London.

Following a successful Kickstarter campaign all 43 of Rocco’s models are making their way to London and will be on display at BRICK 2015. You can find out more about Rocco and his models, including digital downloads of his work, on MOCpages.