At The Brothers Brick we aim to present some of the best fan-built LEGO models. We’re not necessarily used to our own models exploding all over the internet or on the occasions when they do, it is usually because we ourselves have posted them here first. In the last few days, this normal order of things was turned upside down. I went on a little trip visiting family for a few days, but before leaving I posted a few pictures of my latest model, Optimus Prime, on flickr. These were picked up by a number of other LEGO blogs (the LEGO Car Blog and Bricknerd among others) and subsequently pretty much went viral. I was going to write something here eventually, but hadn’t gotten around to making the video that I wanted to include and, because of this, I got scooped. 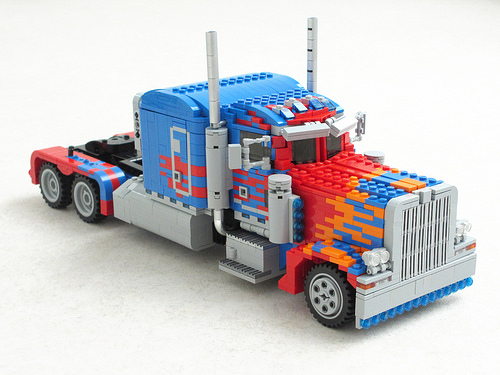 I have finally completed the video and I will use this post to add more info about the build, that I know people have been wondering about, such as why I built a so-called Bayformer rather than a G1 Optimus Prime or whether this model will make its way to LEGO Ideas, so that other fans may eventually buy one. I’ll start with the biggest question, though: is it actually fully transformable or am I a big cheater, who has built two different models to separately represent the robot and the truck mode?

As you can see, the model can indeed go from truck to robot by sliding and rotating various parts. The only exception is that the fuel tanks are separate parts that are pinned to the truck. This is similar to how the toy that I used as the basis for the transformation sequence works. The sequence is complicated and some stuff usually breaks in the process, but having seen videos of people transforming their toy versions, I get the impression that this is normal. 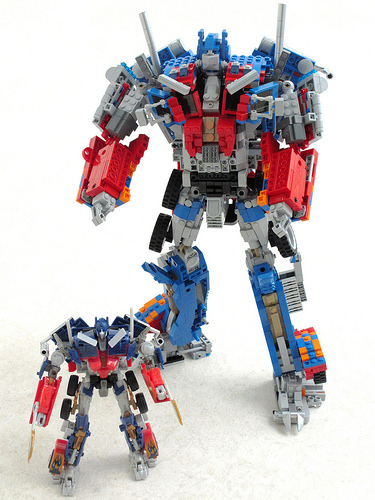 I’m hardly the first person to build a working Transformer in LEGO. We’ve blogged Transformers on many different occasions and, as a child, I myself used to build the original G1 models from the cartoon. The designs from the recent movies by Michael Bay, also known as Bayformers, are rather more complicated than the older models, though, and this is exactly what makes them more interesting to me. I also think that a long-nose Peterbilt looks more attractive than the red and blue cab-over-engine truck used for the G1 Optimus Prime and happen to like building flame patterns. To my surprise, some die-hard Transformers fans hate Bayformers with an almost scary passion and consequently they hate mine. I recommend they go look at Alex Jones’ version from a few years ago or perhaps at some kittens instead.

My Optimus Prime will not be making it onto LEGO Ideas. Even if I could drum up enough support for the project by plastering it all over social media, LEGO wouldn’t touch this with a stick. The Transformers toy line is owned by their competitor Hasbro, who produce rather poor-looking Transformers sets in their own Kre-O range of LEGO compatible construction toys. If you want your own LEGO Optimus Prime, you’ll probably have to build it yourself. This should be easy enough. After all, to quote one commenter on my model, “my nine-year-old can do better”. You have got to love the internet.

8 comments on “I want to introduce you to my friend, Optimus Prime”