Consistent with previous years, the first wave of 2014 Ninjago sets have arrived in stores just in time for this year’s holiday sales rush, and are also now available on Amazon. The roles have been swapped up a bit this time, with the venerable Sensai Wu now evil and Lord Garmadon now the new ninja master. The seven sets of the new wave cover a good spectrum, and we’re beginning our reviews with a mid-size set, the Thunder Raider. 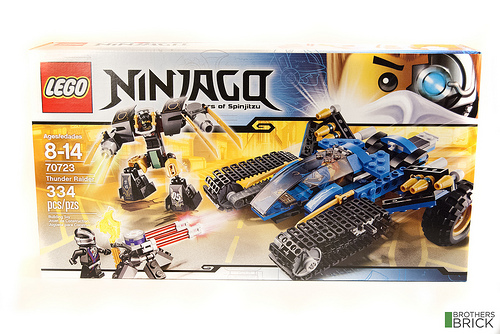 70723 Thunder Raider comes with a USD $30 price-tag for its 334 pieces, making it a pretty good bargain straight off the top, with an average price-per-piece of 8.9¢. For LEGO to still be maintaining a sub-10¢ per piece price in 2013 – an average for which it has aimed for over 30 years – is nothing short of remarkable, especially on one of its mega-hit themes. 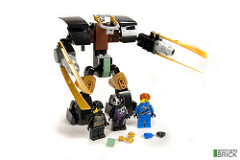 Digging into the set we find three numbered bags, a pair of loose tires, a sticker sheet, and two instruction manuals: one each for the mech and the tank. Bag #1 contains all the pieces to build the small mech, which actually isn’t all that small. It stands about 8 inches tall upon completion. It’s built using a constraction frame (that is, the large ball joints), and even the leg armor pieces are straight out of Hero Factory. If you’ve built any of LEGO’s mech’s in the last four or five years, there are no surprises here, but nevertheless the finished product is fairly nice. The feet contain several of the new Slope, Curved 2 x 1 No Studs in black, which is a new color for that part. Between the mech and the tank, there are eight of those slopes in black. I was also delighted to see that each of the feet contains two Vehicle, Spoiler 2 x 4 with Handle in black, a piece that had thus far been relegated to licensed Cars theme sets only. This bag also contains all three figures. Most of the set’s stickers are applied to the mech armor panels. While nice-enough stickers, I decided not to apply them. 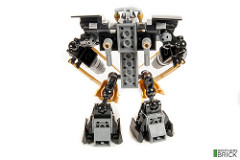 The mech houses one pilot, Cole, who disappointingly has nothing to grab onto while strapped in. I always like mech pilots to have joysticks or at least a computer panel, but Cole is buckled into a harness like he’s on a rollercoaster. I guess the mech is controlled via a mindlink. Each arm of the mech has two giant blades and a cannon, so it’s well defended. With the oversized feet, poseability is high. The back of the mech is pretty sparse, with lots of exposed anti-studs. I feel like the new 2×2 inverted tiles should have been put to good use here. There are two Technic axle pegs stickingout from the shoulder blades, which are used to connect the mech to the rear of the tank. 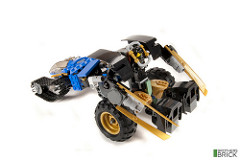 This is a really weird feature. With the mech attached, it looks half-way between the mech hitching an impromptu ride on the back of a hill-billy tank while dragging its legs in the dust, and the tank serving a tow-truck for an out-of-commission mech. I think the effect would be greatly improved if both the tank and the mech shared a color-scheme, but with the mech being black and green, and the tank predominately blue, they don’t create a unified whole at all. 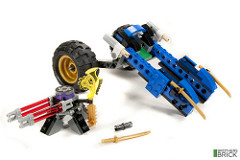 The second bag begins with the small weapons turret, which features the only unique printed piece in the set (there’s also a standard computer tile in the tank). It’s a 2×2 dark grey round tile with a saw-blade pattern on it. There’s not much to the turret: what you see is what you get. The trans-yellow axe it holds is pretty cool; I can definitely see it looking good in some neo-Blacktron bounty hunter’s hands. There is a depression in the center of the circular part that is almost rod-sized. I have never understood why part designers tantalize us with bits that seem like they should be in system, but aren’t. This would have been a perfect opportunity to place a full rod hole through the middle, greatly increasing the usability of the part. 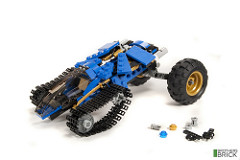 The rest of the bag starts the tank, getting the basic frame constructed. Bag #3 finishes up the set. The tank follows the same style as several other Ninjago vehicles with treads in the front and wheels in the rear. The setup works well, though, and the tank is pretty fun to drive around. I do wish there were springs on the rear wheels to give it a bit of flexibility, but that’s a minor critique. The top of the tank body has a very cool samurai-esque pattern on it. This is accomplished via a 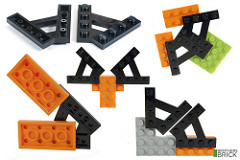 brand new element: two 1×4 plates fused at 45° to each other. This piece appears in several of the new Ninjago sets, and I couldn’t wait to get my hands on one. Putting two of these plates next to each other creates a perfect 90° angle, with a plate sticking off in the middle. But I was a bit disappointed to discover that the plates which are at right angles to each other are misaligned by a 1/2 stud in each direction. The piece will still find plenty of uses, and I understand why the piece is designed the way it is (it’s basically a 1×4 hinge plate permanently fused at 45°), but I think it would have ultimately been more useful if the 90° plates aligned when using two. The main play feature of the tank is the sliding cockpit, which moves back, causing the the blue pattern to reveal itself into several rockets. In a shocking twist, there are no flick-fire missiles (oh happy day), and instead the rockets are held in with traditional Technic 1/2 pins, though given their placement I can’t help but wonder if that is an error. 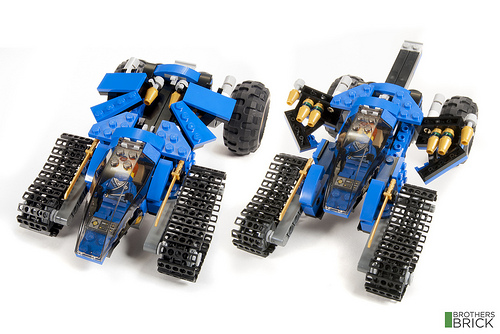 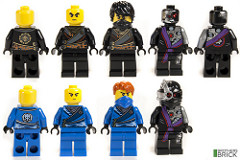 The minifigs here are nothing terribly remarkable. Only the robot (a Nindroid, the instructions inform me) has printed legs. All of the minifigs have front and rear printings which are nice, but not noteworthy. Neither of the humans have double-sided heads, but the Nindroid’s metal pattern does extend to the rear. Each of the ninjas comes with a new bandana piece, which appears to be the go-to style this year instead of the full head-wrap. I’m a bit surprised this bandana didn’t make its debut in the Lone Ranger line, as it seems perfectly fitted to old-timey bank robbers. Nicely enough, an extra of each color is included, for a total of two each in blue and black. 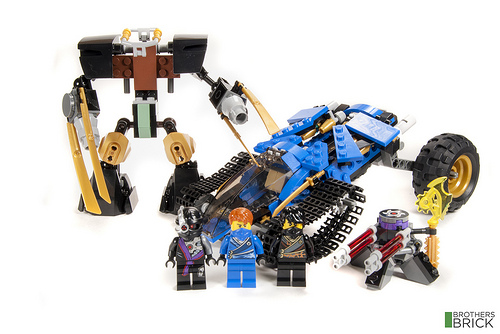 To sum up, this is a good set. There are plenty of good pieces at a good price, including some that only appear in a few other equally-new sets. Both vehicles are sturdy and look nice, and while not revolutionary, are fun. If you’re a fan of Ninjago, this is definitely a good buy, but most other LEGO fans will find something to enjoy here, even if they’re just buying for parts.