Back in 2009, LEGO released two sets (8183 and 8184 ) that got me pretty excited. The reason for my excitement was that these sets contained a car chassis that could be remote-controlled using a Power Functions IR-remote. This would make it relatively easy to build your own relatively compact remote-controlled car. I bought one, but it had about as much directional control as a puppy on a wet floor; it constantly bumped into walls or bits of furniture. It was fast, though. 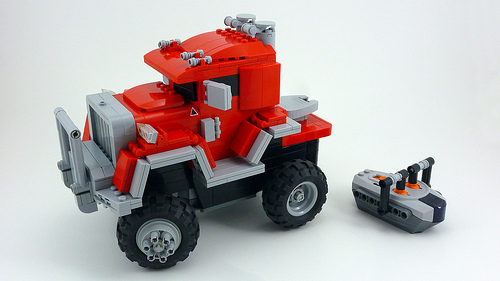 Curtis D. Collins (curtydc) has now used a similar chassis to build his “little big rig”. He too reports that the steering isn’t great, but also that it is a zippy a little RC. I believe that, certainly with those big wheels. I also think it looks pretty cool. Like Barry Bosman’s Monster Masher, it has a certain toy-like quality to it that reminds me of the RC cars that were around when I was a child.

3 comments on “The little big rig is a zippy RC”