The summer wave of Lord of the Rings sets are skewed towards the high end of the price-range, with 79007 The Battle at the Black Gate in the middle at $60 USD. It does have a nice price-to-parts ratio, with 656 pieces. Beyond the fact that it’s a Lord of the Rings set, which I admittedly love, I wasn’t too thrilled about this set. After all, LEGO’s Battle at the Black Gate consists of, well, a black gate. And not much of a battle. 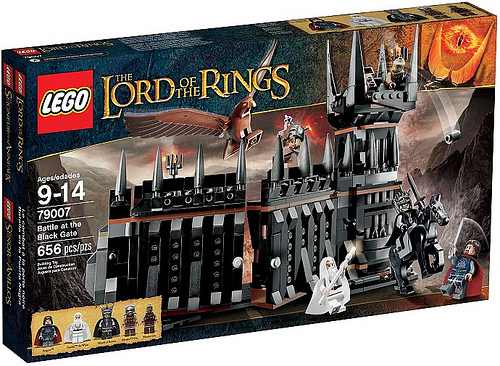 The gate has been scaled down nicely enough, though compared to the monstrously large gate seen on the screen in The Return of the King, LEGO’s seems laughably small. Still, that’s forgivable, since I doubt many people would be interested in purchasing a true-to-scale version of what amounts to a big wall (or be able to afford it). The gate is paired with a small tower, and two stone outcroppings which take the place of the mountain shoulders the gate is nestled between. 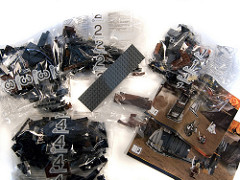 Inside the box are 4 numbered bags, a bag containing the eagle, and a loose dark bluish grey 6×24 plate. The 2 instruction manuals were pretty crumpled, as usual. For a very brief period LEGO a year or two ago packaged instruction manuals in a bag with a stiff piece of cardboard, and it helped immensely. I don’t know why they decided not to roll that out permanently, as it can be very frustrating trying to follow instructions when the pages keep curling up. For the first time in a long while in a set of this size, though, I discovered that there is no sticker sheet. Since I’m not a fan of stickers, I was happy to see that. In fact, the only decorated pieces in this set are the minifigures and animals, which is also a bit of a rarity these days. All 3 of the named minifigs wear capes, and all 3 capes were packaged together. This decision is of no consequence to me, but it is the first time I recall seeing it. As with most recent, large sets, there’s also a brick separator included, which is a nice trend. 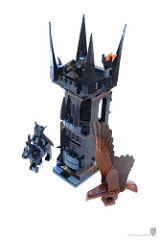 The 4 bags break down into two each for the tower and the gate. The tower has a small postern door in the base which raises vertically with a lever, like an old-fashioned garage door. Both the tower and the gate have a lot of texturing on their surfaces which is accomplished by using mostly small pieces. It reminded me a lot of the building style of many of the adult-fan oriented sets like the modular city buildings, except that here everything is black. The abundance of various 1×1 elements explains the high part count. It’s always nice to get more Studs-Not-On-Top pieces, and this set has plenty. In fact, the tower uses 1×1 Technic bricks in many places where a regular 1×1 brick would have sufficed. The tower is topped with a small single-piece catapult, the medieval equivalent of a flick-fire missile. 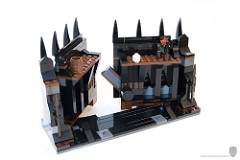 The gate is built on a large, almost completely tiled base. It’s two large gate pieces which swing outward; more of a moving castle wall than anything else. They are secured in the back with large latch on a knob. Beyond being covered in the castle-y version of greebles, there’s not a lot to this. The tower, gate, and rock pieces each clip to each other via Technic pins, so you can change the layout, but only slightly. The rock pieces have to go on the ends, so basically the tower can just be on the left or the right.

The Battle at the Black Gate includes 5 minifigs, 1 horse, and 1 eagle. There are two orcs, which are slightly different from one another. The creepy-as-can-be Mouth of Sauron is a natural choice for this set. His helmet is rubbery and packaged in a small bag. No doubt the head with no eyes and a freakishly large mouth will do service in many fans’ horror dioramas. 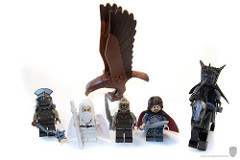 Representing the forces of good are Aragorn in regal garb and Gandalf the White. Both of these versions are exclusive to this set, and I’d guess that fact will contribute heavily to the sales of this set. The Mouth of Sauron’s mount is a black horse. There is armor printed on the horse’s head, which between that and the beady red eyes will reduce its usefulness. Finally, there’s the giant eagle. The eagle comes in both this set and the $200 Tower of Orthanc, so many people simply wanting an eagle will do best to opt for this set at less than 1/3 the price. The eagle is 3 pieces: two wings and a body. Each of the individual elements are completely rigid and non-posable, though the wings connect to the body via LEGO’s standard clip system allowing them to be positioned. The single-piece body doesn’t do much for me, but I can’t wait to try out the giant wings in various MOCs. 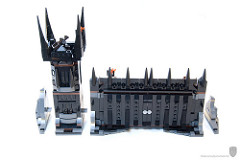 In the end, this is a rather boring set. Despite the high piece count, the final model feels small for the price. The problem here is not one of LEGO’s making; they did an admirable job considering the source material. But when your source is a giant gate, there’s only so much you can do. The build-quality is great; it’s just a boring subject. And it’s hard to have a finale-worthy battle with only 5 minifigs, but I doubt LEGO could have feasibly pushed the price point any higher to accommodate more figs, and making the gate any smaller would have been disastrous. I doubt many people will be interested in buying this set because of the gate itself, so the minifigs are the real selling point here, and they are indeed very nice. If you’re interested in getting your hands on any of the rare or exclusive minifigs in this set, then it’s a must-have. Beyond that, I’d give this set a pass, unless you’re running low on your stock of small black pieces.