I have to start with a confession: I don’t remember ever reading Treasure Island, by Robert Louis Stevenson, but I did see the animated TV series as a child, I saw the Muppets version several years ago and I’ve actually been in Bristol. Unfortunately, none of those experiences are of much use when describing what is going on in the latest scene built by Matthew Hurt, which depicts the Hispaniola in the port of Bristol at the start of its journey. 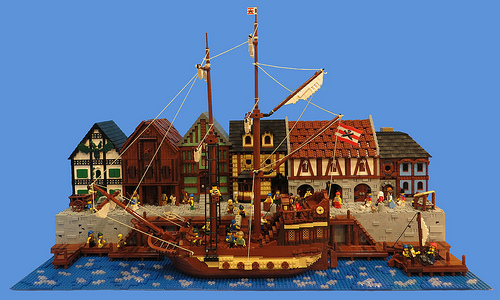 So, instead I’m going to focus on some of the details that make it such a great model. Check out the different types of textures used for the roof-tiles of the warehouses, for instance, or the brick-built sails. Then there’s the weathered look of the quay. And finally, the sails cleverly incorporate log bricks that make them look far more like cloth than if they would be built just out of regular plates and bricks.