I know you are all going to say, “Stick a Megablok in your pie hole Tromas!” But I simply must beat this dead horse: Our community is rather fantastic!!

Case in point Simon Liu’s (Si-MOCs) Operation Oscar: Phase 1. Simon built this large scene to honour a few of his favourite builders, those that inspired and influenced him. Simon left it up to us, the viewers, to recognize who those builders are, but it is rather obvious just who the guilty parties are…all of which are TBB regulars; Fedde (Karf), Peter Reid, and of course our own resident DJ, The Goldman (or as I like to affectionately refer to him, Gold Member). 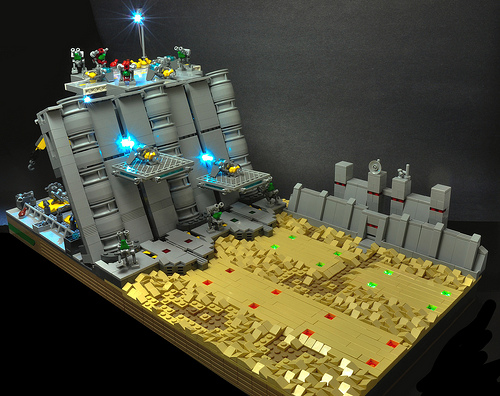 Now it must be pointed out that Gold Member’s influence on Simon’s build is quite prominent, as the general layout of the launch base is straight out of his ‘Gypsy Queens, you are clear to launch’…a hit single that Keith debuted 2 weeks ago. Now if I have learned anything from my time spent kickin’ it with Gold-Member in the TBB club house, it is that despite his epic awesomeness, he is not one to toot his own horn. So I am more than happy to cut into his weekend air time and toot his horn in his stead. So here it, the world debut of ‘Gypsy Queens, you are clear to launch’: 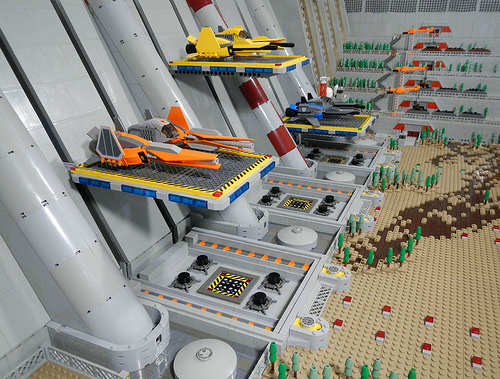 Now, back to the brilliance of the community…not only is Simon’s creation inspired by his favourite builders, but Keith’s build was a direct result of a few more of our regulars, Stijn (Red Spacecat) & Mike Yoder. I’ll just let Keith explain the story in his own words:

Almost two years ago I was fortunate enough to receive the generous gift of a MATSF-5000E Superbanshee II SE from Stijn. To make things all the more strange, the package was sent through middleman Yoder. Although I was stoked to receive such a swooshable fighter, I was a little burned out of building dioramas for starfighters. Over the course of the last couple of years I’ve attempted 3 relatively large scale dioramas, including a cruder version of what you see here. The models failed for various reasons, but mostly because I was struggling with the scale. While I have tried microscale before, it was never on such a large scale and I found it very difficult to grind out the small details that make everything come to life without the trusty minifig to guide me.

The model also includes Stijn’s recent M28-Pig in the pen, as it were, in the lower left hand corner.

So cheers Stijn! I hope it was worth the wait.

So what is the moral of this story you ask?

Don’t think for a second that just because oceans and continents separate us, that we can’t still get together to play LEGO!

Also, please be sure to check out the full set of pictures for both of these brilliant creations, there are simply too many details to pass up:

2 comments on “Group hugs are the best hugs!”