I got the press packet for this last night, with an embargo until 5am today, because the new LEGO Star Wars set 10236 Ewok Village was unveiled at an event in the Czech Republic this morning. Time zones are a pain, but I’d say this set was worth waiting to take a look at!

This set really captures the feel of the Ewok Village from Return of the Jedi, from the massive tress to the raised walkways. It’d also translate well for dioramas of Kashyyyk, and really anything else with trees. There appear to be play-features galore, and a brick-built rope bridge that’s detailed enough to make any adult builder proud. It also appears to have about a million minifigs, if you’re into that… 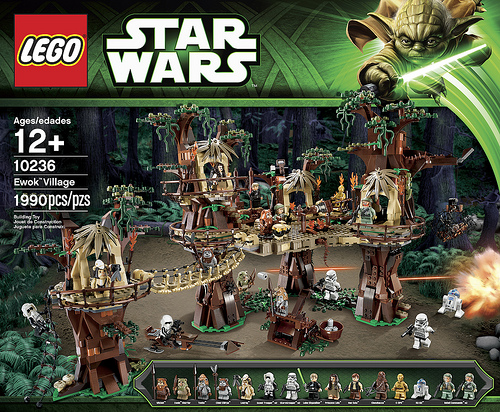 Make sure to check out the designer introduction video, with the awesome Marcos Bessa, too!

Travel to Endor™ and visit the treetop home of the Ewoks. Just like in Star Wars™: Episode VI Return of the Jedi, this recreation of the Ewoks’ forest dwelling is packed with cool functions, including the tree-trunk hideout, secret Lightsaber stash, spider web, net traps, slide, catapults and an elevating throne. Use the rammer function to take out the Scout Trooper’s speeder − just like in the movie! Realistic details include rope walkways, vine and leaf elements, kitchen, food storage area, bedroom and a planning room. The Ewok Village set is the perfect addition to your LEGO® Star Wars collection. Includes R2-D2™ and 16 minifigures with weapons: Luke Skywalker™, Princess Leia™, Han Solo™, Chewbacca™, C-3PO™, 2 Rebel soldiers, 5 Ewoks™ (including Wicket™, Teebo™, Chief Chirpa™ and Logray™), 2 Scout Troopers and 2 Stormtroopers™

Available for sale directly through LEGO® beginning September 2013 via shop.LEGO.com, LEGO® Stores or via phone