My local toy store is stocking up on the first wave of 2013 sets, so I’ll be reviewing several in the near future as I get time. Today, though, I’ll start with one of the new Star Wars sets, the 75002 AT-RT. 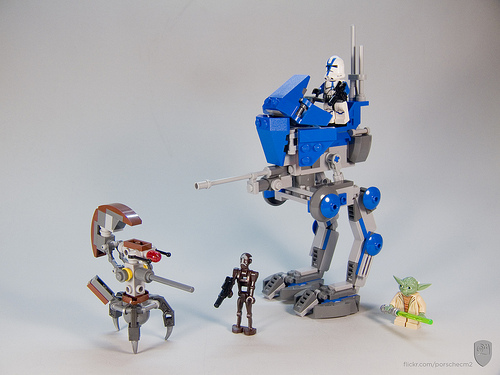 With 222 pieces, it’s actually quite a steal with an MSRP of USD $19.99, and even more so for being a Star Wars set, which notoriously are more pricey than their non-licensed counterparts.

It includes an AT-RT walker, which 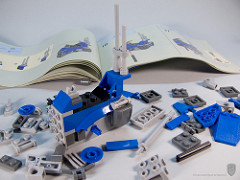 is basically the Clone-Wars equivalent of the AT-ST “chicken walker,” for those who, like me, don’t follow the Clone Wars cartoon series. In order for it to have something to shoot at, a Droideka and battle droid are included. The box contains three bags, one each for the droideka and figs, the legs, and the cockpit. The construction was extremely straight-forward. If you’ve built a two legged LEGO walker before, you’ve basically built this set. The faceting around the cockpit is pretty cool though, and the blue color-scheme does look fantastic here. And a word about the blue pieces: in the past few years, LEGO has been having issues with their plastic, and some shades seeming more transparent and slightly off-color (blue being one), and thus looking cheaper. I happily noted, though, that the blue pieces in this set look terrific, even to someone as picky as I. There’s a small sticker sheet included, as the only printed pieces are the minifigs. I decided not to apply the stickers, especially since two of them 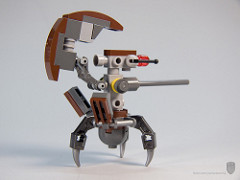 go on rough-surfaced slopes, which is a terrible idea. Those pieces should always be printed.

The Droideka is some huge version I’m not familiar with, though it is pretty awesome, having what basically amounts to an artillery piece in the middle. I’m not sure how big it’s supposed to be in scale, but it towers over the minifigs.

The minifigs in this set are pretty standard if you’re a Star Wars collector, consisting of Yoda, a 501st Legion clone trooper, and some variant 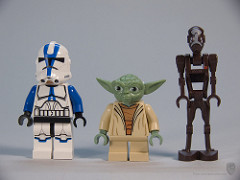 battle droid. I believe the clone trooper is a new design, with yet another new helmet style. (I think. I lost track a long time ago.) The battle droid has a single red dot of printing on the torso, which to me seemed like a pretty insignificant result for LEGO to go through all the extra work of sending the piece through a printer.

I didn’t encounter any unfamiliar or new pieces while building it, though there are some useful pieces. It did have an unusually large amount of spare pieces. However, if you’ve got any of the previous iterations the Star Wars walkers, and you’re not a Star Wars collector, I’d recommend giving this set a pass. I’ve got nothing particularly negative to say about it, but it’s really not a terribly interesting set. It is one of the few Star Wars sets with a high piece-to-price ratio, though, so it would be a good one to nab on a sale when it’s even cheaper.