I’ve just returned from Brickvention 2011 where I had an absolutely awesome time. I’m waiting for more photographs to appear on flickr before I give a proper roundup but there were some excellent LEGO models there.

In the interim I’ll write something about what Mike Pianta (scruffulous) and I displayed: a diorama based on the (presently flooded in) town of Ararat in Victoria, Australia as it was in the year 1972. 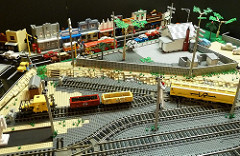 Mike and I started planning this about three months before the event. Our goals were ‘simple’: keep the level of accuracy and detail high, include a large curved track, and work off the grid as much as possible. Not the easiest set of goals but not impossible. I feel like we did manage to achieve them.

However we had one further problem: Mike lives in Melbourne (where the exhibition is) and I live 1800km away in Brisbane. Which meant my contributions also had to be modular enough to survive a plane trip. This was OK until, just days before I was due to go, my city was flooded leaving me wondering if I’d ever make it out.

To cut a long story short I did make it and I got very lucky with the baggage handlers who helped my models survive largely intact. Phew! Anyway, that’s probably all you want to hear about it here. If you have any further questions ask here or on flickr.

And as for the floods: my friends and family are all fine, my girlfriend got stuck on holidays for an extra three days by a flooded road and the city is a mess. Luckily the loss of life in Brisbane was very low but some nearby towns were destroyed by an ‘inland tsunami’ which killed many. Still, compared to those in Rio state we got off lightly.