and LEGO Board Games

is also out now.

I’m certainly excited by these other new releases, but it says something that I’m choosing to build the pig farm first. Seriously, pigs! Four of them! Mmmmm, bacon…

UPDATE: I just finished building the set, and it didn’t disappoint. Aside from the pigs, the set also includes a number of other parts I hadn’t gotten before, starting with the short-brimmed baseball cap and a new exhaust pipe piece that appears to be new in 2010.

The tractor includes a lot of nice lime green to complement your Power Miners acquisitions, as well as my favorite wheels and tires. For play value, it has several connection points compatible with attachments from 7637 Farm 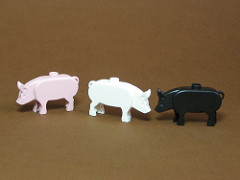 And finally, the elephant (or pig) in the room — the inevitable comparison to BrickForge pigs.

As you can see from the set pictures, the LEGO pigs are similar in style to the new LEGO cows from the farm and 10193 Medieval Market Village.

They’re more rounded, and to a certain extent more realistic than traditional LEGO animals like the dog and horse (with printed eyes and rounded bellies).

BrickForge pigs, cows, and sheep share their design aesthetic with the older LEGO animals. Depending on whether you prefer your animals more consistent with your older LEGO animals or more adorably pot-bellied, there’s still a place for both BrickForge animals and their official LEGO counterparts. I like both.