At BrickCon in October, I learned about the Halo-inspired weapons and the M1 Garand rifle that Will Chapman of BrickArms was working on at the time (see First look at new BrickArms weapons).

Last week, I received my shipment of new 2008 BrickArms weapons, and I’ve been eagerly building and waiting for a break in the snow (!) to take pictures.

Aside from much improved polish, the BA-M5 rifles and BA-M6 pistols aren’t substantially different from the prototypes I highlighted in October, as seen here with a trio of UNSC Marines from Halo: 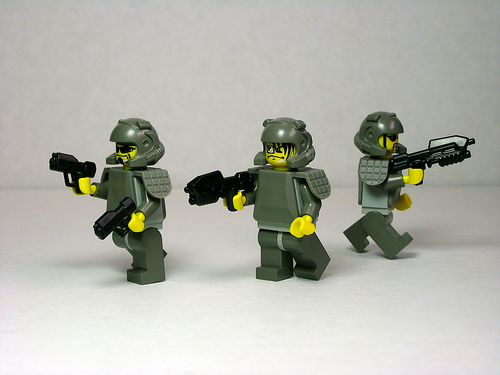 In addition to the BA-M5 and BA-M6, the latest batch of BrickArms weapons includes two more weapons inspired by science fiction. The PKD2019 Replicant Blaster takes its inspiration from Blade Runner, so I whipped up a custom Rick Deckard to “retire” my minifig androids: 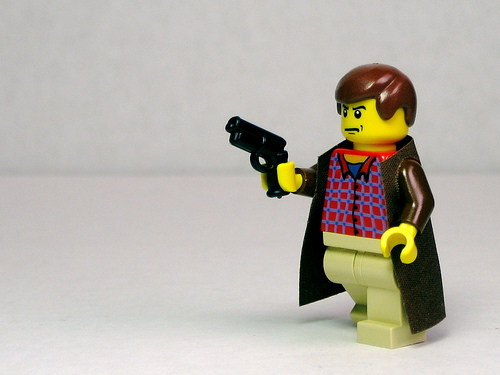 The final M1 Garand rifle is slightly larger than the prototype. Regardless, a minifig can hold the rifle at several points, as demonstrated below by a custom WW2 US Army Sergeant minifig you can also buy from BrickArms: 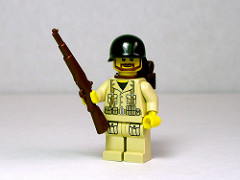 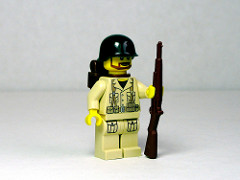 My favorite new BrickArms weapon is the Mk48 Machine Gun. Bundled with a bipod and monopod, the Mk48 resembles the M240 and M249 families of modern machine guns (at least at minifig scale). Other additions to the contemporary arsenal are the MP7 PDW and M84 Stun Grenade (aka “flashbang”): 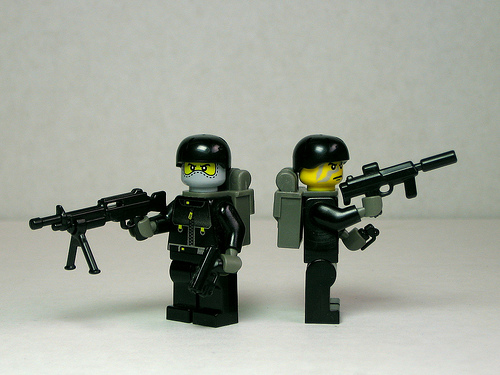 The Bipod from the Mk48 can attach wherever a minifig hand can attach, including other BrickArms weapons, such as the PSG1 Sniper Rifle (with S.W.A.T. sniper below). A Monopod can convert your M1 Garand into an M14 (with Marine, circa 1965): 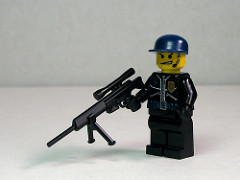 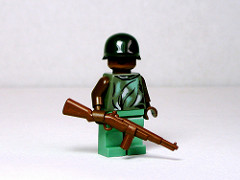 The other sci-fi-inspired weapon is the Auto-9, from RoboCop (below): 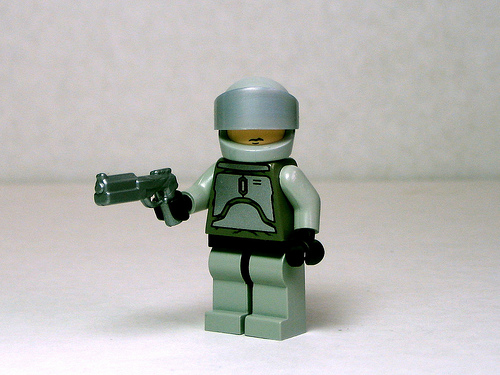 The priciest thing I picked up this time from BrickArms was the Medkit ($8). The Medkit includes a syringe, scalpel, and bag. Although BrickArms sold a limited run of 30 World War II medic minifigs a while back, I missed them when they were $25, and the final minifig went for $162.50 (!) on eBay.

So I made my own (mostly), using the new Medkit, an Indiana Jones bag, and bits of the Sergeant: 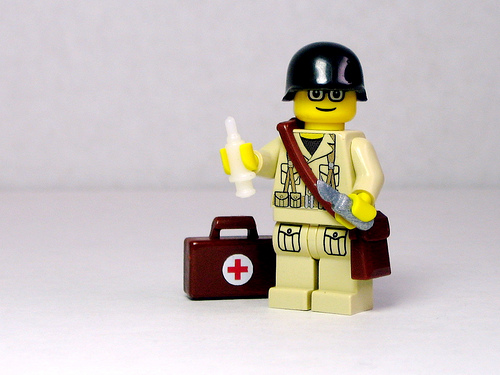 As I said last February in my first BrickArms review, BrickArms weapons compare well to official LEGO elements on both price (on the secondary market) and quality. This certainly holds true for the 2008 weapons, which continue to extend the building possibilities provided by our favorite little plastic bricks.

For more photos of the new weapons and accessories, see my BrickArms photoset on Flickr.

Also check out our previous coverage of BrickArms here on The Brothers Brick: