Anyone who is a fan of The Stormlight Archives novels will be thrilled to see Tim Schwalfenberg‘s LEGO take on The Chasm, a world in which the only source of light comes from cracks in the sky.

This creation is jaw-dropping. I love the color transitions as the light darkens deeper in the canyon. It really adds to the sense of depth in this build. How far does it go down? Sure, you can count the brick height along the chasm walls, but all the detail poured into this build gives the illusion of being near-bottomless.

The other detail I want to point out is the excellent plant work. From swampy saplings curing their limbs creepily to the vined flowers reaching upward for a glimpse of daylight. Like the color transitions, the way the vines wrap themselves along the rocky crevasse adds to the sense of how deep you are down in the ground.

I could gaze at this brilliant creation all day, though that might not be a wise idea. Watch out for chasmfiends!

If you ever watched Avatar: The Last Airbender, you probably thought that things like flying bison sounded cool. Because bison are cool, and things that fly are even cooler, right? Or perhaps you loved Fantasia 2000, with the flying humpback whales. Whales don’t fly, but wouldn’t it be neat if they did? Perhaps that was the inspiration Tim Schwalfenberg had, as he created this delightful build of one of the great flying whales of the Eastern Cloud Sea, carrying a passenger who could well be from The Last Airbender based on his looks. Rolled up cloth and vinyl elements make for a nice detail on the back, and I always love seeing barrels made from two half-barrels joined together. Add in a spectacular harness, and you have a creation ready to soar above some lands, gallivanting through some airwaves. 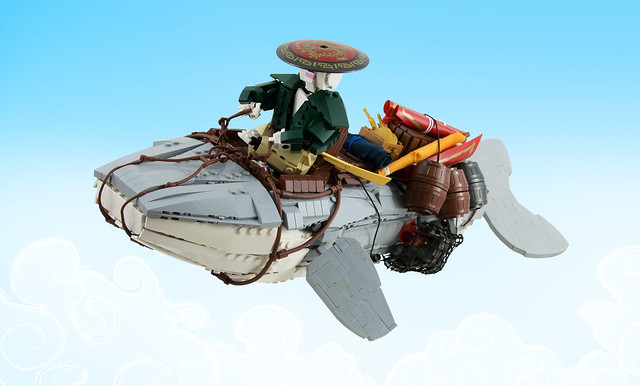 I love it when two things that I like and know something about come together, like peanut butter and jelly or LEGO and Roman history. Tim Schwalfenberg brings us a slice of the early days of Rome, when they were still constructing the Forum.

Or perhaps it is later in Rome’s history when they were building a second, third, or fourth forum. I suspect it is early, though, since the streets are not yet paved and there is still active construction going on with a wooden crane lifting up a block of marble to add to a second building. If that’s not deep enough, please excuse me while I put on my scholar hat for a moment. It should be pointed out that not everything is completely accurate here: the Romans generally built with brick or concrete and faced the buildings with marble, rather than building the whole thing of marble; and also, Caesar Augustus, the first Emperor of Rome (reigning from 27 BC to AD 14) is said by the historian Suetonius to have said, “I found it of brick, but left it of marble”, since marble was rarely used before Augustus’ day.

However, taking my scholar hat off, this is an impressive build, with lovely columns of clearly Ionic styling. The structure conveys the grandeur that is proper to that mighty republic of the past. The trees are particularly nice, with the whips coiled around in an organic way, and evoke the stone pines of Rome well. The folded minifigure capes do a great job as togas, too; you can see a few senators, perhaps, near the sundial in their white togae candidae. My favorite piece usage, though, is the inverted jumper plates for the ladders. The whole thing is impressive. Augustus would be proud.