Back in June, I posted a collection of Eighties film and TV vehicles, which at that time consisted of four cars (and fifth one that wasn’t in the picture). Lots of people offered me suggestions for which vehicles to build next and I kept going.

By now, a few months later, I’ve got 18 vehicles. They are not all from the Eighties anymore and a few British ones sneaked in. I am really enjoying building these. Unlike many LEGO car builders, I don’t have it in me to come up with my own cool or custom car designs. I tend to build scale models of existing vehicles and most are bog-standard production versions. The cars that are the stars in movies and TV series, however, are often a bit more flamboyant. Building them means I still get to build the scale models I like so much, but with a few extra sprinkles on top and the often funny characters that go with them. There are a few obvious vehicles still missing from my collection, such as cars from any of the James Bond movies, but I am not about to stop this any time soon.

TBB newcomer David Alexander Smith has a unique style of building that proves (once again) that you don’t need a million parts to create something original or make an impact on the hobby. David makes excellent use of negative space in his rendition of everyone’s favorite super-spy. Three cheers for minimalism. 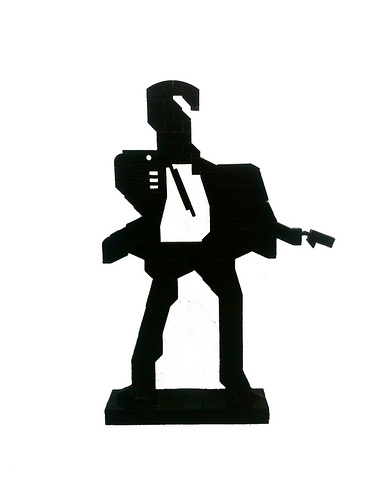