The greatest foes in comic history are always two sides of the same coin. Peter Parker (aka Spider-Man) is a scientifically minded young man; an underdog driven to use his powers to responsibly serve his city. Norman Osborn (aka The Green Goblin) is something of a scientist himself; a billionaire who only craves more power, even at the expense of anyone who gets in his way. These two have been engaged in a constant struggle on the comic book page since the early 60s. Now LEGO is bringing their battle to toy shelves once again, this time arming each of them with a giant mech suit. Mechs for these two might seem weird at first glance, but both characters regularly rely on tech like web shooters and goblin gliders. So maybe this upgrade isn’t that far-fetched. Besides, putting Marvel characters into giant mechs seems to be a formula that’s working for LEGO. But does the success of the formula repeat itself here? Let’s find out. 76219 Spider-Man & Green Goblin Mech Battle is a 296-piece set available April 1st for US $19.99 | CAN $24.99 | UK £17.99. 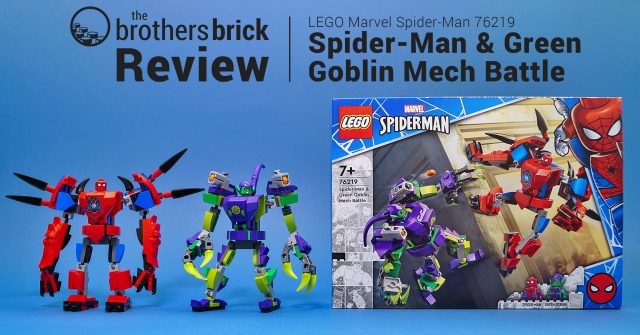