Did you know that most frogs do have teeth? They are very tiny and not actually used for chewing. But this frog is on a whole different level. I’m pretty sure you don’t want to make him angry! Nobu_tary, a LEGO builder we’ve featured many times, is the witty creator behind this creature. Usually he makes LEGO food like a banana as well as posable figures, but this is a refreshing new addition to his collection! 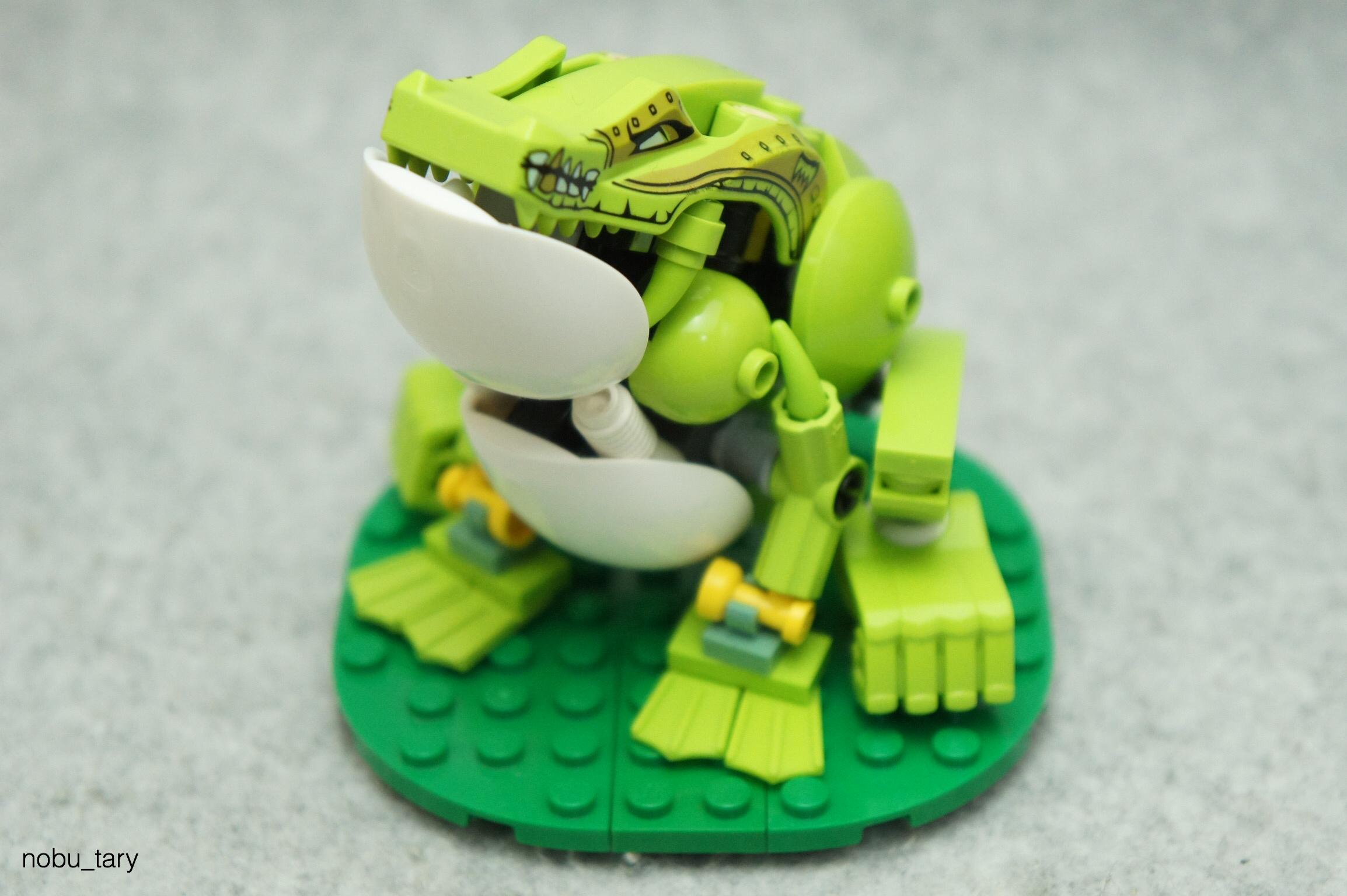 The body-shaping here is really terrific, and the use of that head piece brings it to life. You might recognize the part from the retired LEGO Chima Speedorz set, 70103 Boulder Bowling.  It’s one of those pieces that are difficult to find another use for, but he’s done it perfectly here! This is one frog I wouldn’t mind dissecting… and putting back together of course!

This weekend saw the grand opening of the Legends of Chima water park at LEGOLAND California. The layout and design of the park looks awesome. But instead of having to pore over a mere 2D map of the place, wouldn’t a brick-built 3D version be even more awesomer-rer? Well that’s what LEGOLAND master builder Joel Baker thought, so he designed one! 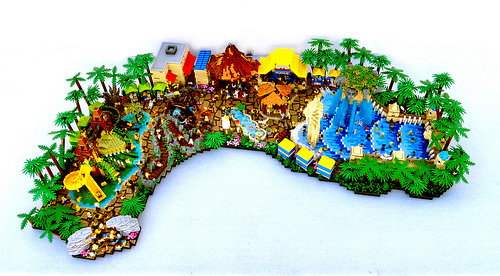 Joel was actually pool-side as he relayed some cool facts to us about the creation:

“This was built in one week by myself and four other master builders. It weighs 60 lbs and has roughly 55,000 pieces. It is currently part of a media tour and has made it’s way through several cities including New York, Boston, Texas, and Arizona. I hope it ends up in the park, as it would be our first brick built map – I believe the kiddos would enjoy figuring out where they are and where they want to go by pointing at LEGO instead of the usual (but still cool) paper!” 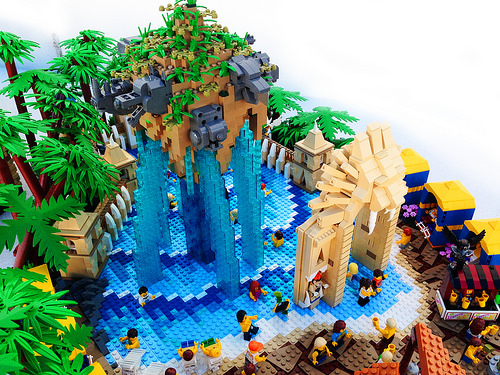 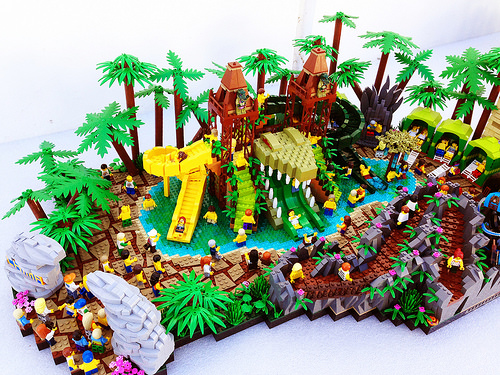 This week we’re doing things a little differently. I’ve gathered up three Chima sets that piqued my interest, mostly because they don’t often get much attention. We’ve got 70203 CHI Cragger, 70204 CHI Worriz, and 70107 Skinnet. 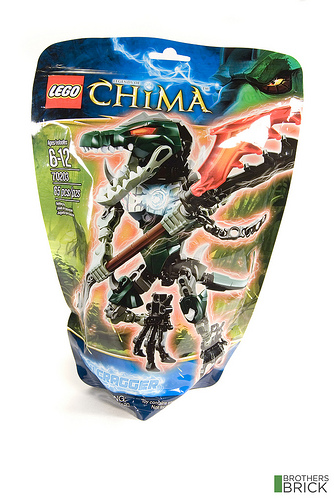 We’ll jump right in with 70203 CHI Cragger. With its 65 pieces priced at $14.99 USD, the price per piece is higher than the average System set, but this isn’t a System set. This line comprises action figures, ala Bionicle or Hero Factory. The 6 sets in this line each come in plastic bags with a zip-top. LEGO has moved to using bags instead of canisters for all of their action figures since dumping the Bionicle line, and it’s a real shame. The bags never look good on store shelves or pegs, and they’re hard to re-use, even with the zip-top. 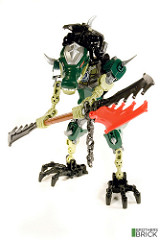 As part of the Chima world where fierce animal factions battle each other, Cragger is a humanoid crocodile. I don’t follow the Chima lore, but I believe both Cragger and Worriz are “bad guys.” There’s not a lot of meat here sink your teeth into as far as building techniques, since these models are targeted to kids who don’t enjoy construction toys, or as an add-on to the more traditional Chima sets. The build is extraordinarily straightforward, consisting of a basic frame with armor pieces attached. The most interesting bit is the odd neck brace that cants the head forward to give Cragger a looming stance. There’s also the bit of chain dangling from the double-ended polearm. As the larger chain made of removable links, it seems highly useful if you could get enough of them; sadly you only receive four links here. The blades on the weapon were bent pretty sharply coming out of the bag, though they are made of quite malleable plastic. The armor pieces connect either with a clip that attaches to a ball joint, or with the double rod connection familiarized in the Hero Factory line. There were only a few pieces I didn’t recognize here. The head and jaw pieces, of course, are unique to this set, and in all likelihood will 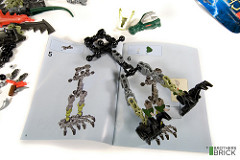 remain that way, though I think the castle line could get good use out of it as a dragon head. The weapon blades come only in this and the Worriz set I got, and in one Hero Factory set. They are pretty uninteresting pieces, though. Finally, there’s a new type of Technic connector; it already appears in a handful of sets from a variety of lines, but it’s still worth noting. I did also enjoy getting some ball joint pieces in olive green. 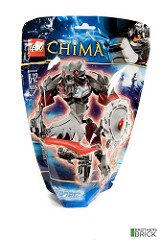 70204 CHI Worriz clocks in at only 55 pieces, for the same price as Cragger at $14.99 USD. The basic frame is pretty similar to Cragger, with the armor pieces slipping over the rudimentary structure. The wolf head seems eerily reminiscent of The Witcher’s emblem from the RPG series. The hands are ludicrously oversized, but the fingers are articulated, which is a nice departure for this sort of figure. The inside of the hands disguise a more traditional and sturdy Technic axle connection for the weapons. The weapon blade here was also bent upon opening the package, but it seems flexible enough to not cause issues. The saw blade on Worriz’s left hand I believe is intended as a shield, not a weapon, though it does spin, so perhaps it is both. 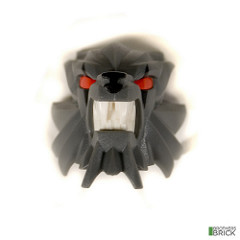 The back of each bag of the CHI maxi-figures pairs two kits together to create an even larger figure. Worriz and Cragger pair together to make either a giant Worriz or a giant Cragger. I was going to build them to see how interesting the giant figures were, but after finishing the two regular models, I ran out of excitement for building more simplistic action figures. The instructions have to be accessed on the LEGO website–I was hoping to find instructions in the back pages of the booklets, like Creator or Technic sets. I took a close look at the giant figures, though, and there was no innovation of design; essentially each figure just cannibalizes the other to add extra leg and arm joints to make a larger gangly figurine. It would have been far more interesting for each pair of sets to combine to create a completely new figure. 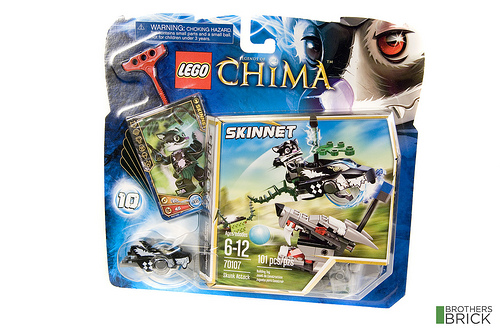 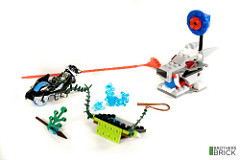 And finally that brings us to the System set in this roundup: 70107 Skinnet, one of the many Speedorz sets, and has 97 pieces for $14.99 USD. Speedorz, for the uninitiated, are tiny ripcord-powered vehicles that shoot unpredictably at various targets and ramps in some sort of game. The back page of the instruction manual attempted to explain the game using only pictures and a thumbs-up symbol, but I’m not sure I understood beyond pointing the Speedorz (is the singular Speedor, or is it still Speedorz?) at the included ramp to hit the wolf target. There’s something about picking up the little ball that falls out of the wolf target’s mouth, too, along with some cards that are included. Nevertheless, the ripcord-powered Speedorz work remarkably well, and provide great amusement to my cat as they shoot across the floor. 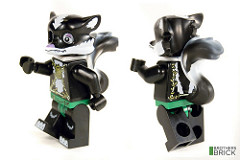 Anyway, the instructions start with building the Speedorz, which consists of a weighted wheel base, and a minifigure locked in via a top facade held on with Technic pins. At this point the instructions paused to let my little attention-deficit self go play with my Speedorz before even finishing the set–or in fact the Speedorz, which gets more decorations in the next step after the break. The ramp is well made but uninteresting. The wolf-head target is a nice bit of sculpting, and the mouth flies open when you hit the target. The real gem here, though, is the minifig, which is an anthropomorphic skunk. I’ll be honest, it was my interest in the minifig that led me to purchase this set in the first place. The figure is not only unique to this set, but there are no other skunks in Chima at all (or elsewhere in the LEGO oeuvre). This is, quite possibly, the cutest official minifig I’ve ever seen. Like other Chima figs, the head consists of a helmet over a traditional minifig head, both of which are printed all around. The tail is a neck bracket, and is made of a dual-injection swirl of white and black for a rather nice-looking finish. There is also a Fox made of the same pieces (but differently colored) in another Speedorz set, but I haven’t been able to find that set in a store yet, though it is available online.

Unless you are particularly invested in the Chima line, the CHI maxi-figs are probably not a good investment. Bionicle-style builders are, of course, a major exception, since many of the pieces are excellent for that, and the addition of joint pieces in olive is surely a welcome addition. The Speedorz set is also a likely pass, unless, like me, you can’t resist getting a minifig skunk. However, I’ve spotted frequent sales on both the Speedorz line and the maxi-figs line, so it may be possible to pick them up for a good discount.