With Ogel’s mind-controlled army growing by the day, Alpha Team’s chances are looking more and more slim. To make matters worse, Rockmonster 2000 has sided with Ogel to provide him with a mutant dragonfish! Armed with harpoons and an awesomely dated early 2000s slick design, there is nothing that can stop their evil plan to take over the world! 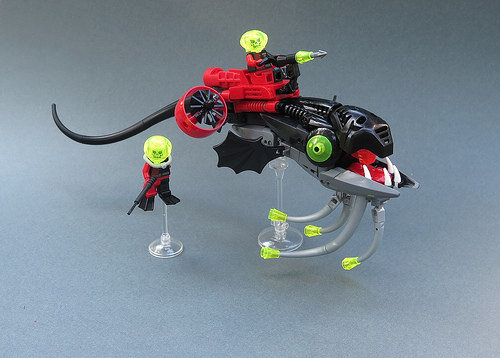 The build is actually an entry for a Bionicle building competition–as if there were not enough early 2000s style in this creation already–which you can see if you look closely at the parts used. The current round of the competition asks for contestants to build a Bionicle creation capturing a particular theme, and Rockmonster 2000 has done an incredible job with his, since there’s no mistaking the Alpha Team in this one. There are various Bionicle parts, like a kanohi mask, and constraction elements like large claws used across it, sprinkled with just enough System bricks to flow perfectly. Alpha Team is a very nostalgic theme for me personally, but I think we can all agree that this creation is great even without its gloriously ridiculous background!